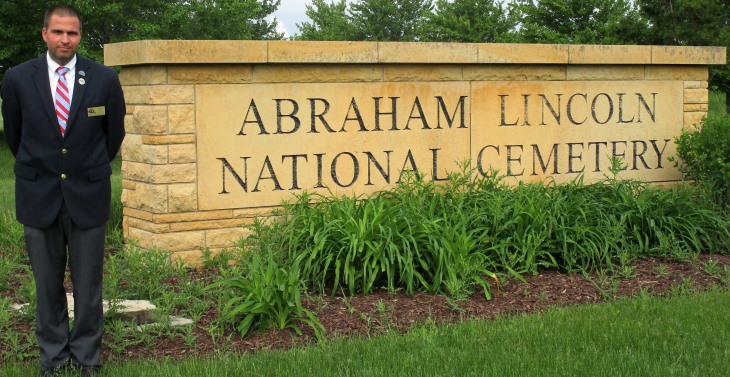 The following was taken from a Memorial Day speech given by Christopher Hill, Sr. at the Abraham Lincoln National Cemetery.

When I was growing up, I didn’t idolize action figure heroes or famous actors the way other children did. To me, heroes were made up of flesh and blood. They were the men and women who were willing to put all on the line. From every branch of the military to our police force and firemen, these were the heroes I looked up to. In my desire to be just like my heroes, I discovered the stark reality of what it means to be a United States soldier and I learned the true meaning of Memorial Day.

I have known a young soldier from the Bronx who ran out into an open field to save one of his brothers lying wounded on the battlefield. I have seen a soldier sacrifice his own life when he threw his fellow soldier to the ground and used his own body to protect him from the full blast of a rocket propelled grenade. These men were heroes.

While I was deployed to Baghdad Iraq, I had the misfortune of witnessing an event that would forever change my life. During our patrol, our lead vehicle was hit by an Improvised Explosive Device; also known as an IED. The vehicle rolled over and trapped everyone inside. While under heavy fire, the soldiers from the second truck ran over to check on the wounded and attempted to free those that were trapped. As they pulled the wounded from the truck, one of the soldiers was shot in the leg. Despite his bullet wound, this solider continued to pull members from the devastated vehicle.

That man, that soldier, that hero … he saved my life. He was later killed from another gunshot wound while trying to evacuate the area. Had that young and fearless man not been willing to step forward when so many others would not have, I would not be alive here today to speak in his honor. This is why Memorial Day is so much more than just another holiday or an excuse to have a family BBQ. This is why I hold so much respect and love for the men and women who lie within Abraham Lincoln National Cemetery. This is why I find it so important to stress to everyone that the bond that is created between soldiers is a brotherhood that transcends all generations, all creeds, and all races. It has the ability to survive beyond the grave.

Maya Angelou is quoted saying the following: “I’ve learned that people will forget what you said, people will forget what you did, but people will never forget how you made them feel.” I will never forget the way my fellow soldiers and Veterans make me feel on a daily basis. The deep pride I have to be “one of the few” is only matched by the overwhelming love that we all share for this country and what we stand for. I am so honored to have the privilege of working here at Abraham Lincoln National Cemetery. As cliché as it may sound, every day here is Memorial Day for us. With every rifle volley and every sounding of TAPS, we know that another brother or sister has come home to rest. Our entire staff has the privilege of taking care of each individual Veteran that is buried here as if that Veteran was a member of their own family. We strive for excellence here at Abraham Lincoln so that our Veterans may be sent home with a final farewell full of honor, passion and dedication.

Several months ago I had a service for a World War II Veteran. Sadly, he had no family present and the funeral director was filming the service to send to the family. The funeral director, the honor squad, and I took it upon ourselves to bear witness to his final farewell. Due to having no family there, one of the squad members and I sat on the front bench of the committal shelter and represented those who could not make his service. I did not know this man and I did not know his story but I knew that he was a Veteran that deserved to be honored to the fullest of my abilities. So, there we sat while the service continued and I had the honor of receiving the flag in place of his loved ones.

I am not required to go above and beyond my basic duties, but I want every Veteran today to know that they are loved and they are valued no matter if they have a large family that supports them or if they are one of our many homeless Veterans. I hear you. I see you and you are one of my own. At the end of our days, may we all have someone who is willing to take pause at our descent and lift their hands in one final salute to a life well lived.

I have never envisioned myself as a hero; never claimed that title for myself. But then I wonder, does any humble man ever truly see himself as the world sees him? All these thoughts led me to some deeper questions. Such as, have you ever pondered the word courage before? When we think of men or women who are courageous, do we only envision our heroes? In order to have courage, must you be fearless and bold? Oddly enough, the original definition of courage has nothing to do with fear or the lack there of.

According to Brene Brown, shame researcher and best selling author, the root word of courage is cor – which is Latin for heart. Brene says that the original definition of courage meant to speak one’s mind by telling all of one’s heart. Ponder that for a moment. In today’s society, speaking from a place of complete vulnerability is just not something most people feel comfortable with. Why would I share my darkest emotions with anyone? Why would I bring that out into the daylight to be seen by all? Why would I give anyone the opportunity to poke and prod at these wounds? Because true courage is being willing to speak of the shame and pain that is left within the heart of a survivor. I know I am not the only man to have this secret within his heart, but I am a man who is willing to go where few have gone.

Survivor’s guilt is a taboo subject. We do not talk about it. We do not even acknowledge it. What is there really to say? We survived when so many others did not. But if I could write a letter to heaven, to the men I’ve lost on the battlefield or who died within my own arms… this is what I would say.

Most of Memorial Day is spent grieving your deaths. But I want to celebrate your life too. You were the men that had my back, and I feel like I’ve failed to have yours. The evidence is right here in front of us, after all. I’m standing here today and you are not. My brothers, I never intended to fail you. If I could trade my life for yours, you know I would have! Your absence has left a void that I can never fill.

There are still nights, even years beyond your deaths, where my dreams are filled with visions from those days. I awaken soaked in sweat and shaking to my wife’s hand on my back while she mumbles something about it being “all right.” But it hasn’t been all right since you left us. Do you know how hard it is to walk through this life and pretend that my heart isn’t broken inside? Every loss has been another hammer stroke against me, and eventually the cracks have broken wide – never to be repaired.

I look out in front me at this crowd gathered today, and I know that I am not the only broken heart here. I know the stories of my World War II Veterans who share a story over the rim of a glass about their best friend that they lost on the beaches of Iwo Jima or during the attack of Pearl Harbor. I know the burdens of my Vietnam Veterans who watched their medic be gunned down in the dense jungle while the enemy slipped away like smoke. I know the personal pain of my generation of Veterans who stood in dusty foreign streets watching for the sniper that just took down the man next to them. Whether it is 70 years or 10 years since our boots have touched the field of battle, we all remember the blood, sweat, and tears. It is written on the fabric of our souls. The echoes of war reverberate within our heads.

So on this Memorial Day, not only do I grieve for you, my brothers, but I grieve for those of us who have been left behind. As I attempt to write this letter to you, I realize that trying to explain the depth of my sorrow is a futile exercise, but you deserve to hear that this world has not been the same since your departure. I can only pray that one day we will be reunited … whether it is in heaven or the halls of Valhalla. There are some days I still catch the glimpse of your ghosts at the corner of my vision and just out of my reach. Take mercy upon this man who lacks the words to properly say, “I’m sorry.” I’m sorry that I didn’t have your backs when you had mine, I’m sorry that I am here and you are not.  But thank you for what you have done for me.

Thank you for giving me the opportunity to live my life. I will always remember that each one of your lives is engraved upon my heart. Never to be forgotten. I know they say grief heals in stages, but this broken heart has yet to un-see your deaths. Rest in peace, my brothers, I love each of you.

Christopher Hill, Sr., is a cemetery representative at the Abraham Lincoln National Cemetery in Elwood, Illinois.