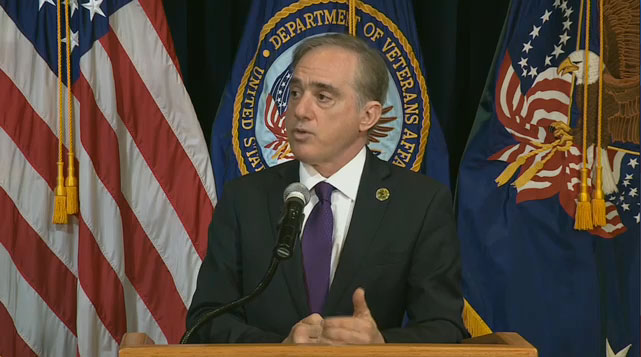 Today U.S. Secretary of Veterans Affairs Dr. David J. Shulkin announced his decision on the next-generation electronic health record (EHR) system for the VA at a news briefing at VA headquarters in Washington.

I am here today to announce my decision on the future of the VA’s Electronic Health Record system, otherwise known as EHR.

I wanted to say at the outset that from the day he selected me for this position, the president made clear that we’re going to do things differently for our Veterans, to include in the area of EHR.

I had said previously that I would be making a decision on our EHR by July 1st, and I am honoring that commitment today.

The health and safety of our Veterans is one of our highest national priorities.

Having a Veteran’s complete and accurate health record in a single common EHR system is critical to that care, and to improving patient safety.

Let me say at the outset that I am extremely proud of VA’s longstanding history in IT innovation and in leading the country in advancing the use of EHRs.

That said, our current VistA system is in need of major modernization to keep pace with the improvements in health information technology and cybersecurity, and software development is not a core competency of VA.

I said recently to Congress that I was committed to getting VA out of the software business, that I didn’t see remaining in that business as benefitting Veterans.  And, because of that, we’re making a decision to move towards a commercial off-the-shelf product.

I have not come to this decision on EHR lightly.

I have reviewed numerous studies, reports and commissions, on this topic, including the recent commission on care report.

At VA, we know where almost all of our Veteran patients are going to come from — from the DoD, and for this reason, Congress has been urging the VA and DoD for at least 17 years — from all the way back in 2000 — to work more closely on EHR issues.

To date, VA and DoD have not adopted the same EHR system. Instead, VA and DoD have worked together for many years to advance EHR interoperability between their many separate applications — at the cost of several hundred millions of dollars — in an attempt to create a consistent and accurate view of individual medical record information.

While we have established interoperability between VA and DOD for key aspects of the health record, seamless care is fundamentally constrained by ever-changing information sharing standards, separate chains of command, complex governance, separate implementation schedules that must be coordinated to accommodate those changes from separate program offices that have separate funding appropriations, and a host of related complexities requiring constant lifecycle maintenance.

And the bottom line is we still don’t have the ability to trade information seamlessly for our Veteran patients and seamlessly execute a shared plan of care with smooth handoffs.

Without improved and consistently implemented national interoperability standards, VA and DoD will continue to face significant challenges if the Departments remain on two different systems.

For these reasons, I have decided that VA will adopt the same EHR system as DoD, now known as MHS GENESIS, which at its core consists of Cerner Millennium.

VA’s adoption of the same EHR system as DoD will ultimately result in all patient data residing in one common system and enable seamless care between the Departments without the manual and electronic exchange and reconciliation of data between two separate systems.

It’s time to move forward, and as Secretary I was not willing to put this decision off any longer.  When DoD went through this acquisition process in 2014 it took far too long.  The entire EHR acquisition process, starting from requirements generation until contract award, took approximately 26 months.

We simply can’t afford to wait that long when it comes to the health of our Veterans.

Because of the urgency and the critical nature of this decision, I have decided that there is a public interest exception to the requirement for full and open competition in this technology acquisition.

Accordingly, under my authority as Secretary of Veterans Affairs, I have signed what is known as a “Determination and Findings,” or D&F, that is a special form of written approval by an authorized official that is required by statute or regulation as a prerequisite to taking certain contract actions.

The D&F notes that there is a public interest exception to the requirement for full and open competition, and determines that the VA may issue a solicitation directly to Cerner Corporation for the acquisition of the EHR system currently being deployed by DoD, for deployment and transition across the VA enterprise in a manner that meets VA needs, and which will enable seamless health care to Veterans and qualified beneficiaries.

Additionally we have looked at the need for VA to adopt significant cybersecurity enhancements, and we intend to leverage the architecture, tools and processes that have already been put in place to protect DoD data, to include both physical and virtual separation from commercial clients.

This D&F action is only done in particular circumstances when the public interest demands it, and that’s clearly the case here.  Once again, for the reasons of the health and protection of our Veterans, I have decided that we can’t wait years, as DoD did in its EHR acquisition process, to get our next generation EHR in place.

Let me say what lies ahead, as this is just the beginning of the process.

Once again, I want to thank the president for his incredible commitment to helping our Veterans and his support for our team here at the VA as we undertake this important work.

This is an exciting new phase for VA, DOD, and for the country.  Our mission is too important not to get this right and we will.