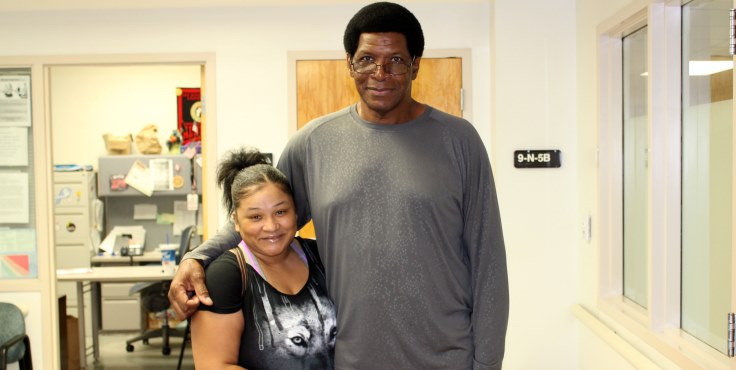 Do you need some inspiration to keep you on track with your health and wellness goals? Meet Donald Johnson who lost more than 67 pounds with the help of the Overton Brooks VA Medical Center’s MOVE! Weight Management Program.

The 62-year-old U.S. Army Veteran struggled with his weight for more than five years, was prediabetic and suffered from a host of preventable health-care illnesses, to include elevated blood pressure and depression before joining the MOVE! Program.  Johnson’s doctor suggested VA MOVE! and urged him to enroll in the weight management program.  The day he enrolled, he weighed 317 pounds.

“My doctor told me that if I didn’t lose weight I would become diabetic,” Johnson said.  “I had trouble getting around like I used to, tying my shoes, getting in and out of the bathtub.”

Johnson began the eight-week diet and exercise group where he lost 22.4 pounds.  He tried to lose weight with other diets such as low-carb and the Slim Fast diet plan with little success. Since his initial weigh in and enrolling in MOVE! Johnson has lost a total of 67.6 pounds. His goal was to weigh 250 pounds.  On May 9, he met that goal weighing in at 249 pounds, meeting on an individual basis with his dietician and MOVE Program Coordinator Emily Walker.

“Mr. Johnson is one of our success stories. He’s an inspiration to our other Veterans who are just starting their weight-loss journey,” Walker said.

Because of the MOVE! program, Johnson’s life has improved.  He now finds it easier to do daily tasks, stays active with his lawn care service and enjoys bike rides and walks with his wife.  He makes every effort to stick to the plan of what he learned in MOVE! with nutrition.

For more information about VA MOVE! Weight Loss Program for Veterans please call the MOVE! Coordinator for Overton Brooks at 318-990-5023.