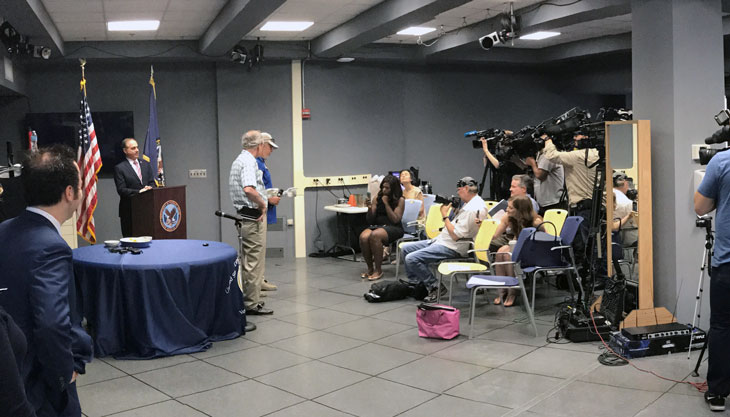 The event also included a demonstration of the technology by the first Veteran amputees to receive the device.

A collaboration between VA, the Defense Advanced Research Projects Agency (DARPA) and industry, the LUKE Arm is the product of nearly eight years of testing and research, and holds the potential to significantly benefit Veterans and others with upper-extremity amputations. Unlike less-advanced prosthetics, the entire LUKE arm can move as one unit, reducing the labor-intensive process of controlling one joint at a time. The LUKE arm also features the first commercially available powered shoulder, with up to 10 powered degrees of freedom.

Simply stated, the LUKE arm will help restore Veterans’ ability to perform a variety of one and two-handed activities. With accompanying rehabilitation, recipients can use the LUKE arm to perform tasks, such as drinking from a glass, picking up small pieces of food to eat, cooking or gift-wrapping presents.

Fred Downs and Artie McAuley are the first Veterans to receive the LUKE arm, the world’s most advanced commercial prosthetic.

“The LUKE arm is a shining example of why VA exists,” Secretary Shulkin said. “There is no commercial market for this type of technology. The patient population is simply too small to motivate private companies to pursue these types of advancements on their own. This is why VA and its research efforts – efforts that could not be replicated in the private sector – are so important.”

Fred Downs and Artie McAuley are the first Veterans to receive the LUKE arm.

“The LUKE arm is a great tool, especially for high-level amputees like me,” McAuley said. “I’m amazed by the technology, and the level of flexibility and full range of motion, which allows me to do much more independently.”

Fred Downs added, “The technology has definitely been an improvement in my ability to perform day to day activities, most notably in grasping. It’s useful when an opposing hand is needed, in the workshop or while cooking.”

In fiscal year 2016, VA provided care for nearly 90,000 Veterans with amputations, more than 20,000 of whom had upper-limb involvement.