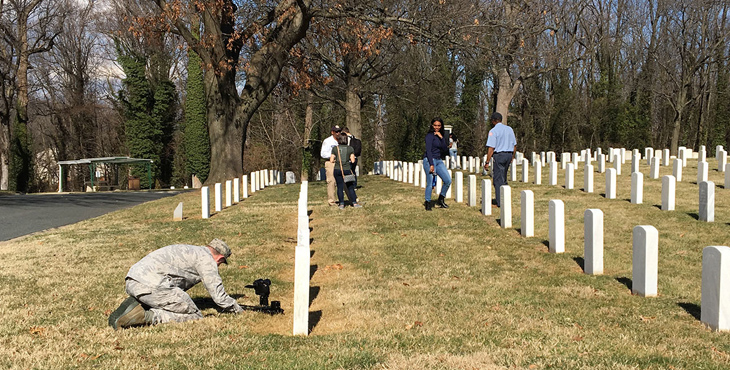 When the students at the Defense Information School (DINFOS) were told that they would be doing a project at a VA national cemetery, many of them were surprised. Not because of the subject matter, but for simply the fact that they didn’t know such a place existed.

For the class of 20 soldiers, sailors, Marines and airmen, a visit to Baltimore National Cemetery and Loudon Park National Cemetery was something unique. It was a chance to tell stories about Veterans of the past from the perspective of the service members of today. Jeff Lacap, DINFOS broadcast instructor team leader and U.S. Army Veteran, felt that a trip to a VA national cemetery was necessary for the students to gain both understanding and perspective.

“We wanted to familiarize our students with the cemetery’s layout and scope of operations,” Jeff explained. “The students gain a valuable knowledge by researching and then crafting a story about a Veteran. Some of these Veterans’ stories may hit home, as they see commonalities between those interred and themselves. This is a fantastic opportunity to train with great content.”

DINFOS gives their students the chance to work with local organizations and businesses within the Fort Meade area to produce their final capstone presentation. This presentation is required to graduate the course, with the goal of preparing students for their permanent duty stations. For the students who produced their videos at a VA national cemetery, this project was more than just a final grade; it was also about honoring the Veterans who came before them.

The results speak for themselves.

Pfc. Max Elliott, a member of the Ohio Army National Guard, and a student of this DINFOS class, says the opportunities he’s been given by DINFOS have expanded his skills and had a personal impact.

“I’ve been in the National Guard for less than a year and this course has been a great learning experience,” Elliott said. “DINFOS provides world-class training to every branch of the military. We will take this training and give back to the people who served their country; either as a Veteran or a family member. Their stories inspire me.”

The students produced several videos and promos from this experience, which they in turn gave to the National Cemetery Administration after their final project. The hope was that the messages they captured, and the stories they told, could be shared long after the students graduated and went onto their duty stations. These videos, by service members, for Veterans, are available on the National Cemeteries playlist on YouTube.

Jessica L. Tozer, a U.S. Army Veteran (2002-2006), is the web communications officer and digital services lead for VA’s National Cemetery Administration. She was a communications specialist and content manager for the Department of Homeland Security Science and Technology Directorate from 2015-2016. From 2011-2015 she was the social media content manager and editor-in-chief for Armed with Science, the Department of Defense science and technology blog. She is a lifelong science fiction fan and a huge supporter of the Veteran community.