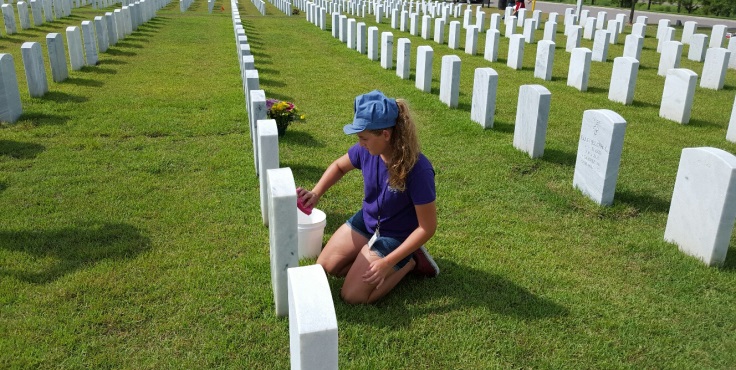 Seven years ago, when Marine and ex-Oakland Raider football player Glenn Ellison walked the few hundred yards from his headquarters at The Parent Help Center in Jacksonville, Florida, to the Jacksonville National Cemetery, he came looking for a job, not for himself, but for the dozens of at-risk youth he mentors in the summer.  By chance, he ran into 23-year Florida National Guard soldier and Afghanistan Veteran, Larry Feltner, a maintenance worker at the national cemetery.  The bond was immediate.

Ellison hosts two summer camps each year—one for boys and one for girls.  Camp Consequence was created for parents, children and families.

While parents are learning new coping skills, children learn about responsibility and consequences in an austere environment—away from television, music and smartphones.

A big part of the success of this program takes place at Jacksonville National Cemetery.  Children arrive at the cemetery prepared to work.  A typical day begins with the National Anthem, salute to the flag and the Pledge of Allegiance. Then they clean headstones, weed flowerbeds and pick up trash.  They are also taught military customs and courtesies.

“Very quickly they learn to take off their hats and stand at attention when they hear TAPS,” said Feltner. “They also learn about being respectful of those interred here, to talk quietly, not lean on upright headstones, etc.”

Another important piece of the Parent Help Center program takes place year-round. Every third Saturday, Ellison brings children and parents in the program to the cemetery. They meet at the main flagpole where former military members stand before bronze emblems representing their branch of service and share stories of sacrifice.  It’s powerful and emotional.  The impact is palpable.

“The children see an honorable option for their future,” said former Jacksonville policeman, Wally Butler.  “My son was in and out of the program several times.  This summer he’ll graduate from basic training at Fort Sill.”

Wally’s wife, Becky, served as the Girls Camp director from 2013-2016.   She took this year off to see her son graduate.

“The girls show real ownership of the cemetery,” said Butler.  “When Veterans or family members see all those young people out there caring for their loved ones, it gets quite emotional.  They’ve even stopped to take pictures with the teenagers.”

Often when the children return to Jacksonville National Cemetery, they’ll point out the section they worked on or wonder ‘why there’s a weed growing in my cemetery.’

Families participate in The Parent Help Center program from all over the country.  Former Heisman Trophy winner, Charlie Ward and his wife, Tonja, found the program worked for their son.

The youngest of their three children spent last summer in camp.  So far the turnaround has been remarkable.

“We needed an assist. We tried everything and we are thankful we found this program,” Tonja Ward said. “After completing camp, our son earned four citizenship awards, made the Honor Roll, and even came back as a camp helper.”

“The program has a high rate of success,” said Richburg, who retired from the U.S. Army in 1994.  “At the same time, we get to teach children about duty, honor and service, and show them how we take care of the men and women who served the country.”

James Theres is a speechwriter for the National Cemetery Administration in Washington D.C. He is a U.S. Army Veteran of the Persian Gulf War and a 10-time VHA Communication Awards recipient while serving as a public affairs officer in Jackson, Mississippi, and Tomah, Wisconsin. The 30th of May is his first documentary film.