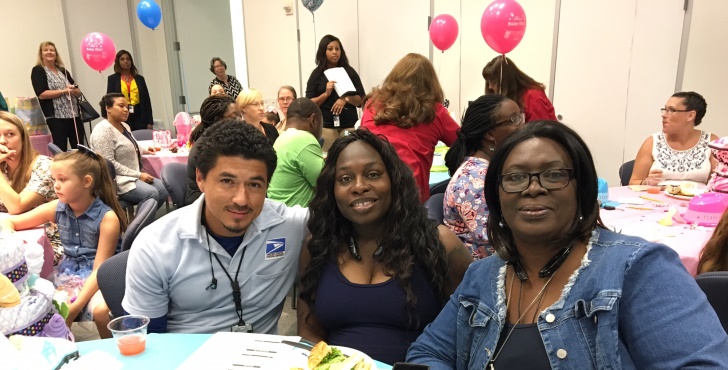 “We are thrilled to honor our women Veterans with a baby shower,” said Dr. Rola El-Serag, director of the facility’s Women’s Health Center.  “We owe these women Veterans a debt of gratitude for their service to our nation.  In addition to providing them with our top quality VA health care, this shower gives us a tangible way to say thank you.”

Volunteers from the Daughters of the American Revolution, Soldiers Angels, the VFW Auxiliary and the Kingwood Area Republican Womens group worked with the VA to plan the shower, which gave the Houston-area women Veterans, many of whom have been discharged from the military in the very recent past, a chance to connect with other women Veterans and be honored for their service in the military.

“I so appreciate the way the VA has stepped up for me through my pregnancy,” said Esther Walker, a Navy Veteran who is due in early October.  “Their maternity care coordinator has been there for me throughout my pregnancy and really taken care of me.  I was so excited when I got the invitation to the shower.”

Rachael Brown, a Navy Veteran who also attended the shower, brought a very special guest to the event — her six-week-old son Kane.  “I was really touched when VA invited me to attend the shower and invited me to bring my newborn along,” she said.  “I had a great time and it meant a lot.”

“Currently we have more than 12,000 women Veterans registered for care at the Houston VA and that number continues to grow as the word gets out about our new Women’s Health Center and all we have to offer our women Veterans,” said El-Serag.  “Currently about 300 of our women Veterans are pregnant, and we had a great time celebrating this special time with them at the shower.”

Diapers, bottles, baby toys and lots of fun and camaraderie were the order of the day for the approximately 20 Veterans who attended this special event.