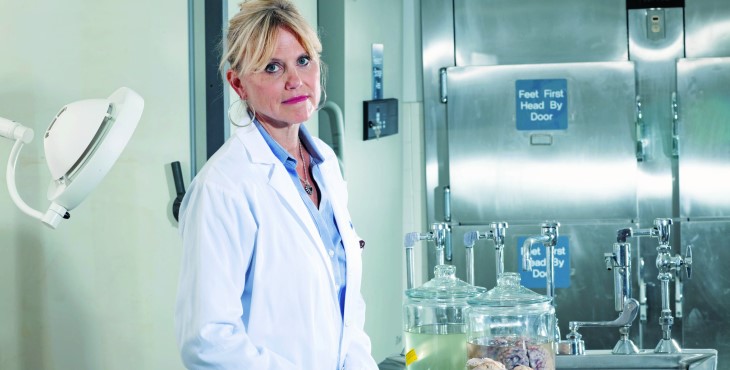 Dr. Ann McKee is known as a leading authority on chronic traumatic encephalopathy (CTE), a degenerative brain disease commonly found in athletes and military Veterans who participated in physically intensive contact activities, such as boxing, football and the military battlefield. McKee is the director of the CTE Center at Boston University (BU) and chief neuropathologist for VA Boston and director of the brain banks for VA Boston and Boston University School of Medicine, including the VA-BU-Concussion Legacy Foundation’s (CLF) Brain Bank, the world’s largest tissue repository focused on traumatic brain injury (TBI) and CTE. The bank has more than 425 brains, including more than 270 diagnosed with CTE.

Recently, McKee received international media attention for her breakthrough study analyzing the brains of American football players, which found CTE in 99 percent of NFL players, 91 percent of college players and 21 percent of high school players. The research, which was published in the Journal of the American Medical Association (JAMA) on July 25, was the largest number of CTE cases ever studied.

1. Years of your research confirm that CTE is real, and now your recently published comprehensive study in JAMA shows that 99 percent of the brains of American football players you studied had definitive CTE. How is this research relevant to Veterans?

There are many parallels between concussive injury experienced during contact sports and exposure to blast and concussive injury experienced by Veterans. In addition, many Veterans are athletes, and play football, soccer, baseball, volleyball or participate in boxing. Our research shows that the long-term effects of concussive and blast injuries on the brain can be very similar, regardless of how the brain injuries occurred.

2. How is this research going to be pertinent to other studies that deal with other types of brain diseases such as TBI, post-traumatic stress disorder (PTSD) and amyotrophic lateral sclerosis (ALS)?

While the current report included only football players exposed to repetitive head impacts and the development of CTE, we are also analyzing the relationship between repetitive head impacts, TBI and the development of PTSD. We have many brain banks at the Jamaica Plain VA including a VA PTSD brain bank, a VA TBI brain bank and a VA ALS brain bank. We use the same procedures and methods for all the brain banks, so we can directly compare the results of one study to another. We are very interested in the relationship between TBI, CTE, PTSD and ALS, and we think there are some overlaps among the conditions.

3. Not only are you VA’s chief neuropathologist for its VA Boston Health Care System, but you direct many brain banks for VA Boston as well as Boston University School of Medicine. Can you share some breakthroughs on brain research that have impacted Veterans and service members, and do you believe there will eventually be a cure for degenerative brain disease?

The absolutely best way to understand the long-term effects of repetitive head impacts, concussion and blast injury on the brain is to thoroughly analyze the brains of individuals who have died. Because of the many generous brain donations to our brain banks, we now know that the earliest changes of CTE involve the deposition of the protein Tau in a distinctive pattern around small blood vessels in the brain. We also know that inflammation and leakiness of the small blood vessels accompany this early Tau deposition. By identifying the earliest changes of CTE and understanding how and where it begins in the brain, we are hoping to find a way to stop or reverse it; that is, a way to effectively treat CTE. We are confident that if we can identify and treat this disease in its earliest phases, we could cure CTE, as this is a disease that becomes progressive and produces severe neurodegeneration over time. Right now, our major research focus is on ways to diagnose early CTE in living individuals and how to treat CTE once it has begun.

4. You are considered one of the top researchers in the field of neurodegenerative brain diseases, so the scientific community often looks to you for guidance. From whom do you learn?

Every patient has a unique story and every brain that is donated propels our research forward. I’m deeply grateful to the families who make a brain donation as every brain teaches us more about brain disease and is a gift to future generations.

5. What piqued your interest in degenerative brain disease and how did it become a professional passion?

The brain is infinitely fascinating and uniquely complex. Everything we do or feel or think involves the brain. The brain is responsible for our emotions, our memories and our athletic skills, yet so many facets of the brain remain a mystery. Studying the brain allows us to understand a little more about these mysteries.

About Dr. Ann McKee:  McKee was born and raised in Appleton, Wisconsin. She holds an undergraduate degree from University of Wisconsin; a medical degree from the Case Western Reserve School of Medicine and completed her residency training in neurology at Cleveland Metropolitan General Hospital and fellowship training in neuropathology at Massachusetts General Hospital. She was an assistant professor of Neuropathology at Harvard Medical School from 1991-94; associate professor of Neurology and Pathology at Boston University School of Medicine; chief of Neuropathology Service for the New England Veterans Administration Medical Centers (VISN-1) and director of the Brain Banks for the Boston University Alzheimer’s Disease Center, Chronic Traumatic Encephalopathy Center, Framingham Heart Study and VA Chronic Effects of Neurotrauma Consortium; and neuropathologist for the National VA Amyotrophic Lateral Sclerosis Brain Bank.

Paula A. Paige is a public affairs officer in VA’s Office of Media Relations. Before joining VA, she was a public affairs officer at Naval Air Station Patuxent River, Maryland. Paula is an award-winning journalist, who worked in various leadership roles at the Star-Ledger Newspaper in New Jersey, the Stamford Advocate in Connecticut and Newsday in New York. She is also an Air Force Veteran with more than 26 years of service, including active duty, Air National Guard and Air Force Reserve.