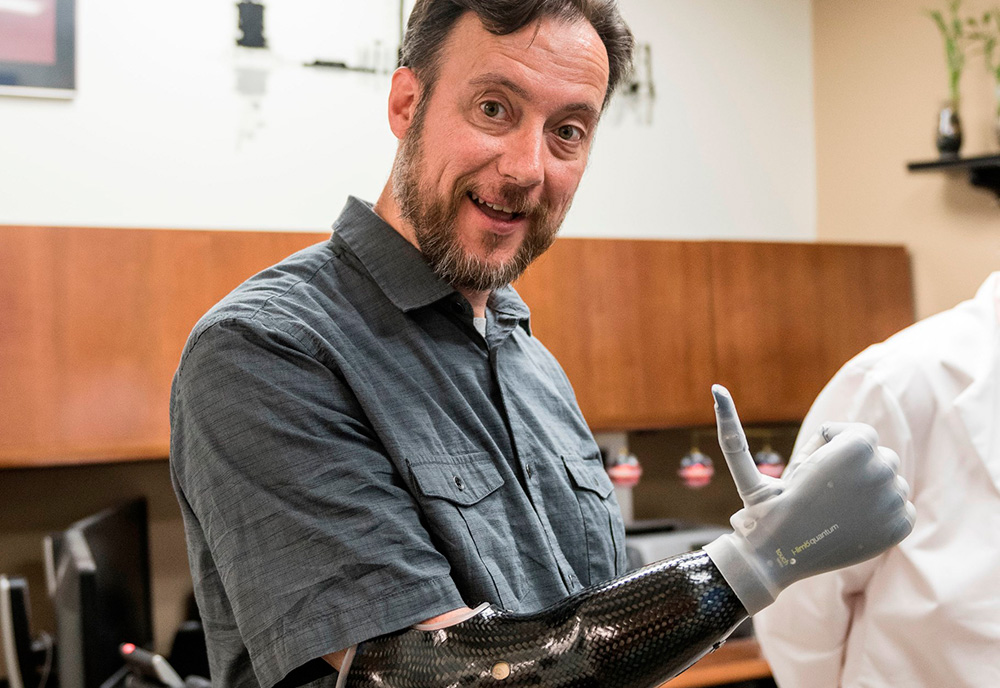 Veteran Daniel Glanz lost his right hand while serving in Afghanistan 12 years ago. Today, Glanz has a brand new prosthetic hand with world-class technology which gives him the ability to adjust hand functions on the fly in ways that were not possible in the past.

For the past 10 years, Glanz has been coming to McGuire VA Medical Center to receive the latest in prosthetic hand technology. This past spring, he was fitted for an iLimb Quantum prosthetic hand, which is programmable with a smartphone app and can change functions with a simple gesture.

The device can be programmed with up to four different hand settings at a time. Each setting is activated by the wearer gesturing with his arm to the left, right, forward or back.

This allows Glanz, who served in the Army Reserves from 1993 to 2006, to instantaneously switch between various modes. For example, to shake hands, he can move his arm slightly to the left. With

The iLimb Quantum has dozens of modes used to make the prosthetic hand hold a wide variety of different poses. Photos by: Jason Miller

a slight gesture to the right, he could change to a pinching grip to hold a car key. Another gesture forward could switch it to a grip more suited to gripping a steering wheel.

There are dozens of potential modes, all of which can be selected via the smartphone app, and are tailored for everyday uses to help Glanz’s life. He selects four modes that are most useful to him for daily tasks and then has the ability to switch between them instantly.

If he wants to make changes later, it is as simple as grabbing his smartphone.

Glanz says this technology will make it easier than ever for him to use his prosthetic hand.

“It’s just going to make wearing this hand more useful every day,” he said. “It will be easier to use it in everyday environments.”

John Fox, the chief of McGuire’s Prosthetics Lab, said the technology is the best on the market right now and is far more advanced than technology available to most civilians.

Glanz now works as an aerospace engineer. He said he is hopeful his new prosthetic hand will help make life easier and allow him to do his job more efficiently than before.

About the author: Patrick Gordon, is a Public Affairs Specialist at the Richmond VAMC