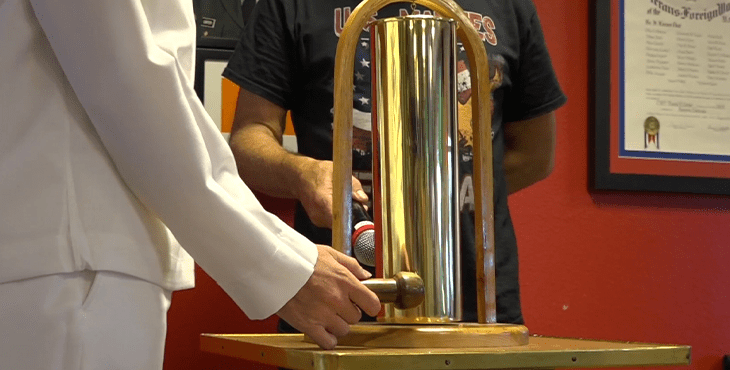 All eyes are on a Veteran in the back of the hall talking about a guy from the old unit.  His buddy had said “I’ll get over this.” But he never did.  Then there was the final step, suicide.

Army, Navy, Air Force and Marines: active duty and Veterans of Vietnam, Iraq, Afghanistan and peacetime stand together.  There’s a brass bell made from a shell casing off of a war ship positioned at center stage.  This is Suicide Awareness Night, and the hall is packed.

VFW Post 3631 in Aurora sits at the crossroads of Colfax and Tower Road outside the city of Denver where the plains of eastern Colorado begin.  Just over a year ago the post’s commander, Gary Anguilm, read in an article that 22 Veterans were dying by suicide every day.  “Being Veterans we decided we wanted to do something about it,” Anguilm said.

And that’s when the idea came to invite the community to come together on the 22nd of every month at the VFW, to learn about Veteran and military suicide and how to help.

Anguilm is a Vietnam Marine Corps Veteran who served two tours in the infantry between 1964 and 1966.  He organizes this event with meticulous attention to detail, starting at 5 p.m. with socializing fueled by burgers, hot dogs and fries – free for all Vets.   It’s a way to honor them, with the added benefit of drawing in a crowd.  At 6 p.m. sharp everything stops, and everyone rises for the Star Spangled Banner.  A Navy officer comes to the stage.  She strikes the bell 22 times in remembrance of each Veteran lost.

The number of Veterans who die by suicide each day changes over time, and right now, that number is down to 20.

“That is fantastic,” said Anguilm,” but we are going to continue this on the 22nd because this is something that people are aware of right now, but our main goal is when it gets down to zero a day.”

This is a goal shared by VA, where suicide prevention is now the top clinical priority, so when a Veteran from VFW 3631 reached out to the Denver VA Hospital looking for an expert to come and talk to them, there were plenty of options. VA has many programs in place across the country, including research centers, dedicated to suicide prevention.  One of these centers, the Rocky Mountain Mental Illness Research, Education and Clinical Centers (MIRECC) for Suicide Prevention, happens to be in Denver.

Dr. Nathaniel Mohatt, a VA research psychologist from the center, is a second time guest speaker at this Suicide Awareness Night. Mohatt speaks openly to the crowd.  They take in the signs and symptoms to look for in friends, loved ones, coworkers and especially fellow Veterans.   Has their behavior recently changed?  Are they depressed, overly agitated, sleepless or hopeless?  Have they suddenly begun giving away cherished possessions?  And finally, are they talking about suicide?

He lays out the steps to help a Veteran in distress, starting with having a conversation.

“Ask directly,” says Mohatt, “are you thinking about killing yourself?”

Contrary to the popular belief that bringing up suicide can put the idea in someone’s head, talking about it is actually a good thing.  Be sympathetic. Listen without judging.  Let that person know that you care, and most importantly, encourage them to get professional treatment, assisting them as best you can.  That could be as simple as making sure they talk to their primary care doctor, if they are not seeing a mental health provider.

During the Q&A, Mohatt addresses the Veteran who had lost his buddy. He wanted to understand how just being upset escalated to suicide.

“One of the things we see is that some people will hide their symptoms from each other or deny it themselves publicly,” he said. “Stigma – this fear of admitting your weakness is a major hurdle to preventing suicides.  So we really want to try to break down this barrier and get people to be willing to be open and vulnerable with each other, because that’s when we start learning about people’s thoughts about suicide and can really help them get care before a crisis.”

Being there, friend to friend, can make all the difference for a Veteran who needs care.

“Your Friends Are Coming Back In,” reads a U.S. Army poster on a wall lined with memories of the cost of freedom.  A WWII helmet, a compass, pictures of war ships, planes and tanks.  Photos taken around the world of our soldiers, sailors and airmen, arms on the shoulders of their buddies.  VFW 3631 has an open invitation out to all, to start their own Suicide Awareness events.

“We started this here,” Anguilm said, “but we want to get it out a lot farther.  So if there’s any other VFW Posts or American Legion Posts, or anybody, that can pick this up to help us get this word out, all we are doing is a good thing”.

By 7 p.m. the sun is disappearing behind the Rockies. Oldies but goodies fill the hall.  People are dancing, laughing and sharing war stories.  The friendships here, old and new, are strong and caring.

If you are a military service member, Veteran or know one in crisis please reach out to the Crisis Line at 1-800-273-8255 and press 1 to speak with a responder who understands the military.  Many of them are Veterans themselves. For more about  VFW3631 visit their Facebook page at @vfwpost3631.

Rachel Warden is communications specialist with the Rocky Mountain MIRECC for Suicide Prevention, a VA research center in Denver, Colorado.  She came to VA from the United Nations and is dedicated to telling the stories of people who face hardship, and the solutions that lift them.