A former POW reflects on the brutality of the Korean War 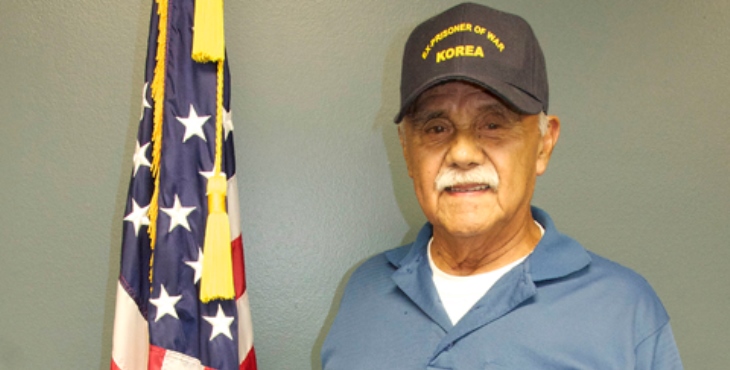 This post first appeared on the Eastern Oklahoma VA Health Care System website. Benito Anguino passed away in August 2017. This article is dedicated to his family.

For Korean War Veteran and former prisoner of war (POW) survivor Benito Anguino, the horror of war and life as a POW is something he wanted to forget.

“I try to forget it,” said Anguino, who lived in Wagoner, Okla. “(But) to put it mildly, there’s no end to it. I thank God I came out alive.”

Growing Up Poor in San Fernando

Anguino was born in 1931 in San Fernando, Calif. and grew up in poverty.

“We didn’t have anything,” he said. “I come from an illiterate family. We were poor. My family couldn’t help me in any way.”

To escape poverty, Anguino decided to enlist in the U.S. Army at the age of 17.

“I always wanted to do something and I never had the chance,” he said. “I sort of got disappointed. I couldn’t go anywhere. I always thought I had the drive to do something like (joining the Army).”

But his mother would have to sign his enlistment papers.

“I told my mom I was going to join and she wouldn’t sign for me,” he said. “I told her I’m going to go one way or another, because I was tired of living that way.”

In August 1948, Anguino joined the peace-time Army and was sent to Japan in 1950, where he served as part of the U.S. military occupation, which didn’t formally end until April 28, 1952.

Four months after arriving in Japan, he was transferred from the 1st Cavalry Division to the 24th Infantry Division, 34th Infantry Regiment.

“They needed reinforcements in the 24th Division,” he said. “I wound up in Sasebo, which was about 90 miles from Korea.”

Still a teenager in 1950, Anguino was promoted to squad leader of a heavy weapons company. Little did he know then, but the lives of his men would soon depend on him.

The 24th Infantry Division was the first combat division deployed to Korea and was tasked with slowing the North Korean advance until other U.S. divisions could arrive.

“When they sent us over there, they called it a police action,” said Anguino. “They told us we’d be back in two weeks. It wasn’t so.”

After arriving in Pusan, 540 American troops nicknamed “Task Force Smith” advanced to Osan. On July 5, the task force engaged the North Koreans in the Battle of Osan, the first engagement of the war involving American troops.

On July 8, Anguino and the 34th Infantry Regiment arrived in Osan as reinforcements.

“At first, there was nothing,” said Anguino. “We didn’t think it was that serious. They marched us over there and a group was coming back.  We saw a group of men they called Task Force Smith. Some of the guys were wounded. We saw that and it looked serious then.”

The soldiers dug in and prepared to face the enemy.

“They came in at full force,” he said. “We fought for a while and eventually they built a perimeter around us. It got bad. We fought our way through hell and high water.”

Outnumbered, the regiment decided to retreat. Anguino and his squad of eight soldiers were ordered to lay down machine gun fire as the regiment withdrew.

“They left us in front to protect their withdraw and then they never came back for us,” said Anguino. “So then, it was up to us to decide what to do. I thank God that all of the decisions that I made worked out for us. I didn’t go the same direction that our regiment went, because they got hit badly in the back. We went the other direction.”

“We went through rice patties,” said Anguino. “We crawled through water. Finally, we got over to the Han River. We were trying to find a way to (escape), but we just couldn’t do it. We found a shack and we went underneath and got some protection.”

The North Koreans hit the soldiers with mortar fire and the soldiers tried to fight back. But they ran out of ammunition.

A newspaper article announcing that Benito Anguino had been taken captive as a POW.

“They started throwing a bunch of stuff on us,” said Anguino. “We fought to the end. We had nine guys and one was hit in the arm. We couldn’t do anything with just bayonets against a full-fledged division. So we voted to give up and take a chance and see if we could maybe get out of there alive.”

The soldiers raised a white t-shirt to surrender.

“They came in and grabbed us,” said Anguino. “They kicked us. They did whatever they wanted with us. Then they took us out, tied us up with telephone wire and kneeled us down along a little stream.”

The North Korean soldiers took a Native American soldier who was wounded and told the men they would give him medical attention.

“He walked off not too far away and then we heard a bang,” he said. “They shot him.”

Then the North Koreans went through the belongings of the remaining eight soldiers.

“They took everything to see what you had,” said Anguino. “If they didn’t like it, they just threw it.”

Aguino had a wallet his brother made for him and pictures of his family.

“This guy looks at my wallet and threw it in the water,” he said. “For some reason, I looked to the side. My wallet, with my mother’s picture on top, was floating. That’s when I got scared. I thought they were going to shoot us. But by God’s grace, He was there for me. All of a sudden, here comes a vehicle with a guy standing up and he stopped them from shooting us. So that is when the prisoner of war life began for us.”

“They marched us on a death march,” said Anguino. “As our troops would come in, they would move us out. We wound up way over there.”

The North Korean troops were commanded by Major Chong Myong Sil, who showed no mercy to the Americans.

When several POWs sat down due to exhaustion, the “Tiger” executed Lt. Cordus Thornton to set an example.

“He got Lt. Thornton out of the ranks and kneeled him down,” said Anguino. “We had to turn around and watch. He shot him right in front of us and told us if we got out of hand, he would do the same thing to us.”

Almost 100 soldiers were killed during the Tiger Death March.

A newspaper photo of Benito Anguino (third from right) in Korea following his release as a POW.

Life in the POW Camps

Anguino was taken to Camp 3 in Changsong, North Korea, which is near the Chinese border. Anguino said the POWs were poorly fed and had no access to medicine.

“If you got real sick, there was no way out because there was no medication,” he said. “The (North Koreans) had nothing to give you.”

In the winter months, the temperature dropped to 20 below zero. Death became routine.

“You would have a guy die next to you and you couldn’t do anything,” he said. “You sleep and deal with them in the morning. Once a week, they would get a burial detail and go look for craters. You couldn’t dig holes because it was so frozen. So they would find craters.”

Facing starvation, Anguino volunteered to carry water so he could steal food from the guard’s kitchen.

“The well was next to their kitchen and I had to take the water to the kitchen,” he said. “I wanted to get something to eat. All I got was burnt rice. They caught me and beat me a little while. They kneeled me down and hit me with a rifle right in the back. A few days later, it was so cold. I don’t know what happened, but I just got numb. I couldn’t walk. I had to crawl through the snow. I thought that was going to be it for me too.”

When others wanted to give up, Anguino did his best to motivate them to push on.

“You had to be strong enough to endure all of that,” he said. “It was very easy to give up. I use to cuss at guys that gave up. You eat whatever they gave us. They wouldn’t eat. They just gave up. They would just lay there and then they’d die.”

After the war ended on July 27, 1953, the North Koreans marched the surviving POWs south to transfer them over to U.S. custody.

“We didn’t know where we were going,” said Anguino. “We were marching and there was this little bridge. All of a sudden, we see the guards staying behind. We were going forward and they were staying behind. Then we saw our (soldiers). As we came close to them, they said welcome home.”

Anguino said he was later told that there were 728 POWs in Camp 3 and only 182 survived.

“Every day when you’re a prisoner of war, you die every day,” he said. “You don’t know what they’re going to do to you. You hate to talk about it. I’m just thankful that I got back.”

About the author:  Nathan Schaeffer is a public affairs specialist for the  Eastern Oklahoma VA Health Care System.