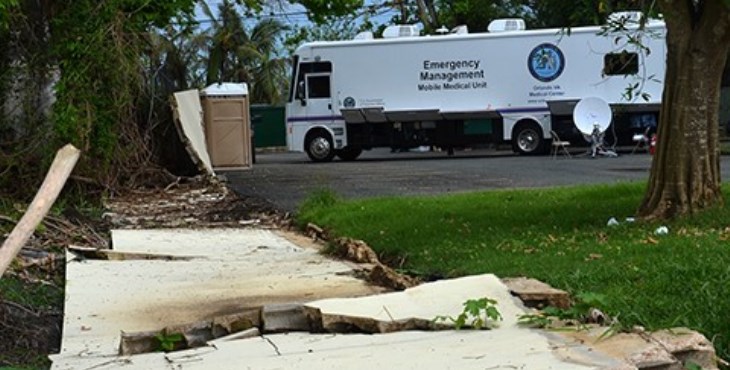 This post first appeared on the Orlando VA Medical Center’s website. For the latest on VA’s response and inspiring stories of service to Veterans impacted by the hurricanes, read more on the blog.

When Dr. Julia Bonilla saw the Arecibo, Puerto Rico, Community Based Outpatient Clinic(CBOC) the morning after Hurricane Maria passed through the island, her first reaction was hopelessness.

Maria barreled through Puerto Rico and the U.S. Virgin Islands Sept. 20, bringing with it sustained winds of 155 mph. Arecibo, a town on the island’s north-central coast, was hard hit by the winds, rain and flooding.

The storm had pushed more than six feet of water into the clinic. When combined with the high winds, the damage was substantial.

Fortunately, Bonilla’s feeling quickly passed, followed by a determination that her Veterans would quickly be able to access VA health care services in their community again. That’s exactly what is happening today, thanks to a mobile medical unit brought in from the Orlando, Florida VA Medical Center.

“When I first saw the clinic the next day, I was sad – it is a new clinic, only one year old,” Bonilla said. “I felt hopeless. I thought, ‘What do we do, where will we work, where will we see our patients?’ Then I got mad, thinking ‘Why did this happen to us?’”

She quickly moved to the next step, knowing the clinic would have to rebuild and reopen somehow. It was too important to area Veterans, some of whom lived in remote areas that would mean a trip of several hours to the main hospital in San Juan to receive even basic services.

“If we had to, we would work under a canvas canopy,” Bonilla said. “We would do it to serve our Veterans.”

Before that could happen, the mobile clinic was shipped by barge from Orlando via the Jacksonville, Florida, port to Puerto Rico. The unit, which resembles a large recreational vehicle, is a self-contained clinic that includes a generator for power, exam rooms, a wheelchair lift and satellite communications, an especially important feature since most of the telecommunication infrastructure on the island was wiped out by the storm.

While the mobile unit doesn’t have all the equipment a fully stocked clinic would have, it has allowed the Arecibo clinic staff to bring basic services back to their Veterans.

“We’re open from 8 a.m. to 1 p.m.,” Bonilla said. “We’re mostly doing prescription refills and renewals, and other minor problems, like colds and small infections. We’re also doing counseling since we have a social worker, psychiatrist and mental health nurse on staff.”

A canvas canopy is the waiting room for Veterans, with cold water available while waiting in the tropical heat. Staff members triage patients under another canopy before referring them to the doctors based on their needs.

The mobile unit is returned to the hospital in San Juan each night for security reasons and driven back to the CBOC parking lot each morning. The operation involves people from the main hospital facility in San Juan as well. Drivers move the unit from the hospital to Arecibo every day. Facilities management staff set up and take the down canopies and chairs. VA police officers provide security for the site and needed medications are delivered from the hospital to the mobile clinic each day.

Bonilla said they are seeing about 60 patients each day. She said her Veterans, who she’s come to know and love in the 19 years she been providing VA care in the area, truly appreciate the efforts the VA is going through for them.

“I’m happy they’re here so I don’t have to go all the way to San Juan,” said Army Veteran Angel Perez, who was waiting to refill his heart medication. “It’s a great thing they’re doing here.”

While the clinic staff is currently working out of the mobile unit, the longer term plan is to set up a mobile hospital tent system that can remain in place 24-7 and allow them to extend their treatment hours until a replacement clinic can be found. For now, though, just being open and available means a lot to both staff and Veterans.

“When we hear (the Veterans’ stories), we know the losses they have suffered,” Bonilla said. “Sometimes they just need someone to hear them. But our patients tell me every day, from the first day, that they feel blessed that we are here.”