Home / Veterans Homelessness / Former business owner found himself without a home, VA was there

Former business owner found himself without a home, VA was there 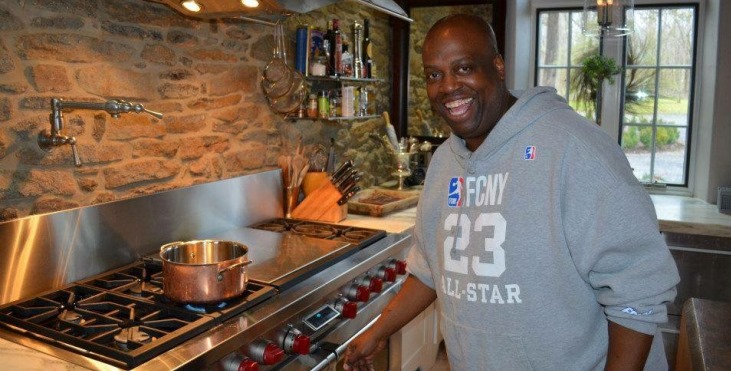 Carl Redding identifies himself as one of the best chefs in America, born and raised in Harlem, New York. He is an entrepreneur, U.S. Marine Corps Veteran, and a soon-to-be published author. But earlier this year, he found himself without a place to call home and in need of VA assistance.

Carl has led an eventful life. When he was only six years old, he began cooking with his mother, developing skills that fueled part- and full-time work in young adulthood. After graduating from high school, Carl served in the Marine Corps for four years. Soon thereafter he was honorably discharged from the Marines and began working in public service for a national civil rights organization.  Nine years later, Carl decided to return to the food industry, this time starting a restaurant of his own.

It was 1999 when Carl opened his restaurant in the Harlem area, but he didn’t stop with just one. Over 10 years, he opened more restaurants in the neighborhood, seeing success with all of them. So he figured he’d expand his business even further — this time all the way to Atlantic City.

Unfortunately, the Atlantic City location did not see the success that the others did. He was forced to close it down. Carl then decided that returning home to New York was not an option for him, because it had become too expensive, so he moved to Philadelphia to start anew. There, Carl worked as an executive chef for colleges in the area. He was getting along fine until he experienced complications related to diabetic neuropathy, a type of nerve damage in the legs and feet that can occur with diabetes.

He knew that VA could help him — VA specialists had been there for him before.

“When I was living in New York, I thought, ‘Why am I going to all of these other hospitals? I’m a Vet. I should go to the VA,’” Carl said. “So I started getting my treatments, my checkups, anything I needed done at the VA hospital, and I became an advocate for VA.”

The complication that initially brought Carl to the Philadelphia VA Medical Center was a sore on his foot that wasn’t healing. The VAMC treated the sore, and Carl continued on. After a few years in Philadelphia, Carl moved to Atlanta, where he relied on VA care more heavily than he had in the past.

Carl had his leg amputated at the Atlanta VA Medical Center in March. The surgery went well, so at the time he thought his complications were over. But once Carl returned home, with a wheelchair, he realized he couldn’t get around in his home because it was not wheelchair accessible. For five hours, he sat in his apartment, unable to move much, until a friend came over to help him to his bedroom. It was then that Carl understood that he needed to return to the Atlanta VA Medical Center for assistance.

Carl now lives comfortably in an accessible apartment just outside of Atlanta. He got the apartment with a housing voucher from HUD-VASH, a joint program of the U.S. Department of Housing and Urban Development and VA. The program combines HUD housing choice vouchers with VA supportive services to help Veterans become and remain stably housed. The wraparound services provided under the HUD-VASH program address Veterans’ unique health, education, vocational, and other needs, and they all contribute significantly to housing stability.

Through everything Carl endured in Atlanta after his surgery and before securing housing, Carl stayed positive — and it’s that strength that pushed him forward.

“When I was in the hospital, I saw people in worse condition than I was,” he said. “If I just lost a leg and these people are dying from cancer … I would just look up into the heavens … people would ask me how I was doing, and I would say, ‘I’m doing great … I’m still alive.’”

These days, Carl is taking classes at The Art Institute of Atlanta, where he is working toward a bachelor’s degree in culinary arts management. He is also set to release a cookbook with a friend in spring 2018.

Carl understands from his experience that homelessness does not discriminate. It can happen at any time, to anyone. But no matter when or if it happens, help is available from VA for Veterans.

The HUD-VASH program in particular served Carl on his journey to permanent housing by offering him a broad range of care that covers multiple disciplines. Each Veteran in HUD-VASH is assigned a care management team that may include  social workers, nurses, recreational therapists, peer specialists, employment experts, and housing specialists. Each team member works with the others to make sure the Veteran’s housing, psychosocial, medical, and mental health needs are addressed in a holistic way.

“Had it not been for this program, I’d be out on the streets somewhere homeless,” Carl said.

Now, thankfully, his future is brighter.

If you or someone you know is a Veteran who is at risk of becoming homeless or is already homeless, please visit your closest VA Medical Center for assistance or contact the National Call Center for Homeless Veterans at (877) 4AID-VET or (877) 424-3838.