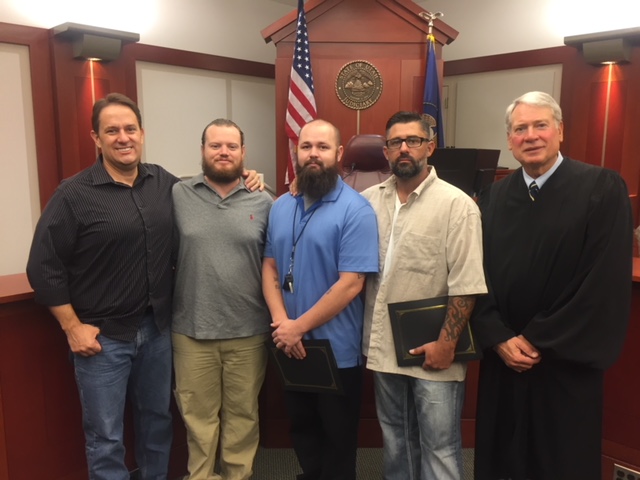 A dad and son embrace; both are sobbing.  Two years earlier they were barely speaking. There is not a dry eye in the courtroom.

“There is no other day quite like graduation day in Veterans Court. This is the pay off.” says Amy Earle, Veterans Justice Outreach Coordinator.

Today four men celebrate freedom and family as they begin a new chapter in their lives.  This new chapter does not include lawyers, judges or jail cells.  All four Veterans have their honor back, and pledge to never go back to the way things were.

Ronald Gurule is a retired Army 1st Sergeant with 21 years of honorable service. The 11 Bravo immediately showed his leadership prowess rising through the ranks quickly. He saw a lot over his long career which includes several difficult deployments to Somalia, Haiti, Bosnia, Kuwait, Afghanistan and Iraq.

In the Army Gurule was the boss, a leader whose primary focus was to always bring his men back.  He did it for over two decades and he did it exceptionally well.  Then it was over.

“I don’t fit. I’m nothing here.” Gurule told the courtroom. “Civilian life was a culture shock.”

Gurule quickly spiraled downward, abusing drugs and alcohol and eventually getting into trouble with the law. He faced a difficult choice: Get clean and complete the Veterans Court Program or go to prison.

At first, he admits to just going through the motions of the program but it wasn’t long before he realized the blessing he had been given.  Gurule could be a leader again.

No Veterans Left Behind

With a Veterans Court coin firmly in the palm of his hand, Gurule addresses the court, his family and his Veteran Court peers.  He’s humbled by the help and support and inspired by new hope for the future. “I am like the old me now on steroids,” he jokes.

“I am a born leader and we are expected to be leaders in the community now.  You all will figure it out too. We need to stick together, stand out and take care of each other.”

Our Veterans Justice Outreach Program works to align Veterans in the criminal justice system with the benefits they have earned.  The hope is that through treatment and support, Veterans can reclaim their lives.

There are currently 34 Veterans participating in 3rd District Veterans Treatment Court.  Since its inception in 2015, the court has had 18 successful graduations.