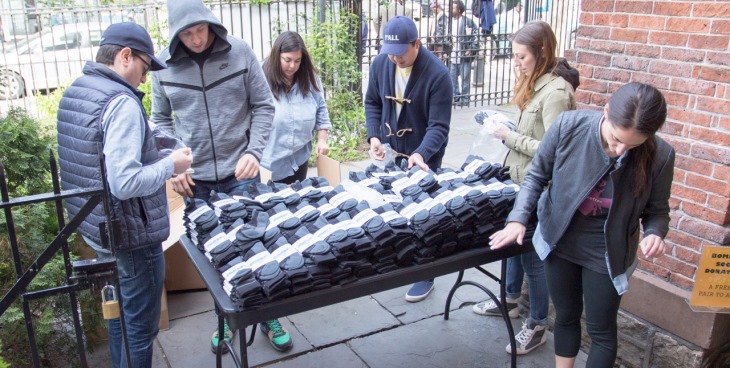 Knitted inside every pair of Bombas socks, there’s a message that reads, “Bee better.” Bombas’ slogan serves as a reminder to the company’s customers that for every purchase they make, another pair of socks is donated to someone in need. Since 2013, Bombas has donated more than 5 million pairs.

In 2016, VA and Bombas partnered to provide homeless Veterans nationwide with socks. The partnership made sense because homeless Veterans tend to move around a lot, often on foot, and at times in the bitter cold — and of all items delivered by homeless shelters, the most requested is a pair of socks.

In the first year of the partnership, Bombas delivered over 700 pairs of socks to the VA New York Harbor Health Care System that were then distributed to homeless Veterans throughout New York City by way of homeless shelters, VA community-based outpatient clinics and VA medical centers. Also, on Veterans Day that same year, VHA senior staff and Bombas employees gave out socks to 225 Veterans at the Borden Avenue Veterans Residence in Long Island City, New York.

This year, Bombas has continued to provide socks to homeless Veterans in New York, growing its list of donation locations that cater specifically to Veterans. One such location is the Outpatient Mental Health Clubhouse in New York City.

Dave Heath, the CEO and co-founder of Bombas, looks forward to seeing the partnership continue to grow.

“We initially started Bombas to make an impact and help support those in need, after learning that socks are the most requested clothing item at shelters. We are honored to continue our partnership with the VA to ensure that every homeless Veteran receives a clean pair of socks each year, in an effort to make their transition out of homelessness more comfortable,” Heath said.

Partnerships like this one are important because they allow VA to reach more Veterans with services and supplies through groups that are already serving Veterans well. As we move into 2018, I look forward to seeing where this and other partnerships take us as we work to accomplish our ultimate goal of ending Veteran homelessness across the nation.

Emily Kalb is the Health Care for Homeless Veterans Program coordinator at VA New York’s Harbor Health Care System. Before working as the program coordinator in 2014, she worked as the coordinator for Project TORCH (The Outreach and Rehabilitation Center for Homeless Veterans)—a drop in center for homeless veterans to connect with Veterans Health Administration, Veterans Benefits Administration and other supportive services to help Veterans return to an independent, productive lifestyle. She holds a master’s degree in social work and has certifications in organizational development, adult psychotherapy and motivational interviewing.