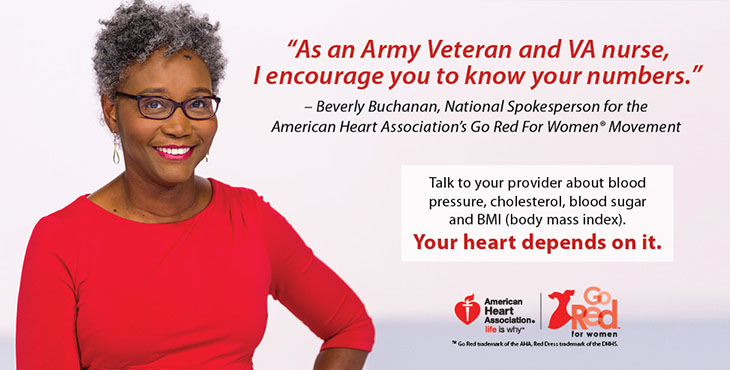 It took the threat of dealing with a medical emergency overseas for Beverly Buchanan to push doctors for an explanation to what was causing the symptoms she’d been experiencing for more than two months. It turned out to be a major blockage in her main coronary artery, and would require open-heart bypass surgery.

As a nurse who teaches cardiac classes for hospital staff and patients at Dorn Veteran’s Affairs Medical Center in Columbia, South Carolina, Beverly knew she had increased risks for heart disease. Her dad struggled with plaque in his arteries before dying from a heart attack at 58.

“As a nurse and a survivor, I encourage you to know your numbers.”

She also had risks that she could control through lifestyle. After being diagnosed with hypertension in her early 40s and struggling with medication, she reduced the amount of medication needed to control her blood pressure through weight loss.

Beverly’s cholesterol had been high starting in her 20s, but was always outweighed by higher levels of high-density lipoprotein (HDL), or “good” cholesterol. By age 54, that ratio had flipped and her doctor recommended medication to help control it. Beverly rejected the idea, hoping she could get her cholesterol numbers down through diet and exercise.

During a routine checkup in 2010, Beverly’s doctor asked if she ever had chest pain. She said yes, but had assumed it was stress. The doctor ordered a full cardiac work-up, and the results came back normal.

But starting in March 2012, Beverly, then 54, began to have episodes where she’d suddenly feel like she was about to pass out. After a particularly bad episode while she was at work, she went to the cardiac department and had them do an EKG. Again, everything came back normal, although the symptoms continued to recur.

She eventually consulted with her cardiologist and was given a Holter monitor to identify electrical problems with her heart. A couple weeks after the monitor was in place, Beverly was awakened by a sharp pain in her chest.

“I felt like I was going to die it was so intense,” she said.

Beverly checked with the company monitoring the Holter’s data, but no heart events were recorded. She then talked with a fellow nurse, who urged her to go to the hospital anyway. By then, Beverly felt better, and decided not to go to the hospital and would follow up with her doctor later. Without consulting with her doctor, she discontinued using the Holter monitor halfway through the 30-day plan after discovering the latex leads were irritating her skin.

“Looking back, I should have gotten it checked out right away and talked to my doctor about getting a non-latex option so I could keep wearing it,” she said.

Beverly planned to travel overseas to visit her daughter, and didn’t want to risk being hospitalized. So she decided to push for more answers. Her doctor ordered a repeat of the cardiac testing she’d done in 2010, but this time testing revealed something was wrong.

After initially balking at undergoing cardiac catheterization, Beverly’s doctor told her he would be ordering bed rest.

“That’s when I realized how serious it was,” she said.

A catheterization procedure the next day revealed a major blockage in her left anterior descending artery — sometimes called the “widow maker” because the survival rate from a heart attack is so low.

Beverly underwent open-heart bypass surgery and cardiac rehab, constantly pushing herself to make progress. She ended up taking her overseas trip, although the pain and fatigue she experienced made her regret not heeding the doctor’s advice to postpone.

Although Beverly was in good physical shape prior to her bypass, the mental toll of what had happened weighed heavy, especially as she struggled with the uncertainty of returning to work.

“My son was 12 at the time, and I was terrified about how I would support us,” she said. “Doctors and nurses are good about telling patients about the physical part, but we’re not as good about the other stuff, like side effects from medication or the emotional part of recovery.”

Beverly returned to work, but had to make changes, particularly about slowing down, taking pain medication and asking for help. In some cases, she worked with colleagues to avoid the heavy lifting required as a nurse.

“I knew if I tried to do too much I would hurt myself,” she said.

She now shares her story in her classes to encourage her colleagues and patients to know their numbers, take symptoms seriously and trust their medical providers.

“I stress that it is important to Know Your Numbers, and have conversations with your healthcare providers,” she said. “I was trying to be in control, but you can’t fix everything yourself. I still advocate for myself, but I’m quicker to follow my doctor’s advice and accept that he knows what he’s talking about.”

Beverly Buchanan served as captain in the U.S. Army in 1982-92, and as major in the Army Reserves in 1992-2001, earning numerous commendations and medals. She is an educator in the Wm. Jennings Bryan Dorn Heart & Vascular Department, Department of Veterans Affairs Medical Center, in Columbia, South Carolina.