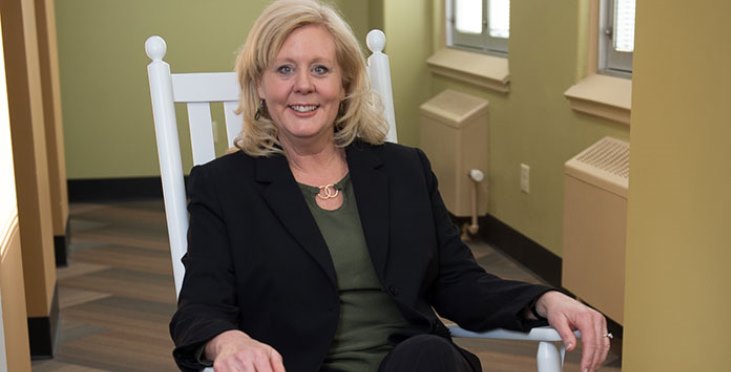 Who says therapy has to be complicated? Perhaps an effective tool for treatment and recovery could be something as simple as, say … a rocking chair.

Just ask a Marine Veteran who participated in a rocking chair study through the Robley Rex VA Medical Center in Louisville, Kentucky. At the time, he was in recovery from a serious addiction to alcohol and drugs, including recreational and pain-killing substances. “If it was a pill, I was popping it,” he says.

Plus, he had been homeless for about a year, “bouncing around from home to home, couch to couch,” as he put it.

The former Marine, now in his 30s, has since resurrected his life, in part because of a rocking chair. He credits his use of the chair with helping him control his urge to drink and consume drugs. During the course of the study, he’d spend at least a half hour rocking back and forth several times a day. He rocked mostly in a dark, quiet room.

“The chair helped me control my thinking and emotions,” he says. “I’d be able to set my mind free and do away with addictive urges. It helped me to train myself that when I do get those thoughts, I can just meditate and let those problems go. I’ve always been athletic,, so the chair kind of reminded me a little that whenever I get on the field or on the court, all my troubles go away. I’m focused on one thing at a time. That’s what the rocking chair did for me.”

The former Marine was one of 19 Veterans who took part in the Louisville VA study, which was designed to test the therapeutic benefit of rocking chairs on homeless Vets in treatment for substance abuse problems, mainly alcohol addiction. Researchers hypothesized that if the participants could control mood and substance cravings, their likelihood of remaining in the treatment facility would increase, thus reducing their risk of chronic homelessness.

Researchers at the Louisville VA and at the University of Alabama collaborated on the study, which was published in the Journal of the American Psychiatric Nurses Association in December 2017.

The researchers concluded that “vestibular stimulation by rocking in a rocking chair may increase the ability to self-regulate mood and substance cravings, thereby potentially reducing risk of relapse and recurrent chronic homelessness.” The vestibular system is an area of the brain associated with mood and emotion.

Dr. Rene’ Cross, a nurse practitioner at the Louisville VA, served as the lead researcher.

“Veterans described the rocking as calming their racing thoughts, giving them peace of mind, relieving stress, relaxing, helping them stay focused, decreasing depression,” Cross says. “When a person finds themselves thinking of their substance of addiction cravings, it can lead to relapse. Being able to self-soothe by rocking in a rocking chair assisted in reducing those thoughts and thus temptations to relapse.”

Cross, an Air Force Veteran and a former Navy reservist, conceived of the idea for the pilot study. She serves former service members through the Health Care for Homeless Veterans program at the Louisville VA., and has seen some of them relapse on alcohol or drugs after coming through the program.

“When some of these Veterans circled back through my office, I asked them what they felt contributed to their relapse,” she says. “I nearly always got an answer that cravings for their substances made it difficult for them to calm down. This made them feel anxious, and they left the facility to go drink alcohol or use drugs.”

Read the rest of the story with more details about the study at VA Research Currents.

About the author:  Mike Richman is a writer and editor for VA Research Communications.