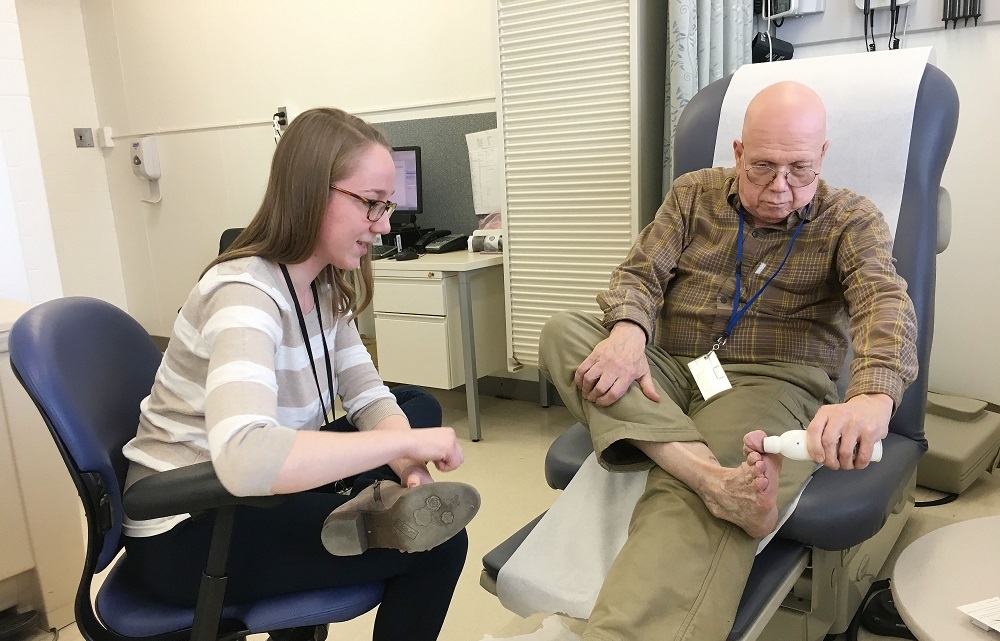 Researchers at the VA New York Harbor Healthcare System are making steady progress on a four-year, $1.1 million award from the VA Rehabilitation Research and Development Service to find a way to prevent the recurrence of diabetic foot ulcers in Veterans who had a previous foot ulcer that healed. The project, known as “STEP UP to Avert Amputation in Diabetes,” is now in its third year.

STEP UP stands for Self-monitoring, Thermometry and Educating Patients on Ulcer Prevention. The study is encouraging patients to take charge of their own preventive care. The program aims to motivate them to adhere to recommended self-care practices and to monitor the temperature of the soles of their feet using a special foot thermometer. The team is testing the approach in a randomized clinical trial. To date, nearly 160 patients have been recruited. The team hopes to reach its goal of 238 participants by October 2018.

“I used [the thermometer] every morning for 18 months,” said Vietnam Veteran Joseph Hammerschmitt, who recently completed his participation in the study.” It was very simple. I sat myself on the bed and did one foot and then the other. It was good. I didn’t wind up with any foot problems.”

In accordance with STEP UP guidelines, Hammerschmitt has also been washing his feet every day and using a mirror to check that his feet are clear of blisters, ulcers or other lesions. Importantly, he continues these preventive activities even today. He even monitors his physical activity using the study pedometer, which he still carries around with him.

Some 25 percent of VA patients nationwide have diabetes. According to lead researcher Sundar Natarajan, M.D., M.Sc., more than 80 percent of the non-traumatic amputations in VA are caused by the complications of diabetic foot ulcers. “This is a huge problem,” he says.

Many Veterans with diabetes have neuropathy related to their illness. Natarajan explains that neuropathy causes patients to lose feeling in their toes or other parts of their feet. It also leads to poor circulation. Along with that, diabetes causes slower healing and a greater chance of infections. Therefore, minor injuries can lead to skin breakdown, ulcer formation, and subsequent infection, without the patient’s noticing until the problem becomes serious. Once the infection has spread, the foot or part of the foot may have to be amputated.

That outcome is especially hard on older patients, who often have other complications of diabetes such as kidney or heart disease. Because of this, VA has created special foot clinics and provides supplies to encourage better self-care, such as mirrors for Veterans to examine their feet, and cushioned shoe inserts or special shoes to minimize pressure on foot areas at risk.

However, the biggest challenge is to get patients to follow self-care practices that are shown to reduce the risk of recurrent diabetic foot ulcers.

Natarajan says “the first part [of the program] is getting people to take better care of their feet. The second part involves monitoring pre-ulcer foot health with a foot thermometer. These [steps] are in the context of typical diabetes care such as eating healthy, staying physically active, and taking medications as prescribed.” The team incorporates behavioral science methods to motivate patients.

The fact that neuropathic areas at risk for ulceration are associated with increased skin temperature was first noted in leprosy patients. The application of this idea in people with diabetes was pioneered by podiatry researcher Dr. David Armstrong, formerly with VA in Chicago.

“We are building on their work to develop and test a stronger intervention and more of a home-based program,” says Natarajan. He notes that Armstrong is a collaborator on the current project.

The thermometer used in Armstrong’s earlier work is no longer available, says Natarajan. His team is now using a special infrared thermometer—the DermaTemp, made by Exergen—that he says is “cheaper and more durable.”

Based on early feedback from some Veteran participants in the research, the study team worked with Exergen to develop a long-handled thermometer for those who have physical problems—such as back or knee pain—that make it hard for them to reach the bottom of their feet with the standard thermometer.

Patients hold the thermometer probe at six different parts of the sole and record the temperatures. Natarajan says that if a patient has healthy feet, both feet will generate approximately the same temperature levels. However, when an ulcer is about to form, the temperature of that area on the affected foot may be higher, due to inflammation.

If there is a discrepancy between the two feet, the research counselors are consulted. In most situations, having patients rest for 24 hours and elevate the affected foot brings the temperature down to normal. If not, the patient is referred to a foot specialist for follow-up care. That typically involves ruling out non-ulcerative conditions, and providing special shoes that alleviate pressure.

Natarajan says foot thermometry is a promising way to help patients detect and stop ulcers before they develop, but the challenge is getting patients to self-monitor their foot temperatures daily. To that end, STEP UP is testing a new phone-counseling approach designed to motivate patients to self-monitor their foot temperatures and take better care of their feet overall. Natarajan says he hopes this will “lead to a new strategy to prevent the devastating complications of foot ulcers.”

About the authors: Claudie Benjamin is the Public Affairs Officer at the VA New York Harbor Healthcare System. Mitch Mirkin is the senior writer and editor with the VA Office of Research and Development. This blog post is an update of an article originally posted at www.facebook.com/notes/va-ny-harbor-healthcare-system/prevention-better-than-cure-the-step-up-to-avert-amputation-in-diabetes-program/1695686173778756.