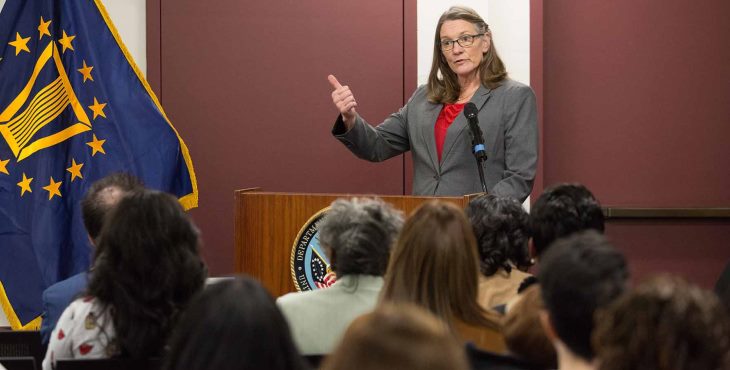 Retired crew chief, load master and civil service technician Judi Roberts is one of 10 women profiled in VA’s Women Veteran Athletes Initiative to help celebrate Women’s History Month. In a recent visit to VA headquarters, she shared her story of how sports helped her find success on and off the court.

Roberts was raised in the 1960s on a farm near Elmwood, Nebraska. More interested in shop class than home economics, Roberts enjoyed being a little unconventional. Sports were an integral part of life. A four sport athlete in high school, Roberts would go on to play volleyball at the University of Nebraska-Lincoln as a first stringer for junior varsity and first hitter off the bench for varsity.

Roberts believes the value of sports extends beyond the physical benefits and fun. She credits sports with helping prepare her for a career in the male-dominated aircraft maintenance and aircrew career fields.

“Skills learned through sports, like independence, team work, and competitiveness can be transferred to other parts of our lives,” said Roberts. “The competitiveness that is needed to work in a traditional man’s job is found within. It doesn’t come from outside; it was developed by training with coaches and other athletes over time.”

She admits it wasn’t always easy being the only woman or leading a team, but her experience in co-ed sports may have helped her to build a rapport with co-workers. She ultimately won their respect by doing her job well. Although she never set out to break any gender barriers, she is extremely proud of the work she accomplished and pleased to have played by her own rules.

Despite a persistent shoulder injury and two knee replacements as a result of her military service, Roberts remains physically active in retirement. She was recruited by the recreational therapist at Martinsburg VA medical center in West Virginia to represent the facility at the 2017 National Veterans Golden Age Games, where she swam and speed walked competitively and won the gold medal in discus.

The National Veterans Golden Age Games are part of VA’s comprehensive recreation and rehabilitation therapy programs that encourage the importance of physical activity, health and recovery to improve overall quality of life for Veterans. The competition is open to Veterans who receive their health care at a VA medical facility and are 55 years of age and older.

This year’s games are scheduled for Aug. 3-8 in Albuquerque, New Mexico, where Roberts will compete once again in the swimming, speed walking and discus throw competitions. Interested Veterans ages 55 and older who are eligible for VA health care benefits may complete an application to participate in the games online from April 2 through May 2 at www.veteransgoldenagegames.va.gov.

Judi Roberts is one of 10 athletes selected for the Women Veteran Athletes Initiative. The participants represent all branches of the armed services, and were selected by VA and its partners — the Veterans Canteen Service, Team Red, White & Blue, the Semper Fi Fund and Comcast. Visit the Center for Women Veterans website to see photos of each athlete by Veterans Portrait Project photographer Stacy Pearsall. Find more on social media at @deptvetaffairs (Twitter, Instagram) and @VAWomenVets (Twitter, Facebook) and by following #WomenVetAthletes.