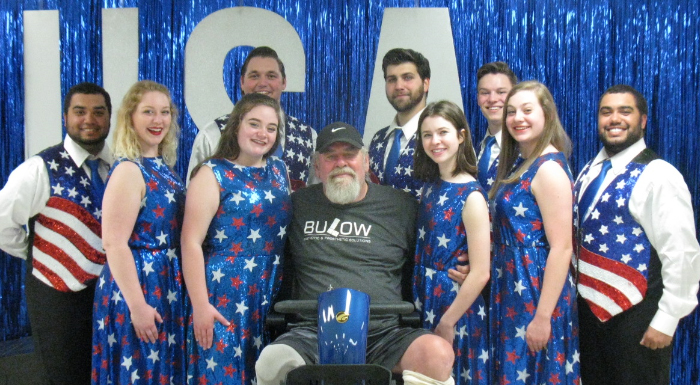 When the Re-Creation traveling dance and song team (pictured above) arrived at the VA Tennessee Valley Healthcare System (TVHS), community living center resident Stan Webb settled in to enjoy the performance. He had no idea he’d be part of the show.

The group delivered an hour-long, high-energy performance for TVHS residents and visitors. The show featured bright costumes, intricate choreography, and some of the best in American music.

That’s where Stan Webb comes in.

When the group performed “I’m From The Country,” Webb (pictured above with the group), took notice. It’s a song Tracy Byrd recorded and released as the first single and title track from his fifth album, and a song that rose to number three on the U.S. Hot Country Songs chart in 1998.

Webb sat in the audience as the group began to perform the song without knowing one of its composers was in the audience. He said he was surprised to hear it – and he loved it.

“I was tickled!” Webb said.  “It was great to hear my song. Of all the country songs that they had to pick from, it was great.”

Webb, a professional songwriter, said he wrote “I’m From The Country” because he wanted to create a song that everybody from the country would be proud of, something representing them — hardworking people, proud of who they are.

But on this day, many years later, the song made him the star of the show.

“He was smiling ear to ear,” said TVHS Karla Mages, recreation therapist. “He’s always happy to share his talent. He’s a tender-hearted person who really enjoys the fellowship of his peers.”

Webb still writes songs, composing every day in his home in the TVHS Community Living Center.

“It’s great here,” he said. “Everybody takes care of me. There’s freedom here and a great patio area for fellowship.”

And, at least for Webb, there are sometimes free performances where top-notch entertainers sing songs you wrote.