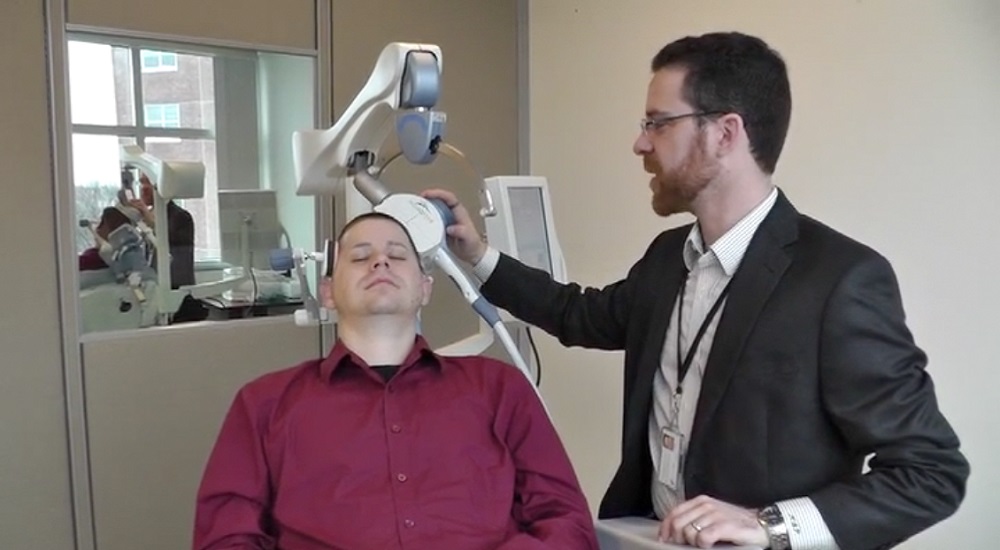 Posttraumatic stress disorder (PTSD) represents a significant health concern for millions of Veterans and their families and friends. The number of U.S. Veterans diagnosed with PTSD varies by service era.

As part of its mission to promote new treatment options for Veterans, the VA Center for Compassionate Care Innovation (CCI) supported the expanded use of Transcranial Magnetic Stimulation (TMS) treatment at the Providence VA Medical Center in Rhode Island. As seen pictured above Dr. Noah Philip, Director of Psychiatric Neuromodulation at Providence VA, treats a patient using TMS therapy.

TMS treatments are approved by the U.S. Food and Drug Administration to treat depression. An electromagnet, essentially a wire wrapped around a solid coil, is charged with electricity and then placed over specific points on the skull.  This creates a very powerful magnetic field that can positively affect brain cells. While TMS is typically used to treat depression, there is growing evidence that it can help Veterans with PTSD.

Noninvasive, no surgery or sedation

A major advantage of TMS therapy is that it is a noninvasive procedure and it does not involve surgery or sedation of any kind. Noah Philip, M.D., director of psychiatric neuromodulation at the Providence VA Medical Center, has been involved with the TMS treatments since they were first offered. He says that with the help of CCI, they were able to purchase a critical new component for the stimulator last year which allows them to reduce the time needed for treatments and gives them the ability to see more patients.

Transcranial Magnetic Stimulation is a therapy being used for treatment of PTSD, typically used to treat depression…

Numerous studies have stated that the positive effects of TMS can last well after the usual treatment phase of a few weeks. Side effects are generally minor and include: headache, tingling and lightheadedness immediately after treatment.

“We can now deliver faster stimulation treatments and we are really happy with that,” Dr. Philip said.  “Another real improvement is that the equipment is now much quieter, which can reduce the anxiety level of Veterans who are bothered by loud noises and increase their comfort level during the treatment.”

Since 2013, 150 patients have received TMS therapy at the medical center in Providence, and Dr. Philip is usually asked to evaluate new patients every week, including Veterans seeking treatment for PTSD. Dr. Philip attributes the increased interest in the therapy over the past year to communications outreach from the VA and through word-of-mouth conversations among Veterans.

“A Veteran will do the treatment, experience the positive results, and then they share how it has helped them with other Veterans,” Dr. Philip said. “We are also receiving requests from other VA facilities within the VISN who do not have their own TMS equipment.”

Ben Kennard is a VA technician and 20-year Veteran of the U.S. Army, who has been directly involved with the TMS treatments.

“With the majority of the Veterans I have seen, TMS really works,” Kennard said. “Anybody that is suffering from depression should at least give it a try and see how it works for them. It gives us another treatment option, especially for those Veterans who have issues with taking medications.”

Kennard said that as a Veteran helping other Veterans, their shared experience can help reduce the anxiety some may feel starting an unfamiliar treatment. He said one patient from last year sticks in his memory because Kennard could tell he was very anxious about beginning the treatments.

“Initially he kept making jokes all the time, and I think that was the anxiety showing through,” Kennard said. “After several treatments his demeanor completely changed and he was still joking, but it was because he was much happier.”

Dr. Philip and colleagues continue to work on ways to improve their operations to meet the demand for PTSD treatments.

“My hope is that we will be able to provide treatments that last 10 minutes, down from the 45 minutes it usually takes,” he said. “It might even give us the capability to have an ‘open-door’ clinic, which would enable us to help many more Veterans who have busy work and life schedules. It is great to have an effective non-medication treatment to help Veterans, and I think we can do even better.”

CCI is an entry point for safe and ethical innovations that may be successful in treating a subset of Veterans diagnosed with certain health conditions that have not responded to evidence-based therapies. CCI looks for new treatments or novel approaches to existing therapies that may improve Veterans’ health and well-being and, if effective, be adopted by VA.

Information on the treatment of PTSD at the VA.

Author: Tracy Weistreich is the Deputy Director, Office of Community Engagement/Center for Compassionate Care Innovation. Dr. Weistreich holds a PhD in Health Sciences, a Master’s Degree in Nursing Education, and Associate and Baccalaureate Degrees in Nursing.  She is a US Army Nurse Veteran. She joined the Office of Community Engagement in May 2016 and helped establish the Center for Compassionate Care Innovation.