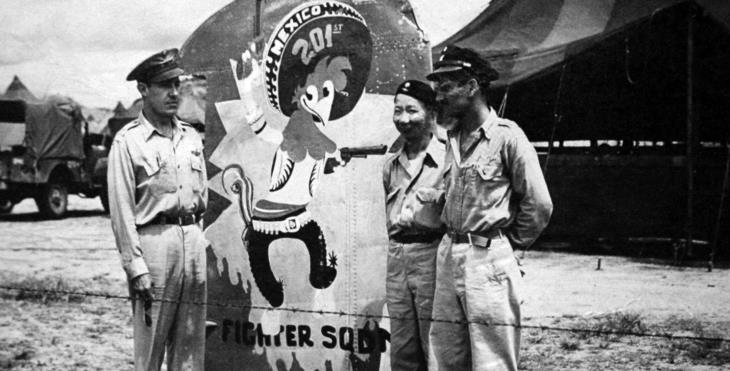 I have two passions in my life; flying and military history (ok three, serving my fellow Veterans). I fell in love with flying as a kid on my first commercial flight from Chicago to Jackson, Mississippi, and with military history while on a middle school field trip to the Vicksburg National Military Park.

More recently, I happened to catch the end of a program on TV that highlighted the World War II service record of Squadron 201. I had to learn more.

It is a little known fact the Mexico Air Force fought alongside the United States Army Air Force in the South Pacific during World War II.  Mexico accepted a U.S. invitation to provide Mexican Air Force units in the war against Japan shortly after the Japanese attack on Pearl Harbor.  The squadron was known by the nickname Águilas Aztecas or “Aztec Eagles”.

Consisting of 33 pilots and more than 270 support personnel, the squadron left Mexico for initial training at Randolph Field in San Antonio and Majors Field in Greenville, Texas, where they received months of advanced training in combat air tactics, formation flying and gunnery.

The squadron was attached to the 58th Fighter Group of the U.S. Army Air Forces during the liberation of the main Philippine island of Luzon in the summer of 1945. The Aztec Eagle pilots flew Republic P-47D-30-RA Thunderbolt single-seat fighter aircraft carrying out tactical air support missions.

During its operational history the squadron flew 795 combat sorties, accumulated nearly 2,000 hours of combat flying and sadly lost seven pilots. The Squadron 201 remains the only military unit in the history of Mexico to engage in combat outside of its national borders.

The Aztec Eagles outstanding service record and sacrifices was recognized by Gen. Douglas MacArthur, supreme commander of Allied Forces in the Southwest Pacific Area. In addition, the squadron was awarded the Philippine Legion of Honor, with a rank of Legionnaire, by then Filipino President Gloria Macapagal-Arroyo in 2004. The squadron reaminas active today.

About the author: Dwayne E. Campbell joined VA’s Center for Minority Veterans as a program analyst in November 2009. He serves as the center’s Veteran liaison for the Hispanic American Veterans’ community. Campbell served on active duty in the United States Army for nine years and is a Desert Storm Veteran.