PGA Hope puts Veterans in the swing of things 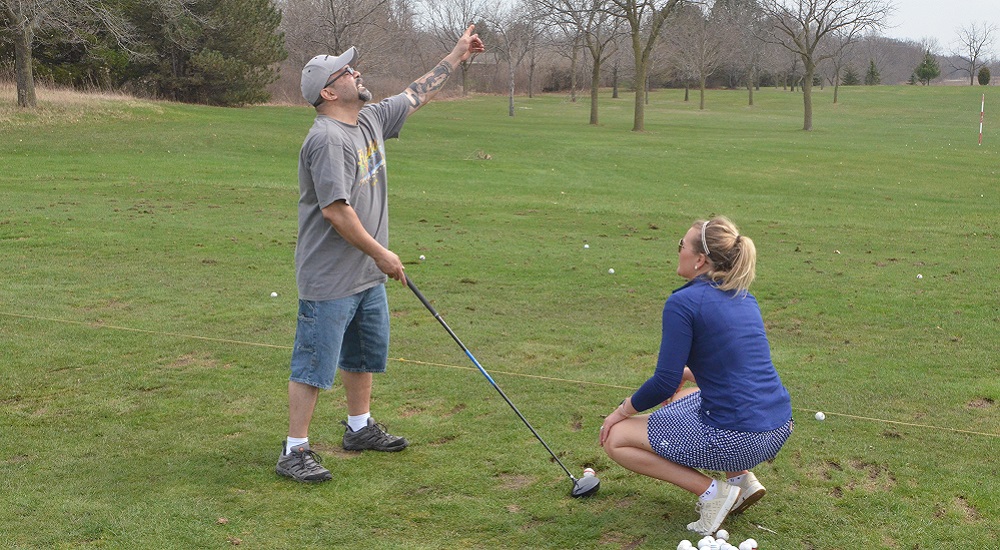 Pete Mittelstaedt lines up his wheels to line up his putt. Ray Martinez (pictured above) is hoping his softball-like swing magically corrects itself. Carissa DiPietro just wants to improve at a sport that is helping her get better.

The three are among almost four dozen Veterans who spend Monday afternoons at Oakwood Park Golf Course in suburban Milwaukee as part of PGA Hope, a six-week program that provides Veterans with instruction, course access and adaptive equipment, if needed.

PGA HOPE — Helping Our Patriots Everywhere — is the flagship military program of PGA REACH, the charitable foundation of the PGA (Professional Golfers’ Association) of America. The program helps Veterans with disabilities enhance their physical, mental, social and emotional well-being through golf.

The Milwaukee program is in its third year. This year, about 50 Veterans are participating, up from 30 last year, said Chet Hendrickson, golf services manager for Milwaukee County Parks.

“There’s kind of a sample prosthetic, so we learned how to swing as if we were wearing a prosthetic,” Hendrickson said. “Also, what to say around Veterans and maybe what not to say.”

At each session, half the group begins with putting instruction, while the other half heads to the driving range. Afterward, the Veterans can play the course.

Pete Mittelstaedt golfs with the aid of a Paramobile, a specially designed cart maintained by the Stand Up and Play Foundation.

Mittelstaedt, who served in the Marine Corps from 1963 to 1968, has been in a wheelchair for 12 years. He golfs with the aid of a Paramobile, a specially designed cart maintained by the Stand Up and Play Foundation. The cart raises a golfer from a sitting to a standing position, enabling him or her to take a natural golf swing. It also can be used on the green.

“I love it,” Mittelstaedet said. “Before all this happened, well, I wouldn’t call it golfing, but I was out there hitting the ball.

“The biggest problem is I can’t get enough on the ball,” Mittelstaedt said. “You always want to kill it and drive it a million miles.”

Mittelstaedt, 75, who also hunts, competes in a variety of golf tournaments, such as the week-long National Disabled Veterans TEE Tournament in Iowa City, Iowa.

“At the TEE tournament last year, you play best ball and a number of them were my drives,” said Mittelsteadt, who has traded distance for accuracy. “The other guys were killing it and winding up in the woods or the creek. Mine’s on the fairway. It’s not going a million miles, but you’ve got to use my ball because it’s playable.”

Martinez jokes about his multi-sport swing, but is serious about the impact of the PGA Hope program.

Under the watchful eye of an instructor, Martinez addresses the driving-range golf ball, slowly draws his club back like a pro in a how-to video — and then unleashes a wicked full-throttle swing better suited for his next softball game.

The Army National Guard Veteran punctuates the slice-producing effort with a laugh and then gratefully accepts the next round of coaching.

“I loved it last year,” said Martinez, in his second year with the program. “One of my favorite lessons was the sand trap lesson … because, like in baseball, you choke up on your bat, you choke up on that club and you open it and you push the sand and it’s the sand that lofts the ball up in the air and out of the bunker.

“I love golf. It’s against myself. I’m only trying to do better,” said Army Veteran Carissa DiPietro.

DiPietro, an Army Veteran, is the lone female in the program this year. She talks openly about her struggles since the death of her 5-year-old daughter in 2001.

“Four years ago, I wasn’t getting out of bed,” DiPietro said. “My depression hit an all-time high. And I never thought I’d live to 40 and I turned 40 last year. This month is my 41st birthday. Whatever gets me out of bed and keeps me alive.”

Golf provides a therapeutic outlet, DiPietro said and she was extremely excited about immediate improvement, which she credited to Erika Pirkl, player development coordinator for the Wisconsin PGA and a volunteer instructor.

“Just the swing alone,” DiPietro said. “That’s what was keeping me so inconsistent. Just her teaching me the swing and the movement and that it’s similar to the sports I used to play — softball and volleyball.

“I love golf. It’s against myself. I’m only trying to do better,” she said. “This is really relaxing for me because my husband’s a lot better than I am and I’m very inconsistent. That’s why I want to do this.”

Mittelstaedt missed the first week of this year’s sessions because of a volunteer commitment. He often helps college students learn what it’s like to use a wheelchair and also volunteers at the Milwaukee VA.

“There have been people who have done so much for me,” he said. “I can go out and play anytime. It’s better to give once in a while.”

Jim Hoehn is a public affairs specialist at the Milwaukee VA Medical Center.