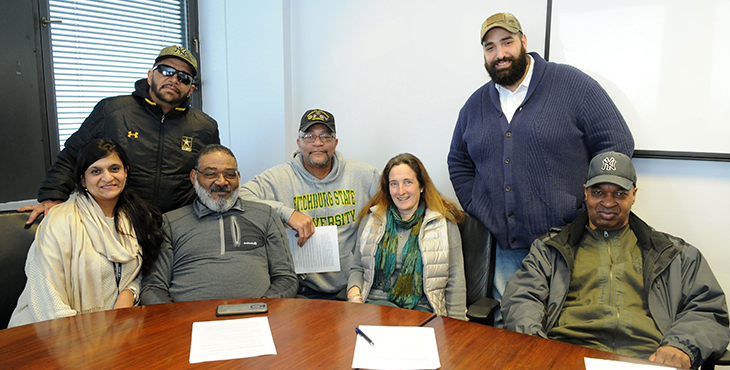 Above: Jesse Brown (center) and Chris Murray (second from right) are part of a suicide-prevention group led by Drs. Marianne Goodman (third from right) and Kalpana Nidhi Kapil-Pair (left) at the Bronx VA Medical Center. (Photo by Yang Zhao)

When Jesse Brown thinks back on his life, there’s a sharp dividing line around that grim day in September 2001 when terror struck the U.S.

Brown, then with the New York Army National Guard’s 145th Maintenance Company out of Staten Island, took part in search and rescue at ground zero. He took in nightmarish scenes of victims in the rubble.

Then came his deployments to Iraq, three in all.

“Two of my guys getting killed. Hearing voices in your sleep. Going through the PTSD, the anger.”

Brown, now 58, received an honorable discharge in 2012, after 32 years of service, with deep wounds no one could see. The storm raging inside was more than he could bear. He eventually tried to take his own life.

“I’ve been going through a lot of trials and tribulations. I was on a suicide ward.”

That’s when things began to turn around, just enough to give him some hope.

“They came and saved me. It’s been excellent.”

The “they” he refers to is Dr. Marianne Goodman and her team. Goodman is a psychiatrist and researcher who’s co-leading a suite of suicide-prevention projects at the James J. Peters VA Medical Center in the Bronx, New York. The work is part of the Mental Illness Research, Education and Clinical Center at the site.

One study is Project Life Force. The idea is to bring together a cadre of Vets who all have a recent history of suicidal thinking and a completed suicide plan, provide them with group psychotherapy and have them revise their safety plans as they incorporate the new skills they are learning.

While group sessions for those with issues like PTSD or anger are commonplace at VA hospitals, clinics and Vet Centers, Goodman’s crew is doing relatively pioneering work by running a group for suicidal Veterans.