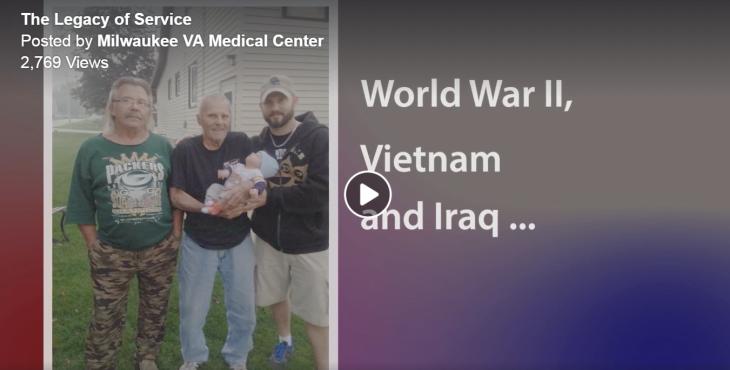 Editor’s note: Clicking the image above takes you directly to the video on the Milwaukee VA Medical Center’s Facebook page.

It was a story that almost didn’t happen.

But it had to be told, anyway.

When Paul Marifke, an Iraq Veteran and housekeeping supervisor at the Milwaukee VA Medical Center, first told us about his family’s military heritage, we knew we wanted to tell the story right.

We planned to interview all three. But before that could happen, Jerry passed away at age 94.

“When we first talked about this, I thought this would be a great thing to share, and get down our history for our family. But after we lost my grandpa, I didn’t think it would happen,” Paul Marifke said.

If Jerry Marifke couldn’t be here to tell his story, maybe – just maybe – in a small way, the Milwaukee VA Medical Center could honor him by helping tell his story for the world.

The Milwaukee VA Medical Center still interviewed Paul and his dad, Dennis. But the focal point of the story, is how it all started with Jerry and his service, as told by his family and his personal anecdotes. In doing so – telling part of Jerry’s story after he died – we learned something we may not have known if the video happened the way we originally planned. Unbeknownst to Paul and his dad, Jerry was a Battle of the Bulge survivor.

“For us, to be able to do this and to see this video, it’s just a huge honor,” Paul Marifke said. “It’s kind of neat. It’s something I can share with my son and daughter, and the rest of our family. We have a lot of military history. My cousin is in the military. My dad, my stepdad, my uncle … there’s a lot of service to our country.

Paul and his family learned more about his grandfather’s service in the Battle of the Bulge when a friend of his grandfather spoke about it at the funeral, and said it was experience Jerry never forgot.

“He told us, ‘When Jerry told that story, he was literally shivering like he was still there.’ It shows you how that stuff sticks with you.”

Beyond the brotherhood of military service, both men learned how each of them made sacrifices many people don’t know or can’t understand, and that bonds them more closely together.

“When I came home from Vietnam, (my father) didn’t say much and didn’t ask a lot of questions,” Dennis Marifke said. “He was just happy I was home. He never really questioned anything. He probably knew and didn’t want to ask because he didn’t really want to know what went on because he knew what he went through, so the subject never came up.”

Three men. Three wars. Three generations. Though one passed before the video could be made, this is still their words. Their story. Their life.