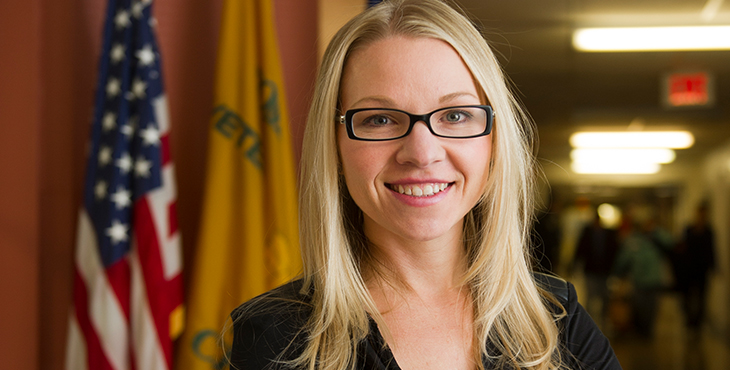 Dr. Katherine Iverson is a clinical psychologist and researcher in the Women’s Health Division of the National Center for PTSD. (Photo by Cydney Scott)

Dr. Katherine Iverson is a clinical psychologist and researcher in the Women’s Health Division of the National Center for PTSD. She is also a researcher at the Center for Healthcare Organization and Implementation Research (CHOIR); both centers are located at the VA Boston Healthcare System. In addition, she is an associate professor of psychiatry at Boston University School of Medicine. Her research focuses on women’s health and trauma—in particular, interpersonal violence and intimate partner violence. In 2014 she received the Presidential Early Career Award for Scientists and Engineers (PECASE) for her research into the effects of violence on women’s health and associated health care needs.

VARQU spoke with Iverson about the work she is doing with women Veterans who have experienced intimate partner violence, and those who have sustained a traumatic brain injury as a result of a violent encounter with an intimate partner.

Can you tell us about the presentation that you gave in December 2017 at the National Institutes of Health on intimate partner violence and TBI in women Veterans?

It was definitely an honor to be invited to this event on understanding TBI and violence among women. The overall goal of the NIH conference was to understand gaps in knowledge as it relates to the issue of TBI experienced by women. There’s been a lot of focus on the issue of TBI following sports injuries, as you’ve surely seen in the media, and a lot of focus on military personnel. But often the samples are male-dominated. So, it is not too often that people look at the health issues of women that result in concussion and more severe forms of TBI.

Some of my recent work focuses on women Veterans who experience TBI as a result of intimate partner violence. In my clinical work I found that women are often strangled or choked by intimate partners during their assaults. Or they might be badly punched or elbowed to the head, face, or neck, or have their head bashed against the wall. Unfortunately, this kind of head trauma isn’t uncommon, yet it often isn’t detected by women or the health system as being a cause of TBI. But it is actually quite prevalent among women who have experienced IPV.

There is research to suggest that women may experience more severe symptoms following TBI. My colleagues and I at VA Boston have done some studies in this area. We were able to look at Operation Enduring Freedom/Operation Iraqi Freedom Veterans who were evaluated for TBI within the VA and found to have confirmed deployment-related TBI. We compared men and women on their current health symptoms using the neurobehavioral symptom inventory, as well as their psychiatric diagnoses from their VA medical records. We did find—this was published in Women’s Health Issues, in 2011—across the board, women did report significantly more severe health symptoms than their male partners when adjusting for demographic variables and blast exposure, including more severe cognitive symptoms, affective symptoms, vestibular symptoms, and somatosensory symptoms.

Another thing that we found was women were much more likely to have diagnoses of depression, in particular, as well as PTSD with comorbid depression, than their male counterparts. One of the take-homes was that while fewer OEF/OIF women overall experienced TBI during deployment, we need to be careful not to ignore these women or minimize what they’ve experienced. Because when they do experience TBI, they appear to have worse psychosocial symptoms and a more complex clinical presentation.

Is IPV more prevalent in women Veterans than the general population?

There is research being done by our colleagues in VA on that question, especially that of my wonderful collaborator Dr. Melissa Dichter at the Center for Health Equity Research and Promotion. She has documented that women Veterans are at higher risk for IPV compared to women who have not served in the military. We know from our studies that IPV is not only common for women Veterans across the lifespan, but that some of the forms of violence that they experience are quite severe. So they are a vulnerable population in terms of experiencing IPV. We just don’t know why that is.

There are probably a lot of reasons for that and I think it’s complicated. For one thing, women Veterans may simply have more risk factors for IPV. We know in general that having parents who have experienced IPV, witnessing violence in the home, and being a victim of childhood sexual abuse or childhood physical abuse puts you at higher risk for IPV later in life. We also know that people who’ve had these adverse experiences in childhood are more likely to go into the military. So that’s one potential explanation, but it hasn’t been studied empirically.

And then there are issues related to the military and the training environment—being trained in using violence—that may be playing a role in terms of conflict. Also, women Veterans and women who serve in the military are more likely to partner with or marry other service members or Veterans, who are a population that is at higher risk of using IPV. It’s complicated; we are not really sure of the exact reasons why that is the case. Regardless, there are many opportunities to intervene within health care systems, such as VA.