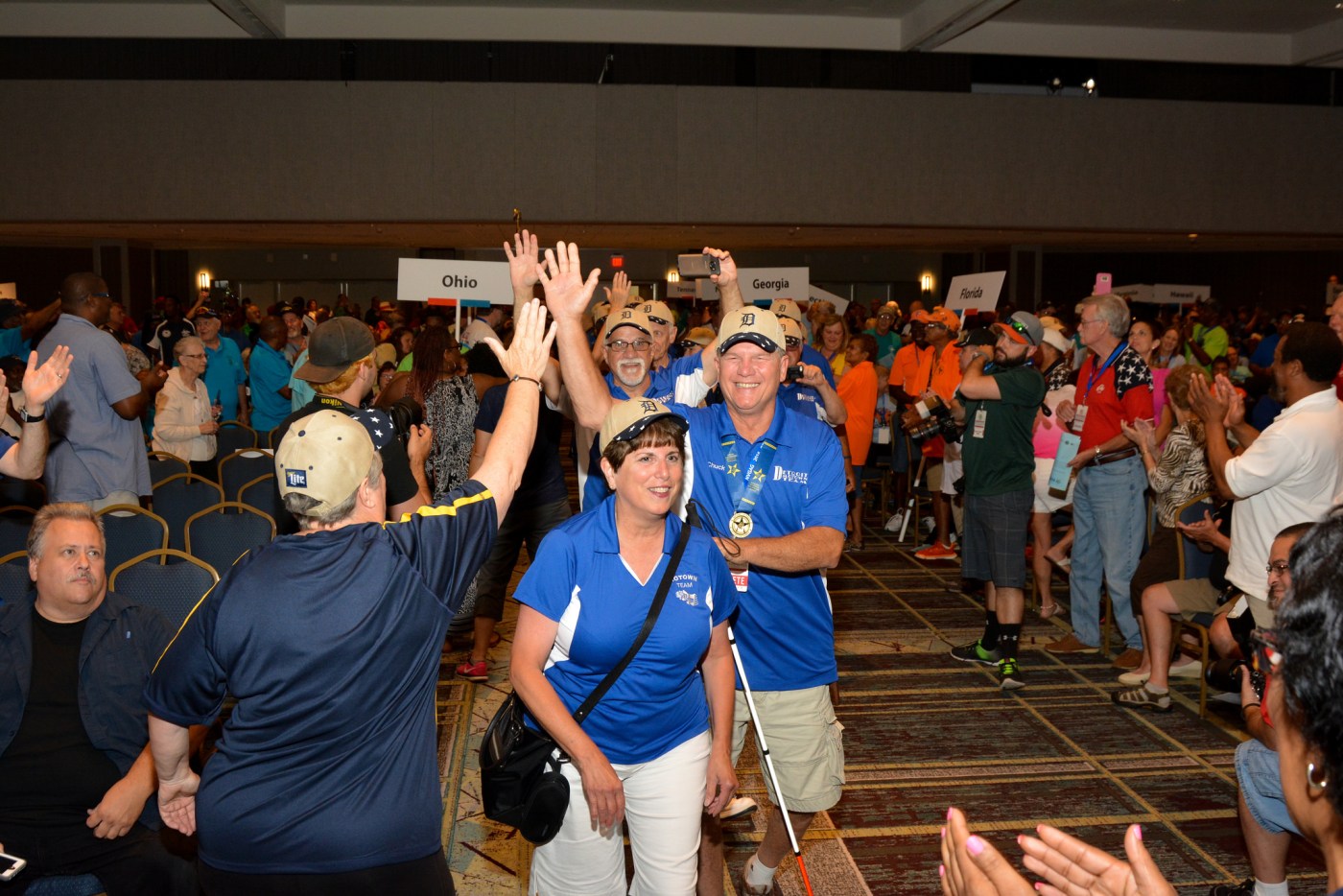 This Sunday, nearly 1,000 Veterans from across the country will march into the Albuquerque Convention Center for the annual Parade of Athletes at the National Veterans Golden Age Games. They’ll be representing their respective states and will be part of an atmosphere filled with spirit, camaraderie and teamwork.

These Veterans will also be treated to the debut of the song “Going for the Gold in Our Golden Years.” It’s the theme song for the Golden Age Games, which run from Aug. 3-8 in Albuquerque, New Mexico and offer a plethora of sports and recreational events for Veterans ages 55 and older.

Celebrated songwriters Bob Regan and Regie Hamm, as well as Bo Cox, the voluntary service specialist at the Chattanooga VA Outpatient Clinic of the Tennessee Valley Healthcare System, will be singing the theme song at the Parade of Athletes. Cox will also sing the National Anthem.

Regan and Hamm, along with Navy Veteran Howard Speir, wrote the lyrics to the song. The underlying theme of the music is to let Veterans know that, no matter their age, “we’re still rocking” and there “aint no stopping” as they go for the “gold in our golden years.”

Regan is a Grammy and Dove Award-nominated songwriter. He has had more than 200 songs recorded by famed contemporary country music singers, including Keith Urban, Luke Bryan, and Jake Owen, and by legendary artists such as George Strait, Don Williams, Hank Williams, Jr., Kenny Rogers, and Roy Rogers.

Operation Song founder Bob Regan and celebrated songwriter Regie Hamm, as well as Bo Cox, the voluntary service specialist at the Chattanooga VA Outpatient Clinic of the Tennessee Valley Healthcare System, will be singing the theme song at the Parade of Athletes at the National Veterans Golden Age Games.

He’s also the founder of “Operation Song,” a non-profit group based in Nashville, Tennessee that aims to “empower Veterans, active-duty military, and their families to tell their stories through song.” He and other national songwriters who contribute to the organization have written more than 600 songs that have been a form of therapy for wounded service members and Veterans with PTSD, traumatic brain injury (TBI), and other health conditions. The Veterans and service members receive a CD of the song to keep for themselves.

“I try to focus on one-on-one therapy with these Veterans telling their story,” Regan says. “The quality of the songs is uniformly high.”

Regan’s impetus for launching Operation Song stemmed from his involvement in armed forces entertainment tours about a decade ago.

“I thought in seeing all of the Veterans coming back with service-related injuries and illnesses that songwriting might be a good way to help them process their emotions,” he says. “All of the songwriters at Operation Song are very excited about doing this. It gives us a great opportunity to use our skill set for a higher purpose. The Veterans love it, and the therapists at VA love us. It’s a lovefest.”

Like Regan, Regie Hamm is one of the most popular figures in Nashville music circles. He’s a five-time writer of the year of the Nashville-based Society of European Stage Authors and Composers (SESAC).

He also won the songwriting contest in 2008 for the hit singing competition television series “American Idol.” His song, “The Time of My Life,” was performed by the show’s 2008 winner, David Cook, and set sales records with 136,000 in the first four days. The song was also No. 3 on the Billboard Hot 100 and No. 1 on the Billboard Top Digital Songs. Hamm earned Dove and Grammy nominations for writing and producing it.

Through Operation Song, Hamm wrote “We Got Lucky” with Army Veteran Scott Sullivan. Sullivan was a medic who served at a front-line aid station that took in casualties during heavy combat in the Iraqi capital, Baghdad.

In writing “Going for the Gold in Our Golden Years,” Regan first met for several hours with Speir, who has taken part in past Golden Age Games and is competing this year on a team called the “Tennessee Tasmanian Devils.”

“I just wanted to get all of his thoughts about the Golden Age Games in general, what it meant to him and his teammates, why he was doing it, and what the overall value was,” Regan says.

With those thoughts in mind, Regan then brainstormed with Hamm on the lyrics, and the theme song for the Golden Age Games was born.

They will be singing the song with Cox, who has performed many of the songs created by Operation Song, including one called “Chattanooga Rain.” The song was written by the wife of Marine Sergeant David Wyatt, who was killed in a 2015 terrorist attack on a Navy and Marine reserve center in Chattanooga.

Cox is “super excited” to be singing the theme song and the National Anthem at the Golden Age Games.

“I absolutely love music and have a heart for military service,” she says. “But I never dreamed that my God-given talent could or would be used in this capacity when I accepted the position as voluntary service specialist at the Chattanooga VA Outpatient Clinic two years ago. I am honored to take part.”