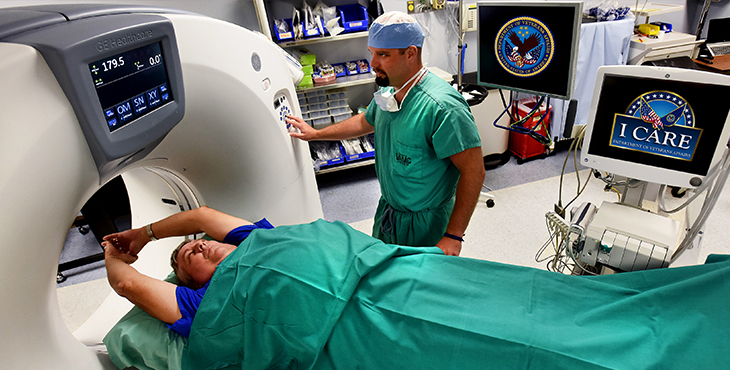 Above: Joshua Cooper prepares to administer a CT scan at the Central Arkansas Veterans Healthcare System. A VA study has found that smokers are often confused about the actual benefits and limitations of low-dose CT scans to screen for lung cancer. (Photo by Jeff Bowen, for illustrative purposes only.)

Regular cancer screenings can lower the chance of death from lung cancer. But they cannot reduce the risk of developing lung cancer for people who smoke. Patients who smoke seem to be confused about the actual benefits and limitations of lung cancer screenings, according to a study by the VA Center of Innovation for Veteran-Centered and Value-Driven Care in Seattle.

Researchers asked smokers a series of questions about smoking and lung cancer screening. Their answers showed that most patients were mistaken about the benefits of such screenings and smoking in general. Only 7 percent of patients answered all five questions correctly.

In light of these findings, Dr. Jaimee L. Heffner, lead author on the paper, emphasized the importance of communicating to patients the importance of quitting rather than just relying on screenings to protect them from cancer. “Quitting smoking is by far the most important thing a person can do to prevent lung cancer as well as a host of other diseases caused by tobacco use, and it’s important that this message doesn’t get lost in the discussion of lung cancer screening,” he said. Heffner, with the Fred Hutchinson Cancer Research Center in Seattle, collaborated with the VA team on the study.

The results appeared online June 7, 2018, in the Annals of the American Thoracic Society.

In 2011, the National Cancer Institute released the results of its National Lung Screening Trial. The trial screened more than 53,000 current or former heavy smokers for lung cancer using either a standard chest X-ray or low-dose computed tomography. LDCT uses X-rays to take multiple scans of the entire chest, providing a more detailed image of the lungs than a single chest X-ray.

The study revealed that patients who had LDCT scans had a 15 to 20 percent lower risk of dying from lung cancer than those who had a standard chest X-ray. By giving a more complete picture of the chest and lungs, LDCT gives doctors a chance to catch and treat lung cancer more effectively than the old method.

As a result of this study, more LDCT lung cancer screenings have been implemented nationwide, including in VA. But while this type of screening can reduce deaths from lung cancer, it is unclear how well patients understand the benefits and limitations of LDCT scans.