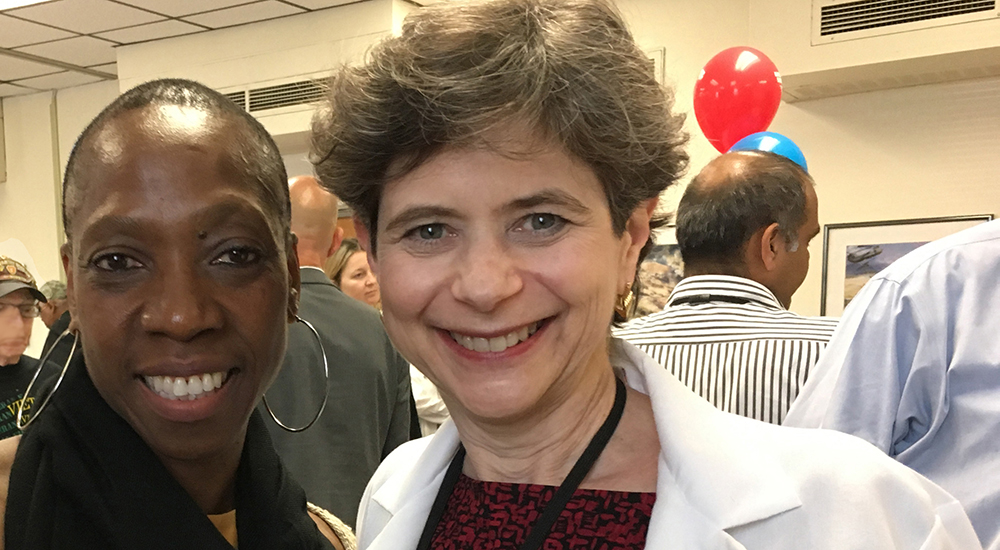 Lucretia Gayle (pictured above left, with Oncologist Dr. Andrea Leaf on the right), a 21-year Army Veteran and New York City Police detective who specializes in investigations of organized crime, weapons and drugs, described the highs and lows of her life after receiving a diagnosis of stage 2 breast cancer a year ago.  Gayle recently talked about her experience at a Cancer Survivors Day event held June 6 at VA’s Brooklyn campus.  The annual program was attended by about 60 patients, family members, friends and VA caregivers.

Explaining how a feeling of loss of control was the hardest part for her, Gayle was extremely appreciative of the care and compassion provided by oncologist Dr. Andrea Leaf and she named many nurses, among others, who treated her at VA. Gayle is now feeling well and increasingly open about sharing her experience to help fellow patients.

“I was angry. I had no way of dealing with this.”

Gayle grew up mostly in Queens and after high school and a year of college, became a police officer with the NYPD and joined the military, serving in the Army reserve. She was deployed twice to the Middle East, serving for a year in Iraq in 2002 and then going back to Iraq for 18 months in 2004. For most of the time she was driving a truck – an 18-wheeler. Her unit moved around a lot near Baghdad and other locations carrying fuel for air craft and trucks. Hurt in Iraq and medevacked out in 2004 with a back and leg injury, she received rehab treatment for four years at Walter Reed National Military Medical Center.

When she was honorably discharged in 2009, she had served 21 years. “I went back to my job as an undercover police officer on the street and then was promoted to detective. I serve in a unit that investigates organized crime, drugs and weapons.” She completed college earning a bachelor’s degree in 2015.

Gayle says she was fine until 2016, “when I had two inconclusive breast biopsies.” A month later, in February, another biopsy was positive. “I had stage 2 breast cancer. It was a lot to take in,” she says.

Talking openly about her experience, Gayle says, “I’m tough. But with everything else I’d been through with my deployments and recovery from injury, I knew I would recover. I was OK. You get hurt, you get better. It’s not a longtime thing. But, with cancer, oh my God. It made me feel like I had no control. I was angry. I had no way of dealing with this. It’s like a newborn baby doesn’t come with instructions. You have to learn by yourself. I’m still trying to deal with being alone. The numbness in my fingers and toes that comes from the treatment sometimes bothers me, but I’m getting through. I’m coping with it day by day.”

Doctors told Gayle to make a plan and to do it quickly. In April, Dr. Heuldine Webb performed the surgery to remove a breast and one lymph node. There were complications. “So, it wasn’t all over and done the way I thought it would be,” she says.

“My first doctor after the surgery was a man but I felt a lot more comfortable when I changed and had Dr. Leaf as my doctor. Dr. Leaf is awesome. I started on chemo and was hospitalized twice over that period. Then I received radiation every day for seven weeks. That ended in February 2018. While I was undergoing radiation therapy, I was part of a support group. It was made up of older men, Vietnam Vets and one other woman. We had a good time.”

Finished with her radiation treatment and feeling much better, Gayle will be going back to her service as a police detective. “I love the job. It’s helping people in the community. It’s rewarding getting the bad guys locked up.”