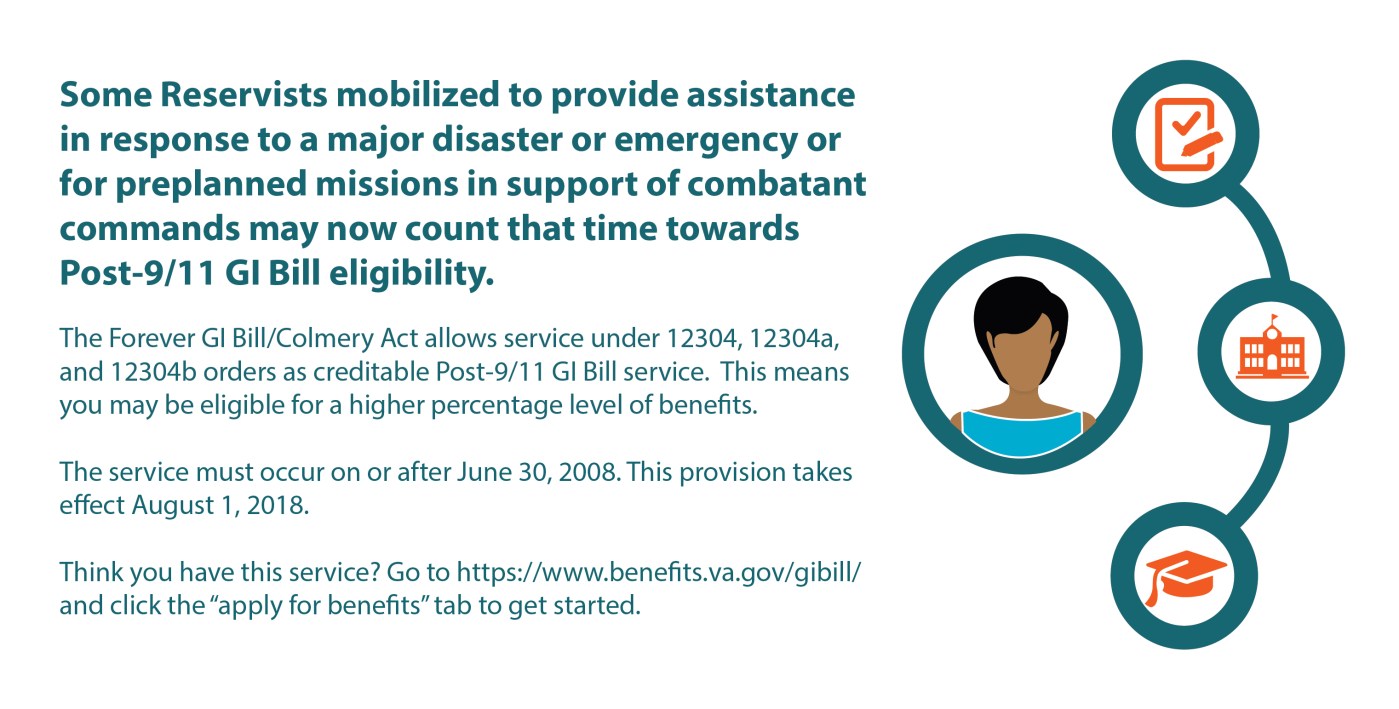 The Harry W. Colmery Veterans Education Assistance Act, also known as the “Forever GI Bill,” was passed by Congress and signed into law last August. The Forever GI Bill expands education benefits for some members of the Reserve effective August 1, 2018.

VA may now consider more reservist service as qualifying time towards eligibility for the Post-9/11 GI Bill, including:

* Major disasters or emergencies, as authorized under section 12304a of title 10, U.S. Code

* Pre-planned missions of up to 365 days in support of combatant commands, as authorized under section 12304b of title 10, U.S. Code

The service must occur on or after June 30, 2008. The benefits are payable for a course of education beginning on or after August 1, 2018.

It’s important to note that serving time under title 10, U.S.C. 12304a or 12304b doesn’t automatically qualify for Post-9/11 GI Bill benefits. The Post-9/11 GI Bill has a minimum service requirement of at least 90 days, although periods of service for separate missions can be combined to meet the 90-day threshold.

Here are some examples to help you understand this provision of the Forever GI Bill:

Prior to August 1, 2018, those three months under 12304a were not creditable active duty service, so the person was eligible for the 60 percent tier with 17 months of creditable service. Now, thanks to this new provision of the Forever GI Bill/Colmery Act, the three months of service under title 10, U.S. Code 12304a can be added. The reservist now has 20 months of qualifying service and would be eligible for the 70 percent tier.

Or, let’s say a reservist had only 90 days of service under title 10, U.S. Code 12304a. He or she wouldn’t have qualified at all. With this law change, the reservist now has qualifying active duty and would be eligible for the 40 percent tier.

If you haven’t explored your options to use your education benefits, you can start by visiting the GI Bill Comparison tool. You can see how to maximize your education value and look up the college, training school, or even apprenticeship program you’re interested in attending. You can also see how much your GI Bill benefits will cover and if you’d have any out of pocket expenses.