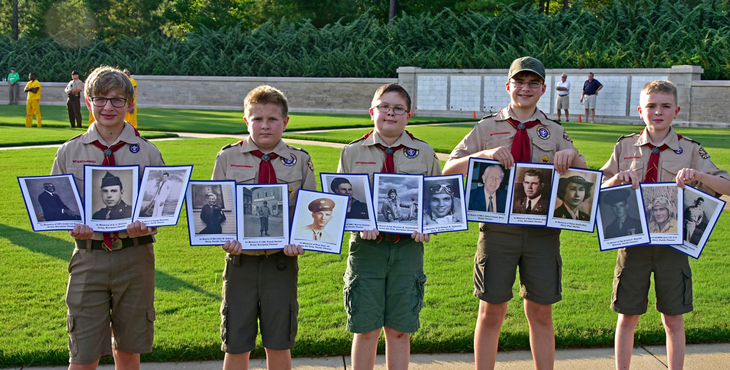 The Spirit of ‘45 Day is a nationwide campaign, unanimously voted by Congress in 2010, to establish the second weekend in August for honoring the legacy of the World War II generation. Each year various Veterans organizations host events that honor World War II Veterans and other members who served during this war period.

Activities at this year’s ceremony held at Alabama National Cemetery in Birmingham focused on special tributes by descendants of WWII Veterans who served in the Pacific and European theaters and on the home front. These tributes included stories read by three grandchildren of three separate Veterans, and one grandchild of the founder of the American Rosie the Riveter Association, Dr. Frances Carter. Youth from the local Boy Scout Troop 404, American Legion, and Pelham Alabama High School athletic teams participated in a procession with each displaying 8 x 10 photos of WWII Veterans.

The ceremony also included placing roses on the gravesites of more than 800 WWII Veterans interred at the cemetery, a re-enactment of the raising of the flag at Iwo Jima, a wreath laying in memory of WWII Veterans who passed during and after the war, a flyover, musical selections and the playing of TAPS.

In reflecting on the day’s events, Cemetery Director Eldon Woodie, said, “today we recognize the historic contributions made by World War II-era Veterans interred at this cemetery.  This event was created by the 150 dedicated people who make up our support committee and we are so proud of the effort they’ve made to engage World War II Veterans, families and youth in this ceremony. This is a special opportunity for our youth to learn about the price that was paid for their freedom.”

The cemetery is one of 136 VA national cemeteries. For information on events or burials please call, 205-665-9039 or visit www.cem.va.gov for a listing of events held at cemeteries in the National Cemetery Administration.

Richelle Taylor is a public affairs specialist with the National Cemetery Administration. She has worked with the administration since 2011. She is a US Navy Veteran and served during Operation Desert Storm.