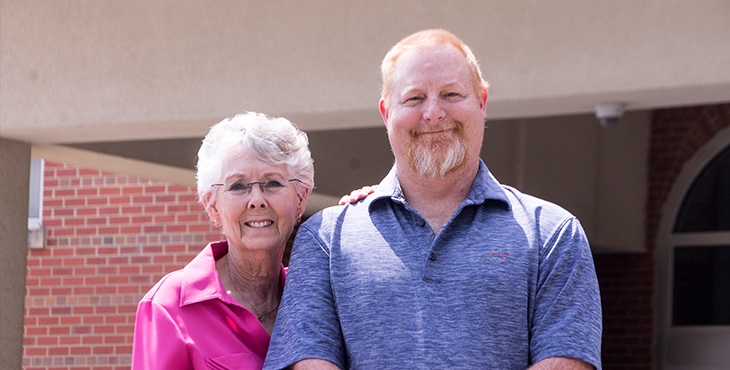 Above: Shawn Christensen, who has been coping with chronic pain triggered by a bad fall he incurred during his Army service, has relied on his mother, Maxine Christensen, for caregiving help in recent years. (Photo by Amil Daniels)

For three decades, Maxine Christensen counseled Native Americans on the use of drugs and alcohol. She met with people who showed an excessive use of or were addicted to marijuana, cocaine, heroin, or liquor.

She always felt confident in her ability to connect with those in need of help.

Her command of the situation hasn’t been the same in the seven years she’s been a caretaker for her son, Shawn. He has chronic back pain stemming from nerve and joint damage that resulted from a bad fall he took while carrying heavy equipment at Fort Hood, an Army base in Texas. The back pain has triggered periods of depression and anger that have left her grasping for solutions.

“The hard part for me is that I was a counselor for 30 years,” she says. “That was my profession. Not to be able to handle this has been just unbelievable for me. I couldn’t read my son. I probably thought I could say certain things that a counselor would say, not realizing that I needed to separate the two.”

Maxine Christensen is one of a growing number of parents who are caring for their children who have served in the post-9-11 era. Many of the military personnel and Veterans who deployed to Iraq and Afghanistan are returning home with serious physical and mental health problems. A large percentage of them are under the age of 30, are unmarried, and are battling traumatic brain injuries, PTSD, depression, or, like Shawn, musculoskeletal injuries.

In her pursuit of more support, Maxine Christensen has been participating in a randomized VA trial that is aimed at improving the experience of parent caregivers. The trial, which is being led by Dr. Linda Nichols and Dr. Jennifer Martindale-Adams of the Memphis VA Medical Center, is comparing the effectiveness of two programs: Resources for Enhancing All Caregivers’ Health in the VA (REACH VA), a well-established caregiver initiative that involves one-on-one telephone sessions focusing on education, support, and skill-building; and the control group, which is based on a recorded webinar presentation.

To read more of the Christensens’ story, and about the VA study in which Maxine Christensen is taking part, click here to visit VA Research Currents.