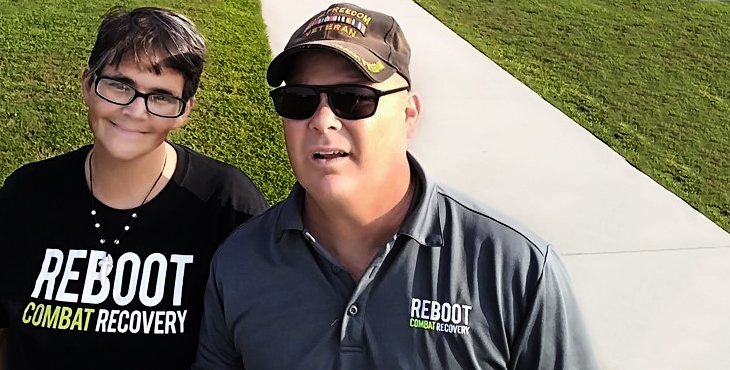 Panama City Veteran couple Joe and Jill Rodgers know what it’s like to hit “rock bottom” in a marriage. They’ve been there. Their communication issues and circumstances nearly wrecked their family. They knew they desperately needed help to salvage their marriage.

Now, after celebrating 31 years of marriage in early September, they want to use their own life experiences, along with the relationship skills they gained from a recent Gulf Coast Veterans Health Care System’s Warrior to Soul Mate (W2SM) facilitator’s course to help couples like them across the coast.

The W2SM workshop, facilitated by GCVHCS Chaplain Jo Kirkendall with help from her husband, Jim, is designed to help couples “renew” and “reconnect” to their spouses and partners through the development of communication skills. Couples will learn to understand the “emotional jug” and how to empty it, untangle a “love knot,” and many other skills.

Roughly halfway through their marriage, the Rodgers realized that things were negatively changing in their marriage. Communication between them was eroding, if it was even happening at all, especially during Joe’s 15-month Operation Iraqi Freedom deployment with an Army communication unit in 2003.

“I started to see him change, his attitude and anger, while he was deployed,” Jill said. “So, the less contact I had [with him], the better. Our communication started splitting then.”

Not only did their communication start to split, Jill said Joe was starting to separate himself from their three teenaged children. Things got worse when he returned home.

“When he got home, he was drinking a case of beer a night,” Jill said.  “[Joe] was staying in the room, sleeping on the floor.”

Joe acknowledged that seemingly odd behavior, but to him, it wasn’t odd at all.

Joe often turned to alcohol to help him cope with all that was on his shoulders.

Soon after, Joe left the Army due to medical issues, and the family moved from Fort Riley, Kan., back to their native state of Tennessee for three years.

Then they moved to Panama City in 2009. As life can do, it took a few more unfortunate turns for the Rodgers, the point where they both agree their marriage approached “rock bottom.”

Joe said his brother, a Gulf War Veteran, took his own life in 2010. Joe was struggling to hold down jobs during this time, too.
“When he was removed his last job in 2011, it really put him…,” as Jill voice trails off, “it was gone. We were gone.”

Joe also had what Jill describes as an “emotional affair” with another woman in 2011. On the day after Christmas, Jill found out about Joe’s affair. Jill lost her job the following March. Between December and March, Joe tried to commit suicide once; Jill tried several times.

“Yep, that was rock bottom,” the couple agreed.

The couple felt they were at a crossroads at that point.

“I said either we commit to each other, or we go our separate ways,” Joe said.

“We were empty, we were numb,” Jill said. “But we put all we had into trying to make it work, and we didn’t have much.”

Jill credits the support from their “church community” in Panama City that turned things positive for the couple. In 2013, Joe saw a W2SM flyer in the VA clinic, contacted Chaplain Kirkendall, and attended the first W2SM retreat event in June in Mobile, Ala., that year.

“It was the most emotional weekend I ever had,” Joe said.

“It was CRAZY emotional,” Jill said, “but the best thing about it was that we saw other couples going through the exact same thing. We weren’t alone.”

When the couple returned home, they immediately started using the new tools they learned in W2SM, particularly the “daily temperature readings” and “emptying your emotional jug.”

Jill said the couple started to recognize when they had to empty their jugs, and just listened to each other, and they didn’t always try to fix what was ‘wrong’ with the other person.

“It was constant work and there were still a lot of trust issues,” Joe said.

Several months after attending the W2SM event, and after Joe “fully committed to Christ,” the positive changes were evident and happening. Hollow words were being replaced with positive action, a very important change for Jill.

“Words didn’t mean anything to me, at that time,” Jill said.

The “collision” of attending W2SM and having Jesus in their lives were the Rodgers’ “saving grace,” Joe said.

From that time to present day, the Rodgers have been assisting Chaplain Kirkendall and Jim with facilitating W2SM workshops across the gulf coast, until the opportunity to become facilitators themselves presented itself in mid-August in Fort Walton Beach, Fla.
In that event, Kirkendall, a national trainer, trained a dozen or so GCVHCS employees, VA volunteers, and the Rodgers to share the W2SM tools with other couples they support. The Rodgers plan to share the knowledge with Veterans through their Reboot Combat Recovery program, which is a faith-based course designed to help Veterans address “wounds” to their soul.

Kirkendall speaks about the Rodgers like a proud teacher would speak about her prized pupils.

“They have grown, and they have developed the confidence and abilities themselves, as presenters and teachers,” Kirkendall said. “Because they have lived it and worked it, they model it so beautifully for others [to learn from].”

Kirkendall has facilitated W2SM for approximately 60 couples over a dozen events since she began W2SM in the region in 2013. The next W2SM event is scheduled for Sept. 22-23 in the Fort Walton Beach community. It is open to Veterans, Reservists, National Guard members and their spouses/partners. To register or for more information about the program and future workshops, call 228-523-5730.

About the author: Jerron Barnett is a public affairs specialist at the Gulf Coast Veterans Health Care System.