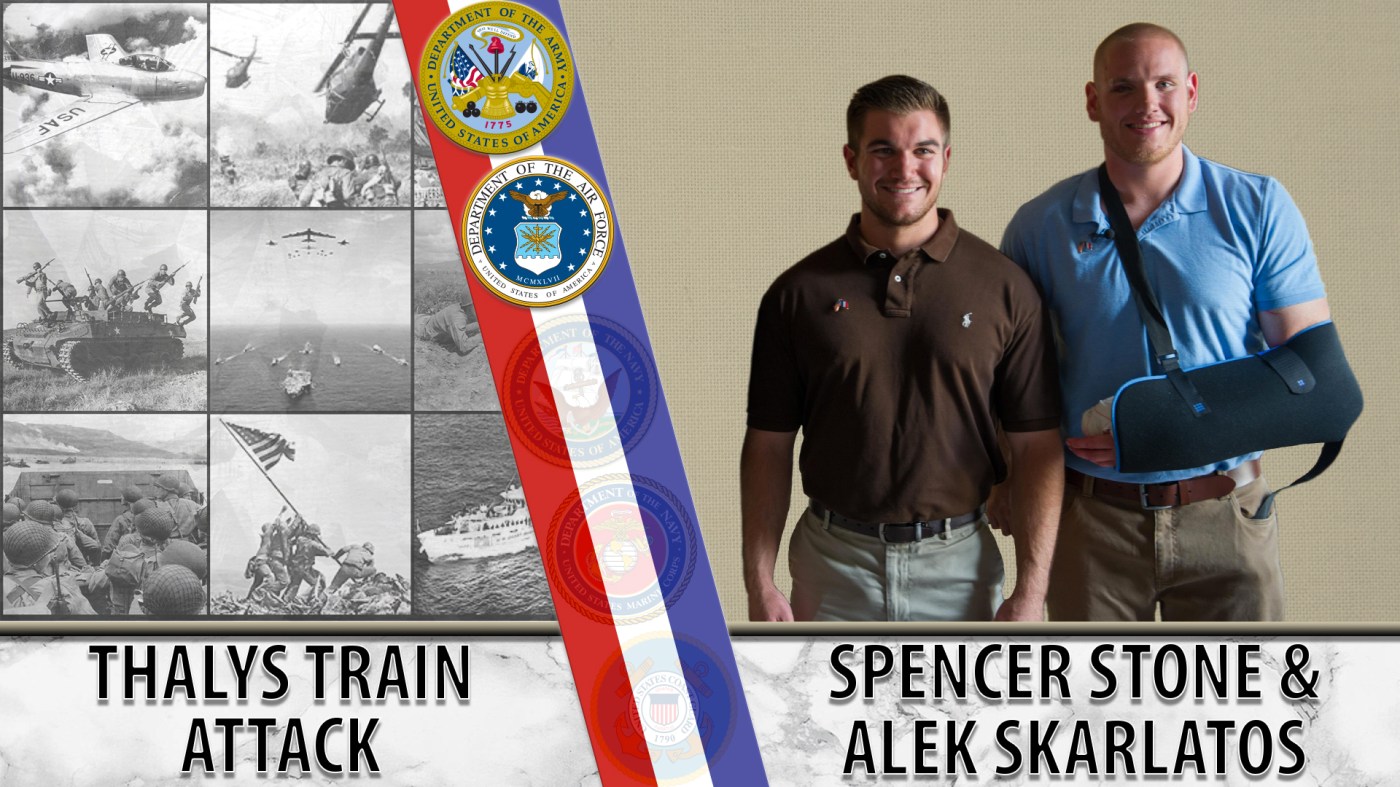 While on a vacation through Europe, childhood friends Air Force Veteran Spencer Stone and Army Veteran Alek Skarlatos found themselves in the middle of a potential terrorist attack. Both men, along with their friend Anthony Sadler, British native Chris Norman and an anonymous Frenchman, worked together to stop Morocco native Ayoub El Khazzani from shooting other passengers on a train.

Both men joined the service after high school, Alek joining right after and Spencer enlisting when he was 20. Spencer felt that he hadn’t applied himself in high school and wanted to make up for it. He was interested in being a pararescue but was declined due to his lack of depth perception. Eventually, Spencer found himself in a medical technician program, which worked out for him as he wanted to be a paramedic firefighter once he returned home.

Spencer was in the Air Force for four years and worked as an intake clerk for children needing treatment at the Travis Air Force Base. He was also stationed in San Antonio, Las Vegas and Azores. He was at Azores immediately prior to the train attack.

Alek found himself enlisting in the Army National Guard because he didn’t want the full commitment of duty and he was more interested in the jobs the Army had. He completed basic training at Fort Benning and eventually went to sniper school. He was first stationed in Oregon but was asked to go to Afghanistan for a year, which is where he was immediately before the train attack.

Both Spencer and Alek had some vacation leave coming up, and they decided to travel through Europe visiting various cities. Spencer and his friend Anthony Sadler met up with Alek in Amsterdam and boarded the train to Paris via Brussels.

The Thalys train attack occurred on Aug. 21, 2015, about two hours into their trip. Spencer was asleep when the attack first started but woke up once the first shot was fired. Since he was sitting in the aisle seat, he was the first person to charge the assailant. Spencer charged the gunman, uncertain of what would happen within the next few minutes.

Spencer was able to put the attacker in a chokehold, at which point the others could help restrain the gunman. Spencer describes the attack as, “the longest two minutes of their lives.” After the gunman was restrained, Alek surveyed the train cars for other potential gunmen.

There were no fatalities during the attack, and the only injuries were to the gunman, Spencer and Mark Moogalian.

Immediately following the attack, the men didn’t think it was going to be as big of a news story as it was. However, the men quickly rose to international recognition. Spencer and Alek were both awarded the Legion of Honour, which is France’s highest recognition. Spencer was also awarded Belgium’s Civic Medal 1st Class for Bravery. Spencer and Alek also wrote a book with their friend Anthony and journalist Jeffery E. Stern titled, The 15:17 to Paris. The book was later adapted into a movie directed by Clint Eastwood, where the men played themselves.

Both Spencer and Alek still had time in their military contracts following the attack. Spencer finished his service as a Staff Sergeant in 2016. Along with the Legion of Honour, some of Spencer’s decorations include the Airman’s Medal, the Purple Heart, the Outstanding Unit Award, the Global War on Terrorism Service Medal and the Air Force Good Conduct Medal. Following his time in the service, Spencer spends his days doing public speaking engagements as well as hoping for more acting roles.

We don’t know for certain what would have happened had Spencer and Alek not intervened that day. It is known that there was a potential terrorist attack on the Thalys Train. Hundreds were saved because of their split-second decision to risk their lives to serve and protect.

We honor your services.