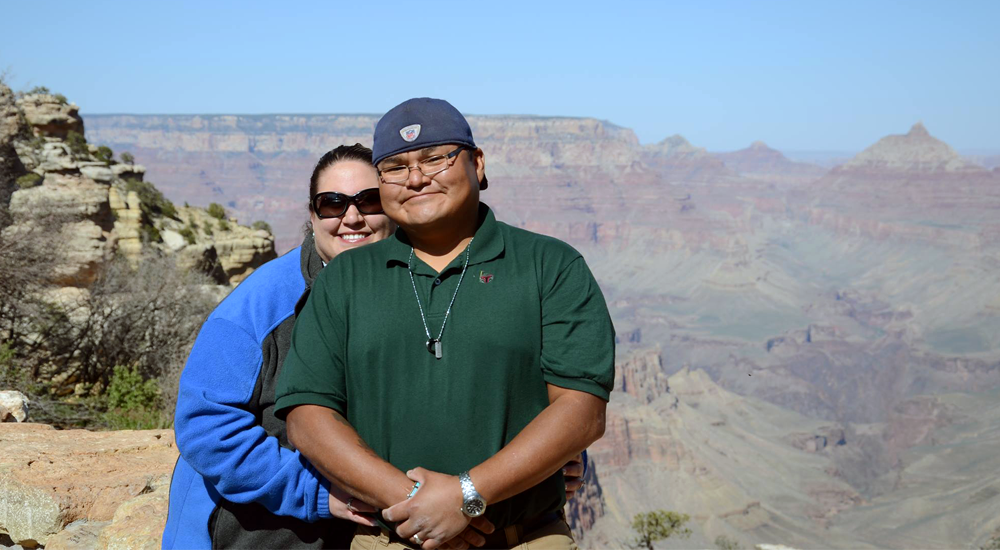 When Chani Kaibetoney first met with the doctors, there was absolutely no doubt in her mind that she would be willing to devote her life to be her husband’s caregiver.

Chani and Larry are pictured above at the Grand Canyon.

Her husband Larry was almost killed in a suicide bombing in Mosul, Iraq, in December 2004.

Larry had survived severe, life-threatening wounds caused by shrapnel from an explosive device. Twenty-two others were killed, and a large number were wounded.  When Chani met with the Army doctors upon his return to the United States, Larry had severe wounds all over his body, and it was immediately clear to her that Larry would need full-time, around-the-clock care.

“I was willing to do whatever I can to take care of him.”

“He was my everything, and I was willing to do whatever I can to take care of him,” she said.

She has been with him every step of the way from the time he returned to the United States and went through a series of surgeries and recovery at Madigan in Ft. Lewis, WA. She learned from the doctors and nurses at the Army Medical Center how to pack his wounds.

“The wounds were through and through, you literally could see through his legs in some areas, so they needed to be packed to prevent infection.

He was in constant pain.  She learned about how to help take care of his medical needs and was involved in helping him receive occupational therapy.

After his medical retirement from the Army, Larry transitioned to VA care. He has received great health care, Chani says, but was tough on them financially.  Though he was receiving 100 percent disability, she had to quit her job in jewelry sales to care for him. During their transition, VA’s Program of Comprehensive Assistance for Family Caregivers was not yet in place.

But she learned how to care for him, to help oversee the provision of his many drug prescriptions for pain, including opioids.  He had to use a nerve stimulator, with wires going up the back of his spine, to mask the pain and help him get off of dependence on too much medication.

And just as challenging to her as his physical wounds were the major issues he has had with posttraumatic stress disorder (PTSD).

“He has nightmares frequently.  It gets to the point where I have to wake him up and focus him and get him to calm down.”  He receives care for PTSD as well as for his health care issues through VA.

Kaibetony combined her experience doing all of those needed functions as his caregiver and now receives a stipend and other services through VA’s Program of Comprehensive Assistance for Family Caregivers which was developed in 2011.  She also applies what she has learned in her role to be a Caregiver mentor for others.

“I love helping other caregivers work through any issues that they may have. I have conducted local seminars about caregiving and PTSD. It is important to me to open up a line of communication with the family and friends who are caregivers to loved ones, especially those with PTSD. I want to get rid of the stigma surrounding PTSD and bring awareness to the issues that are faced by caregivers of Veterans.

“Caregivers wear so many hats. I am his wife, his nurse, his caregiver and handle administrative things for him.”

She advises caregivers of the need to take care of themselves. “I tell other caregivers what does and doesn’t work based on my experience,” she said. “Caregivers are more receptive to receive information from other Caregivers.

“I tell them to learn how to be an advocate, don’t be afraid to speak up, pick your battles with doctors and with your spouse. Understand others are there to help.  Do your research.  And take time for yourself.”

She lives with Larry in the beautiful mountains East of Albuquerque, New Mexico, with their dogs, goats, llamas, and chickens.  They enjoy taking part in hobbies and activities such as hot air ballooning. They watch movies and television together, and she says they enjoy being homebodies and watching over their animals.  “We love the peace and quiet out here, even with our little zoo!”

She is now supplementing her income through direct sales of jewelry online.  But being a Caregiver will always be her first and most important job.

“I tell caregivers that you’re in a very important position, be proud of how you do this,” she said. “Know that you are not alone and don’t be afraid to reach out as there is help available.

“There’s lots of weight that is on you as a caregiver, but it’s worth it.”