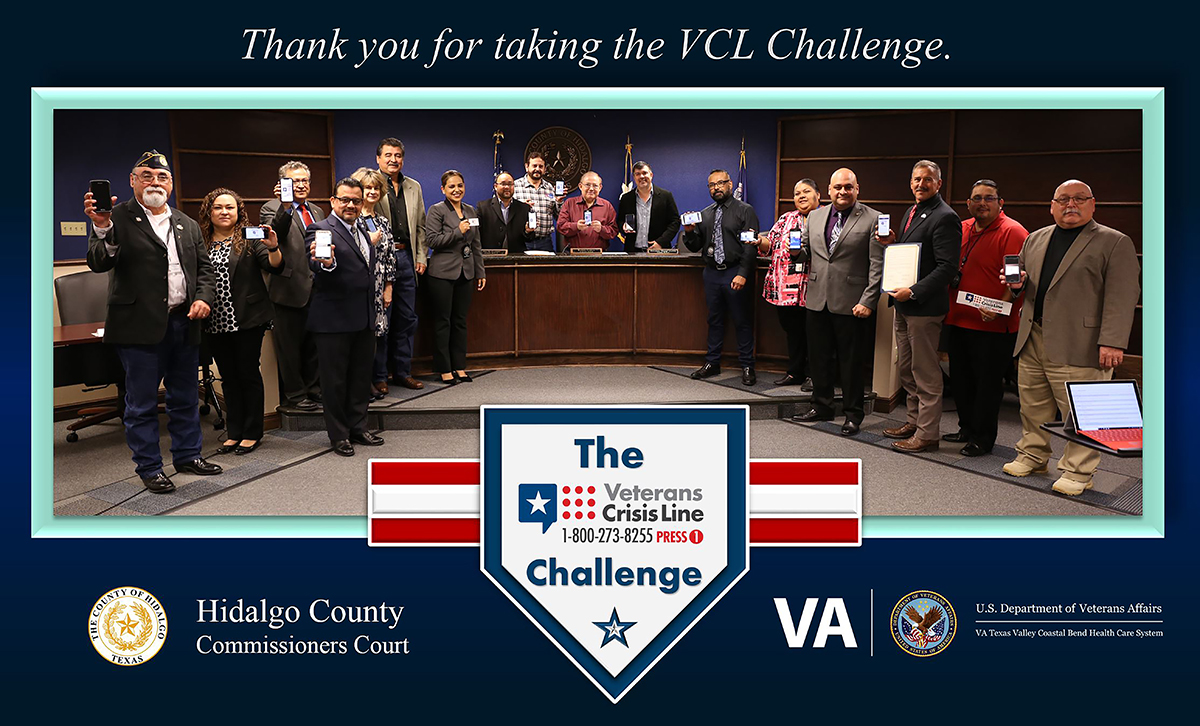 Members of VCB and CSA attended and spoke at a formal meeting at the Hidalgo County Commissioners Court.

“Thank you for having us here today. We’re here to raise awareness of a very serious issue in regards to the needs of Veterans.” said Jaime Longoria the executive director for Hidalgo County CSA.

“Nationwide, [an average of] 20 Veterans per day lose their lives to suicide,” said Dr. Rodolfo Quintana, a psychologist and suicide prevention coordinator for VCB. “Of those, 14 had no contact with the Veterans [Health] Administration whatsoever.”

The high average of Veterans not having contact or enrollment in the VA can make the transition to civilian life a very difficult one, especially for those who return home with injuries and mental health issues such as those associated with Post-Traumatic Stress Disorder, which is more commonly referred to as PTSD.

Staff members from VCB expressed their belief that everyone has a role to play in preventing suicide.

“As a 20-year veteran and being born and raised in the Valley, I have seen firsthand the impact that suicide can have on an organization or community,” said Homero Martinez III, the acting director for VCB. “Suicide is a national health concern that affects all Americans, whether or not they have served in the military.”

After members from both VCB and the Hidalgo County CSA spoke, members of the Hidalgo County Commissioners Court passed resolution 67765 in support of the Veterans Crisis Line, a free, confidential resource that’s available to anyone, even if a person is not registered with U.S. Department of Veterans Affairs (VA) or enrolled in VA health care.

The caring, qualified responders at the Veterans Crisis Line are specially trained and experienced in helping Veterans of all ages and circumstances.

Veterans and service members in crisis have access to specially trained responders to assist them, 24 hours a day, 365 days per year.

As a sign of unity for a common and noble cause, members of the commissioners’ court joined team members from VCB and the CSA for a group photo in order to complete the Veterans Crisis Line Challenge.

The Veterans Crisis Line Challenge, which is commonly referred to as the VCL Challenge is completed by someone who programs the VCL phone number [1-800-273-8255 and Press 1] to their phone contacts list and then posts a photo or video of it on social media sites as proof.

“It is a good thing to have this number saved never know when you might run into someone who needs it,” said Director Martinez.

Members of the commissioners’ court offered thoughts about the resolution and the county’s new initiative in promoting the Veterans Crisis Line and preventing Veteran suicides.

“I hope we continue to partner and reach out to more Veterans,” said Joseph Palacios, Hidalgo County Precinct 4 commissioner. “This is a very critical issue we are facing that needs special care; thank you [Hidalgo County Community Service Agency] for securing this grant.”

Hidalgo County when further in showing their support with a statement on their official Facebook site which read encouraged all Hidalgo County residents to save the number and to share it with others.

The meeting at the commissioners’ court, the partnership with CSA and the completion of another VCL Challenge is part of the ongoing local and national efforts by the VA to raise awareness about the importance of suicide prevention, which remains a critical part of the federal department’s fourth top priority transforming our business systems, which VA Secretary Robert Wilkie,  explained in a state-of-the-VA message, “is also about more robust partnerships with state and local communities to address challenges like Veteran homelessness and suicide prevention.”

If someone believes a Veteran in their life may be contemplating suicide, that person is encouraged to call and speak to a trained professional at the Veterans Crisis Line at 1-800-273-8255 and Press 1.

They can also go online and chat at the website https://www.veteranscrisisline.net/get-help/chat ; or they can use their text messaging service at 838255.

In November 2011, the Veterans Crisis Line introduced a text-messaging service to provide another way for Veterans to connect with confidential, round-the-clock support, and since then has responded to nearly 98,000 texts.

For more information about the Veterans Crisis Line and suicide prevention, refer to the links below.

(Disclaimer: Mentioning of any private organization, or individuals, and the use of any images or logos of thereof is strictly for informational and news purposes. No federal endorsement intended or implied.)