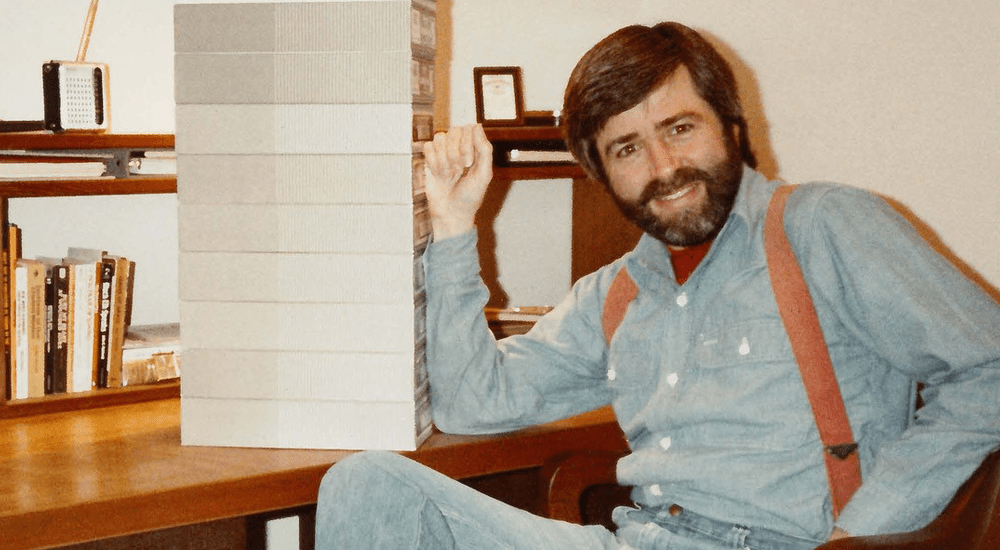 VA writer Dan Bruneau heard about a critical connection between famous author William Least Heat-Moon and VA health care. Heat-Moon is pictured above with the manuscripts for his first book, shortly after emergency surgery at the Columbia, Mo. VA Medical Center likely saved his life.

Critically recognized author William Least Heat-Moon’s latest book, Celestial Mechanics, is fiction—but the Navy Veteran will tell you it’s a fact that neither it nor his other works would have been published if not for an emergency visit to a VA hospital nearly 38 years ago.

On New Year’s Eve in 1981, Heat-Moon was nearing completion of his first book, Blue Highways.  As he returned to his home in Columbia, Mo., after visiting his family in Kansas City, he began to feel ill.  Although he made it home safely, the next morning, his wife took him to the emergency department at the Harry S. Truman VA Medical Center in Columbia.

“Without VA, I likely would have died of a burst appendix,” Heat-Moon said.  “Had that happened, it would have been the end of Blue Highways, too.”

That would have been a heartbreaking fate for both author and book because the road they traveled to publication was long and challenging.  In fact, events that precipitated Heat-Moon’s undertaking were equally so.

Blue Highways was born of desperation.  In 1978, Heat-Moon lost his teaching job due to declining enrollment at a college in Columbia, and his ten-year marriage was crumbling—meaning he also moved out of his house into a small apartment.

“I was desperate,” he recalled.  “I was 38 years old, over-degreed and undereducated, and I’d ruined about everything I touched.  I wasn’t sure where I was going, but I had to go somewhere.”

Three Months on the Road

When he returned home, he began writing Blue Highways, the story of his trip and an adventure that proved to be an arduous journey.  Beginning on July 4, 1978, over nearly four years he wrote and rewrote his manuscript six times and received 12 rejections from publishers.  In the first two years, he also received nearly 700 rejection letters after inquiring about teaching jobs.

Heat-Moon supported his writing by working as a clerk in the Probate Office at the Boone County Courthouse and on the loading dock of the Columbia Tribune newspaper.  During the inevitable emotional highs and lows, he continued to push forward, writing mostly on weekends.

“Zen and the Art of Motorcycle Maintenance was rejected 122 times before it was published,” Heat-Moon said.  “I told myself if Robert Pirsig, the author, could persevere through 122 rejections, then I could withstand 123.”

Thankfully, it never came to that.  Heat-Moon eventually found the right advocate for his book, Peter Davison, an editor at the Atlantic Press in Boston.  Davison asked him not to send the book to any other publishers and was guiding it toward publication as Heat-Moon continued to refine the manuscript.

That’s when Heat-Moon’s appendix added a twist, and publication of the book was threatened.  At the VA hospital in Columbia, Dr. Frank Mitchell diagnosed Heat-Moon’s appendicitis, and Dr. Kirt Nichols performed surgery and provided post-surgical care.

“Because of those two VA doctors, I was still alive, and publication of Blue Highways was delayed only a week,” Heat-Moon said.  “I still hear from people who say the book changed their lives.  That means VA saved not only my life—it helped change other lives as well.”

Among those affected by Blue Highways is Dr. Thomas Edes, VA’s Director of Comprehensive Geriatrics and Palliative Care.  Dr. Edes is currently rereading the book that made a powerful impression on him more than 30 years ago.

“I loved reading about the small towns and the fascinating people who lived there,” Dr. Edes said.  “The world has changed a lot since then, so reading Blue Highways now is a bit nostalgic.  The vivid descriptions of the people, what mattered to them and the way they spoke made me feel like I was right there listening.  Those stories still resonate, and that’s part of what makes it such a special book.”

Blue Highways spent 42 weeks on The New York Times best-seller list and was featured on the cover of the Times’ book review.  Robert Penn Warren, Pulitzer Prize-winning novelist, and poet described it as “a masterpiece.”

In the years since Blue Highways was initially released, Heat-Moon has published eight other books. They include PrairyErth: A Deep Map; River-Horse: A Voyage Across America; Roads to Quoz: An American Mosey; An Osage Journey to Europe, 1827-1830; Here, There, Elsewhere: Stories from the Road; and Writing Blue Highways.  Celestial Mechanics, his first novel, debuted last year and has drawn abundant praise from reviewers.

That impressive list of successes would make any writer proud.  Heat-Moon, however, is also proud to be a Veteran, noting the frequent encounters in which that status offers a connection with others who served.

“The Navy gave me as much education as all my formal studies,” he said of his service on the aircraft carrier Lake Champlain from 1964-1965.  “I sailed in the Caribbean and visited ports in Europe.  Much of the experience was about learning to work with people.  If I have nothing else in common with another Veteran, we still have our service as a common bond.”

Heat-Moon is aware that his time in the Navy allowed him to seek VA care when his appendix flared up, and he had nowhere else to go.

“I will never forget what VA did for me,” he said.  “Saving one’s life is something not to be forgotten. My thanks seem insufficient.”

Dan Bruneau is managing editor for Digital Media in the VHA Office of Communications. He previously worked as the office’s director of communications management and director of VA Research and Development Communications.  Bruneau will retire Dec. 31 after nearly 25 years of service in VA.