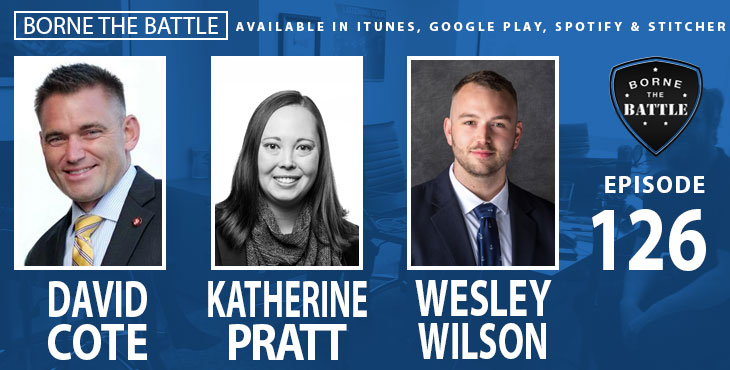 Each year, Student Veterans of America selects a “Student Veteran of the Year.” They receive hundreds of submissions for consideration and narrow the field down to ten finalists. Year after year, these ten finalists prove to be exceptional individuals. I had the opportunity to sit down with the finalists this year and talk to them about the success they’ve had with their respective chapters and on their campuses. Today’s group of student Veterans include David Cote, Katherine Pratt, and Wesley Wilson.

David J. Cote is a Major in the United States Marine Corps Reserves. In the Active Component, he most recently served as an Operations Research Analyst in the Pentagon helping the Marine Corps make resource allocation decisions.  In the Reserve Component, he serves as a Regimental Staff Officer of a 4000+ member Reserve Infantry Regiment.  He is currently earning a Master in Business Administration at Boston College (MBA ’19).

Katherine Pratt received her B.S. in aerospace engineering from MIT in 2008, where she received the MIT Women’s League Laya Weisner Award for public service to the university, and the MIT Aero/Astro James Means Memorial Award for Space Systems Engineering.  She completed several internships with the private space venture Blue Origin, working in systems and propulsion engineering. After graduation, she served four years in the United States Air Force, working primarily as an operational flight test engineer on the F-35 Joint Strike Fighter.  She is now a PhD Candidate in the BioRobotics Lab in the Electrical Engineering department of the University of Washington. Her work focuses on the privacy, ethics, and policy of neural data. She is the recipient of a National Science Foundation Graduate Research Fellowship and has interned with the ACLU of Washington through the Speech, Privacy, and Technology Project.  She has just completed a six month internship as a Congressional Innovation Fellow through Tech Congress, where she worked in the office of Congresswoman Suzan DelBene to advise and craft technology policy and legislation.

Wesley Wilson is from Lexington, South Carolina and enlisted in the United States Army in pursuit of a better education after negotiating the inner-workings of the South Carolina foster care system. Wesley served from 2012-2017 as a Military Police Officer in positions of team leader, squad leader, and operations manager. While in the service, he earned an associates degree from American Military University—graduating with honors. Wesley left the Army in 2017 and was accepted to Fordham University where he is currently a senior studying Organizational Leadership.

The full transcript to this episode can be found here.