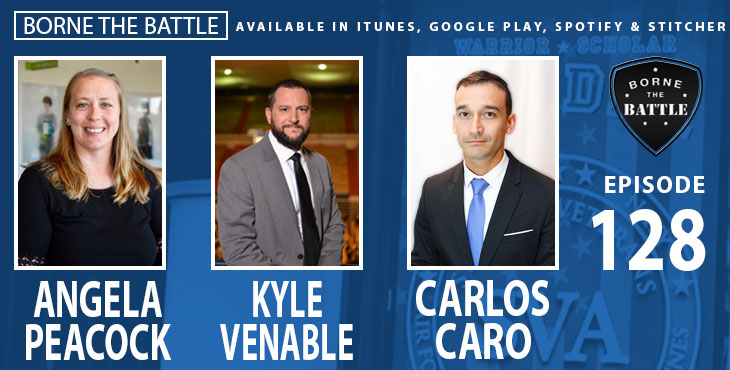 Today, we continue our discussions with Student Veterans of America’s Student Veteran of the Year finalists. This episode features Angela Peacock, Kyle Venable, and Carlos Caro. We learn about their chapter’s success in 2018, their philosophy on outreach, and how to include other military personnel on campus.

Angela Peacock enlisted in the Army and served almost seven years and deployed to Baghdad during Operation Iraqi Freedom. After surviving a near-death illness and driving dozens of convoys in hostile areas, she was medically retired. Her transition was devastating. Ultimately, she found healing in alternative therapies and service to others.

Angela founded the St. Charles Community College Student Veterans of America chapter and has remained in student veteran leadership roles from 2011 to the present. She was the first veteran since WWII to be admitted to Phi Beta Kappa at Washington University in St. Louis and was awarded the George C. Lang Courage Award from Wounded Warrior Project. In addition to being a peer mentor to other veterans, her advocacy changed a state law to help service dog owners with invisible disabilities.

Currently pursuing her master’s in social work at Washington University, she is the President of WUVets, which was awarded Chapter of the Year in 2016. This past year, Angela coordinated Student Veterans Week and brought together five area universities for a week of events that included networking and LinkedIn training, a mental health panel, and a film screening. She engaged over 300 members of the community and veterans alike, highlighting the strengths of the student veteran population in St. Louis. She is currently a member of the Missouri Veterans’ Innovation Task Force and is a leader in the St. Louis veterans’ community who is often sought out for resources to help others or to to speak nationally on topics affecting veterans including trauma, suicide and thriving after service.

Kyle Venable served in the Marine Corps as a Private to Gunnery Sergeant from July 25, 1994 through February 23, 2013. He served as a Maintenance Management Clerk before retraining as a Communications Electronics Maintenance Technician. Serving in a myriad of billets, he deployed multiple times to both Iraq and Afghanistan in the Global War on Terror. During his career, he earned many awards including the Navy and Marine Corps Commendation Medal, Navy and Marine Corps Achievement Medal and the Outstanding Volunteer Service Medal. After the Marine Corps, Kyle continued to serve in the federal government as a Civil Service worker aboard Camp Lejeune from February 2013 to August 2015. In August 2015, he decided to continue his education at Coastal Carolina Community College before transferring to Auburn University in August 2016. In April 2017, Kyle was elected to his first term as President of the Auburn Student Veterans Association. Now in his second and final term, Kyle will graduate in May 2019 with a Bachelor’s of Science in Business Administration majoring in Information Systems Management. After graduation, Kyle plans to continue to serve the Student Veteran population of Auburn University by working in the schools Veterans Resource Center.

I am Carlos Caro from Phoenix, Arizona. I served in the United States Navy from March 23 2010 to June 22 2015. My time in consisted of sailing aboard USS Peleliu LHA-5. I completed three deployments while reaching the rank of Operations Specialist Second Class Petty Officer with both surface and air warfare qualifications. After leaving the navy I sailed with the United States Merchant Marine as an able-bodied seaman and kept my navy status as a reservist.

I attended my first new student conference as a student veteran on July 2015 at Texas A&M University Galveston Campus where I am currently enrolled and a proud member of the Texas A&M Maritime Academy Corps of Cadets. I am majoring in Marine Transportation with a minor in Military studies. Upon graduation in May and the completion of my third mate’s license examination, I will be receiving a commission in the United States Navy Reserve as an Ensign and endorsed as a Third Mate of Unlimited Tonnage in the United States Merchant Marine. I plan on sailing on coastwise tankers and my goal is to captain my own ship.

The full transcript to this episode can be found here.