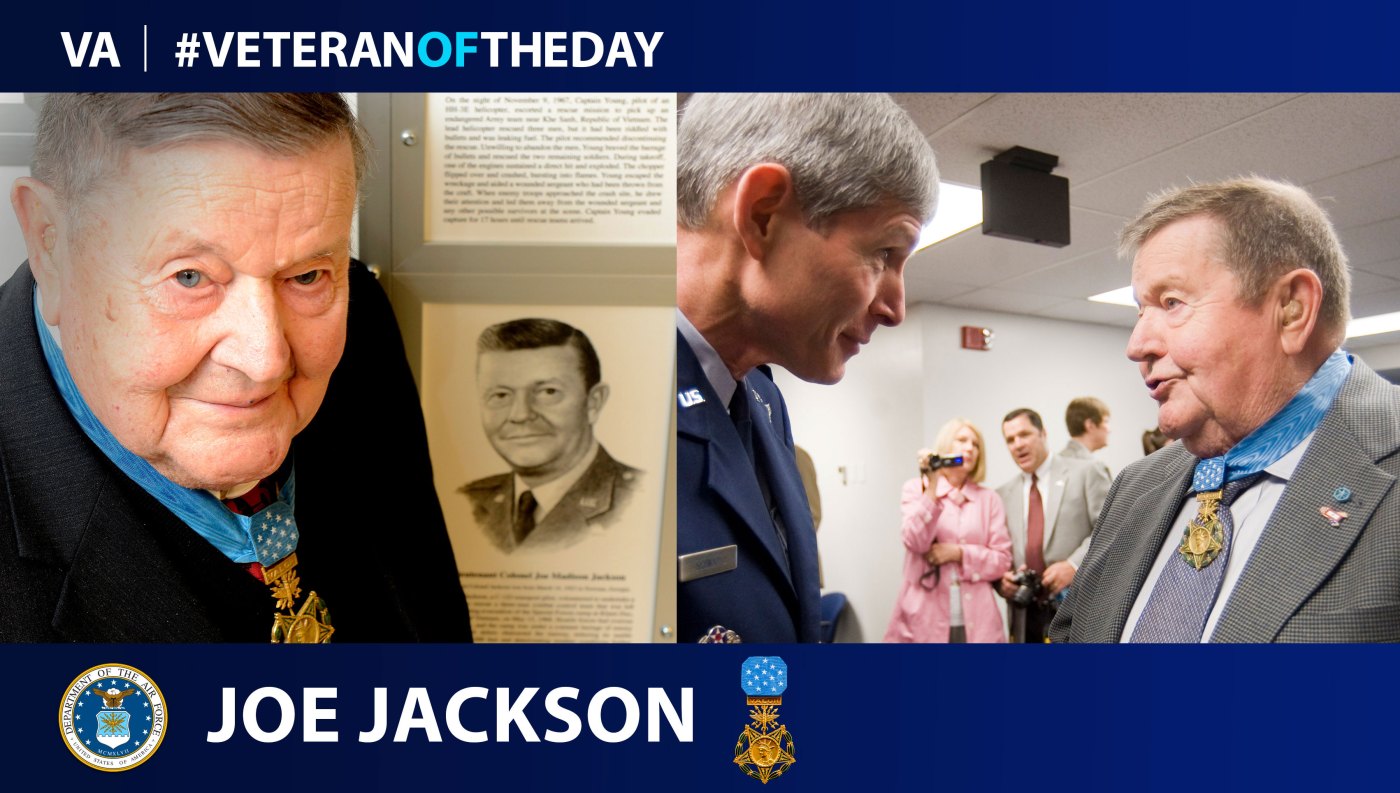 In March 1941, Georgia native Joe Jackson enlisted with the Army Air Corps to pursue a career as an air mechanic. He received basic training at Orlando Army Airfield, Florida and was then stationed at Westover Air Force Base, Massachusetts.

In early 1942, while stationed at Westover Air Force Base, Joe was asked by one of his fellow airmen if he could serve as the flight engineer on an anti-submarine patrol. While on patrol, one of the engines on Joe’s B-25 caught fire. Joe successfully instructed the pilot on how to put out the fire, saving the lives of all on board. That day, Joe decided he wanted to become a pilot, and in Sept. 1942, Joe began aviation cadet training.

After earning his wings in April 1943, Joe was assigned to Eglin Field, Florida where he trained fighter pilots in gunnery for the remainder of the war. After the end of World War II, Joe remained enlisted with the Air Force, and served his first combat tours during the Korean War.

In Jan. 1951, during their first days in Korea, Joe and his squadron of four F-84 fighter jets were tasked with bombing an enemy train. While preparing to engage the target, Joe and his squadron encountered a group of 16 enemy MIG-15 jet fighters. Despite the superiority of the MIG-15 squadron, Joe and his fellow airmen successfully evaded the enemy attack without taking casualties. Over the course of the Korean War, Joe flew 107 missions in his F-84, escorting bombers, providing close air support and engaging in air to air combat.

Joe continued to serve after the Korean War, and in 1956 became a supervisor in the top-secret U-2 global reconnaissance program.

In 1968, Joe was assigned to Vietnam, where he served as a C-123 pilot with the 311th Air Commandoes Squadron at Da Nang Air Force Base. There, he was responsible primarily for transporting cargo to the 1st Marine Division.

In the afternoon of May 12, 1968, after flying a routine supply mission from Da Nang to Chu Lai, Joe was called to report for a special mission. In the previous two days, a superior North Vietnamese force had begun to overrun a special forces camp at Kam Duc. The men had become surrounded and heavy enemy anti-aircraft fire complicated an air evacuation. Over a dozen friendly aircraft had already been lost in rescue efforts. Joe and his squadron were assigned to coordinate with a team of fighters and C-130s to rescue the survivors.

After Joe’s fellow airmen believed they had rescued the remaining survivors, they prepared to bomb the area. However, they were then informed a three-man combat control team remained in the base. Under intense enemy fire and adverse conditions, Joe carried out a daring maneuver to land his C-123 in the camp. As the men ran to board the aircraft, a 122-millimeter rocket was fired at them. The men watched as the rocket hit the ground and skidded towards their plane, landing right at the nose, but failing to detonate. As Joe and his fellow airmen took off with the three survivors, they took heavy small arms fire and narrowly avoided mortar fire. As a result of their actions, Joe and his crew successfully rescued the three combat controllers. For his exceptional actions on that day, Joe received the Medal of Honor, which was presented to him by President Lyndon B. Johnson on Jan. 6, 1969.

By the end of the Vietnam War, Joe had flown 298 missions. After serving in Vietnam, Joe served as a faculty member at the Air War College in Montgomery, Alabama, before retiring from the United States Air Force in 1974 at the rank of colonel.