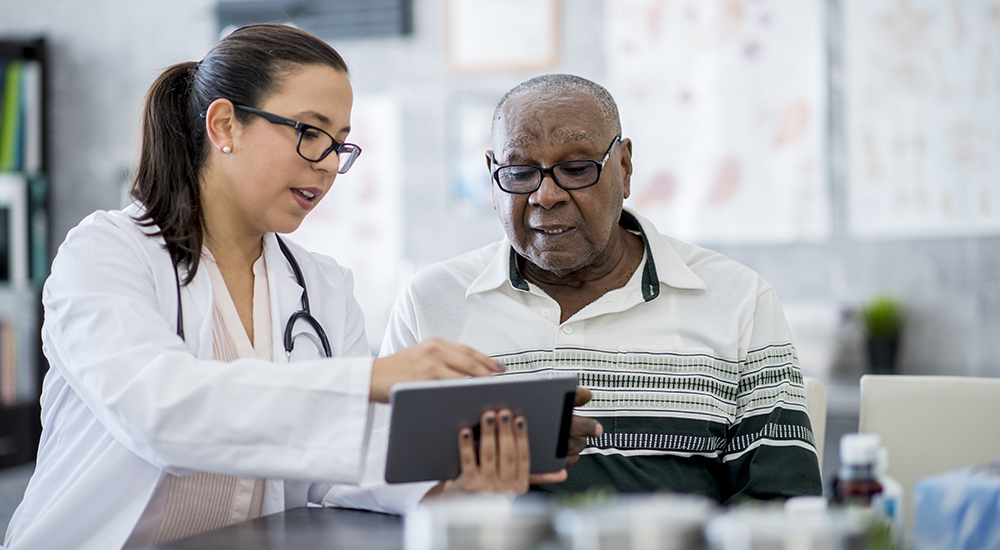 As one who wore the uniform of the U.S. Marine Corps for 22 years, serving in World War II and the Korean War, Henry Holley subscribed to the Marines’ Latin motto: Semper Fidelis “always faithful, always loyal.”

Today, Holley is quick to apply that tag to VA. He believes the VA health care system has been incredibly faithful to him in the three years he’s been a patient of the geriatric clinic at the Atlanta VA Medical Center. The 91-year-old Veteran has serious back and knee pain stemming from his military service that hampers his ability to walk.

“I can’t get over how committed and qualified they are.”

“Every need I’ve had, they’re right on the spot helping me,” he says. “I just can’t get over the service and how wonderful and committed and qualified they are. They bend over backward to help me. I’m so grateful.”

Dr. Rina Eisenstein (left) a primary care physician on the GeriPACT team at the Atlanta VA, talks with patient Henry Holley, who served in the Marines. With them is nurse care manager Cathy Woods. (Photo by Joey Rodgers)

Holley is one of some 1,500 patients enrolled in the geriatric clinic at the Atlanta VA, which formed one of the first dedicated geriatric clinics in VA. The clinic, which transitioned in 2011 to the Geriatric Patient Aligned Care Team (GeriPACT) model, serves a patient population with an average age of 86.

The GeriPACT team has provided Holley with support in geriatric primary care, pharmacy, nursing, mental health care, and social work, and it has referred him to other departments for optical and dermatology services. The Atlanta VA has also arranged to get him a walker and a scooter, as well as a chair lift, a physical therapist, and a caregiver for use in his home.

“I even get valet parking at the Atlanta VA,” Holley says. “I try to tip the boys, but they won’t take anything.”

A team of VA researchers recently described the implementation of VA’s GeriPACT model in an article in the Journal of the American Board of Family Medicine.

GeriPACTs are like a one-stop shop. They combine traditional health care services with community-based services, featuring doctors, nurses, pharmacists, social workers, and other specialists. The goal is to streamline the health care experience of Veterans with geriatric needs and expedite their visits to a VA facility, rather than requiring them to set up multiple appointments with providers.

The researchers write: “GeriPACT is one approach for bringing an interdisciplinary, patient-centered perspective to primary care in a manner that can likely [justify] the higher staffing costs,” with less reliance on placing people in long-term care institutions. “It is a model which can provide training for the next generation of providers and clinicians.”

In 2015, about 60,000 patients received GeriPACT services, out of the 1.5 million Veterans at least 65 years in age who were enrolled in the VA system. The model is currently in place at dozens of VA medical centers, but not all.

Watch this 2015 VHA video for a close-up look at a GeriPACT in action.

In addition to the elderly, GeriPACTs treat younger patients with geriatric-type needs. Dr. Rina Eisenstein, a primary care physician with the Atlanta GeriPACT, says one of her patients is a 59-year-old Veteran with early-onset Alzheimer’s disease. “These types of patients are no way geriatric age, but they are geriatric-appropriate because of their inability to function,” she says.

With the Veteran population not getting any younger, Eisenstein hopes GeriPACTs will eventually be in place at all VA medical centers.

“We have a lot of Vietnam War Veterans who are getting older and had possible exposure to Agent Orange,” Eisenstein says, pointing out that such exposures can lead to numerous medical problems. “Those patients are very difficult to care for, but GeriPACTs are very well-equipped to provide care for them.”