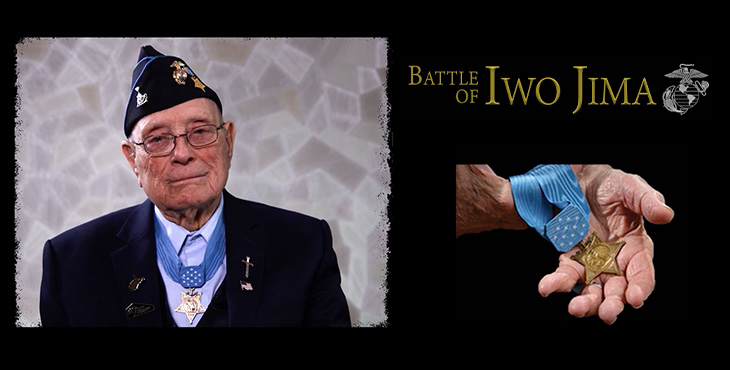 The Battle of Iwo Jima began on Feb. 19, 1945, as thousands of Marines landed on a beach of volcanic ash in the Pacific. For five weeks, Marines, Navy Corpsmen and Seabees fought for control of the heavily-fortified island. Medal of Honor recipient Hershel “Woody” Williams recalls landing and running from impact crater to impact crater as his unit made its way across their first objective on the island.

“Our job was to take the first airfield, secure it, and then keep going North,” he said. “There was no protection on the airfield. All we had were some shell craters.”

When his company commander asked if he could do something about the concrete-fortified pillboxes, Williams “strapped on the flamethrower to go take out some pillboxes.”

Williams took out seven enemy pillboxes with six different flamethrowers as the fighting continued on Iwo Jima. Williams recalled, “If I had an empty flamethrower . . . I probably wouldn’t be talking to you today.”

While he said he doesn’t quite remember how he kept fighting, his actions on Iwo Jima made him a living legend among Marines.

Williams returned home in November 1945 but his service wasn’t over. He had made a pact made with a friend before landing on Iwo Jima, and after his friend was killed in combat, Williams set out to keep his promise… and uphold the Marine Corps motto of Semper Fidelis.

Watch the six-part series above to hear Williams tell this incredible story himself.