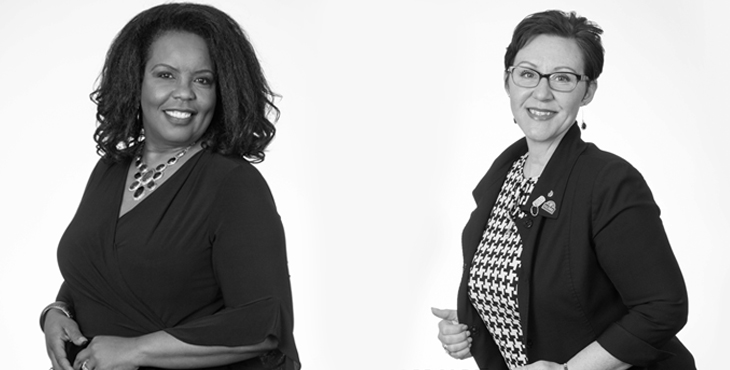 Zorina Pritchett served in the U.S. Army as a Personnel Administration Specialist. She joined the Army to pave a way to attend college and during her service learned many valuable lessons that prepared her for life.  One lesson was the importance of leaving nobody behind. Zorina started her life outside the military at the Department of Veterans Affairs (VA), where she was committed to making sure that no Veteran was left behind.  During this time, she was a single mom finding it difficult to manage her disabilities, perform her job and be a parent. There were many times she felt like giving up, but the love for her son pushed her harder. Zorina currently serves at the VA as Program Analyst, where she continues to help Veterans. Her passion for serving others and enjoyment of performing arts helps her fight through adversities and achieve a satisfying life. She shared a few words to live by, “Never give up the fight to achieve the best version of you.”

Missina Schallus, is a Retired Yeoman Chief Petty Officer, U.S. Navy and a native of Atlantic City, New Jersey. She is fulfilling her passion for continued service, as a VA employee at the Center for Women Veterans. In this role, Missina continues to advocate for and on behalf of women Veterans. Missina’s hope is that is other women Veterans will step out of the shadows and embrace their identify as Veterans and realize how valuable their military contributions are to our nation. Missina is a three-time cancer survivor, who has never lost faith and an avid Philadelphia Eagles fan, but her favorite role is as the mother of three children, whose laughter lifts her soul. Her message to Women Veterans, “the culture is changing” and to all Veterans, “not all wounds are visible, not all Post Traumatic Stress is caused by war, but our wounds bear the same pain. Mental illness must be talked about openly.”

Her favorite quote is, “A smile starts on the lips, a grin spreads to the eyes, a chuckle comes from the belly; but a good laugh bursts forth from the soul, overflows, and bubbles all around.” — Carolyn Birmingham