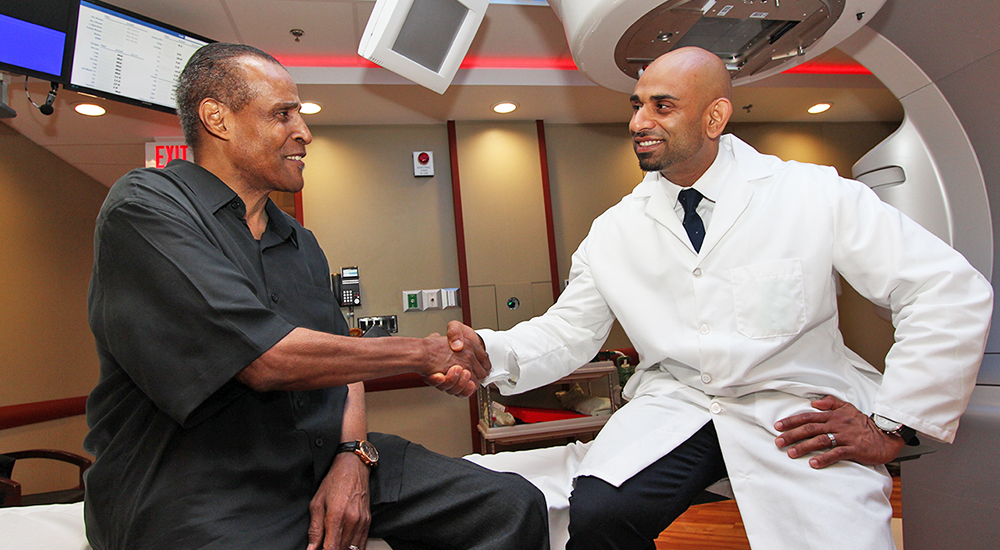 Clarence Massey (above, left) received treatment for his prostate cancer at the Brooklyn campus of the VA NY Harbor Healthcare System. He is with radiation therapist Nader Girgis, who was part of his treatment team.  (Photo by Mitch Mirkin)

As an Air Force mechanic in the 1960s, Clarence Massey worked on bombers and fighter jets in Vietnam.

More than four decades later, in 2010, he became immersed in another battle. The resident of New York City’s historic Harlem neighborhood underwent nine weeks of radiation therapy for prostate cancer.

The treatment itself wasn’t too bad, he recalls, but the side effects hit him “like a ton of bricks,” says Massey, now 72.

Massey’s outcome was a good one. He’s been in remission. He gives credit to his VA doctors, but, he says, “Mostly I give credit to God. I’m blessed.”

In the years since Massey’s bout with cancer, biomedicine has come a long way—especially when it comes to analyzing genes and proteins. VA and two federal partners—the Department of Defense and the National Cancer Institute—are looking to harness the power of this science through an effort dubbed APOLLO, in the spirit of the famous space mission that landed men on the moon. The research program is described in full detail in an article now online in the journal Clinical Pharmacology & Therapeutics.

The project initially launched in 2016 under the federal Cancer Moonshot, a broader effort likewise inspired by the space theme.

It’s all about precision oncology

The full title of APOLLO sounds complex: Applied Proteogenomics Organizational Learning and Outcomes. But the overarching goal is simple: individualize cancer treatment. That’s what “precision oncology” is all about.

“Each patient is unique, and each tumor is unique,” explains Dr. Craig Shriver, one of the architects of APOLLO. He directs the Murtha Cancer Center Research Program in the department of surgery at the Uniformed Services University of the Health Sciences, in Bethesda, Maryland.

APOLLO, he says, is collecting a wide array of data from patients, on a scale that is largely unprecedented in cancer research. The data will be analyzed with the help of sophisticated technology—including artificial intelligence—and scientists worldwide. Ultimately, the findings will be used to determine the best precision treatment for a given patient.

The main beneficiaries in the short term will be Veterans and active-duty troops, as cancer care at VA and military hospitals increasingly incorporates knowledge gained through APOLLO. The knowledge will eventually filter into medical care at large, so cancer patients everywhere can see better treatment.

APOLLO is starting operations at 10 military hospitals and one VA site (Palo Alto), with additional VA sites likely to be on board by late 2019. There is also one civilian hospital involved, Anne Arundel Medical Center in Maryland. Cancer patients at these facilities can agree to have their information—including molecular results from their tumors—added to the growing APOLLO research database. All information is coded, so patients are not personally identifiable to researchers. The enrollment target is 8,000 patients over five years.

The effort will work hand in hand with VA’s Precision Oncology Program. Through POP, increasing numbers of VA patients with cancer are having their tumors genetically analyzed, so their physicians can prescribe more targeted therapies, or so they can be referred to appropriate clinical trials.

Vietnam Veteran Clarence Massey is thankful his battle with cancer is long behind him. For others his age and younger who are destined to face a similar challenge, APOLLO and its deep dive into the science of cancer is likely to mean better treatment, and added years of life.

To read a longer version of this article, visit VA Research Currents.

“The Science of Hope”

VA Research Week gives VA medical centers an opportunity to showcase the numerous achievements of VA researchers and the role they play in providing high-quality care for Veterans and advancing medical science. Creative displays, staff interactions, and informative seminars help educate Veterans, our elected representatives, and others about VA research and its impact on treating and preventing disease and disability, not only for Veterans but all Americans.