Home / Health / Break a board, help a Veteran

Break a board, help a Veteran 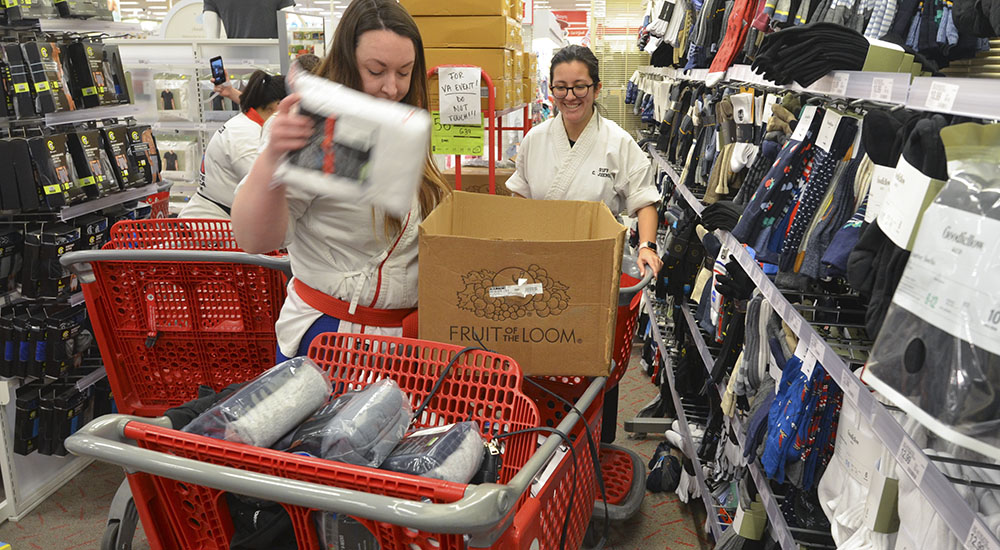 Instructors, staff, and students from Karate America took part in the shopping spree that benefited Veterans at the Milwaukee VA.

The board-breaking folks at Karate America used their hearts as well as their hands to make a difference for thousands of Milwaukee-area Veterans.

Instructors, staff, and students from three area Karate America studios, along with employees from the Milwaukee VA Medical Center, went on a $19,000 shopping spree at the Target store in West Allis, Wis., to purchase needed items for Veterans.

“This is amazing,” said Milwaukee VA Assistant Medical Director Christina Orr as she filled a cart with men’s sneakers. “For the Veterans, we’re clearing our list. I don’t know when we’ve ever done that in one day and we’re very appreciative to the Karate America group.”

Many of the items were earmarked for Veterans in the HUD-VASH program, which helps homeless Veterans and their families find and sustain permanent housing. Others were destined for Veterans at area VA clinics.

Money for the shopping spree was raised earlier in the year at “Knock Out the Wish List” board-breaking marathons in the nearby communities of Brookfield, Pewaukee and Menomonee Falls. Participants could break a board for a $10 donation, with all money going to the Milwaukee VA. The event surpassed its original goal of $15,000.

Purchased items were checked off against the Milwaukee VA Wish List

The marathons came about because family members of a VA employee took lessons at Karate America. That connection led to the Wish List, said Kyle Mealy, a chief instructor at the Brookfield school and primary organizer of the events.

“I knew our fundraiser was going to bring in a lot more, especially for Veterans, than just socks,” Mealy said. “So, what can we do? And then we realized that financially we could probably do the whole thing, so that’s what we did.”

The dominoes of success continued to fall into place when Mealy reached out to Antonija Nekich, an executive team leader in human resources at Target.

“My husband’s grandfather actually passed away at VA the weekend before I got the call from them,” Nekich said. “What a great way to honor him and the Veterans in our country. It is a great day. How can you not smile on a day like today?”

Veteran (83) (and Target Employee) pitched in

Among those helping the shoppers navigate the aisles was Clifford Wallenfang, an 83-year-old Air Force Veteran who works at Target and gets care at the Milwaukee VA.

“This was good, this was exciting. I’m pleased with what they did for the Veterans,” said Wallenfang. “I was in the hospital here for 13 weeks a year and a half ago. I use them for everything I need.”

“We’ve done fundraisers, but never anything to this level,” Quirk said. “From my own personal story, my dad counts on the VA. He was in Vietnam, First Battalion, Third Marines. He is dependent on the VA and you guys take such good care of him. When I heard that these guys set it up with the VA, it floored me.”

As the Wish List items were scanned at the registers, multiple receipts were taped together, eventually totaling more than 20 feet of difference-making. The purchases were loaded into Karate America vans, which caravanned to the Milwaukee VA.

Dan Zomchek, director of the medical center, participated in the board-breaking event in March and greeted the participants at the loading dock.

“Over $19,000 of supplies and equipment and clothing, this is unprecedented,” Zomchek said. “I’ve never seen one organization in one fell swoop eliminate our entire Wish List.”

Jim Hoehn, is a Public Affairs Specialist, at the Milwaukee VA Medical Center