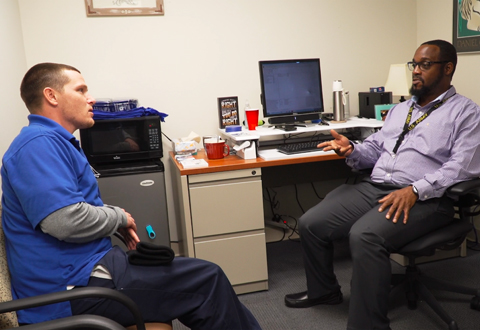 When faced with challenges in life, one of the most difficult steps can be asking for help. It’s not easy to share your struggles and it can be particularly difficult if your challenge is marked with a stigma like drug addiction.

As the Peer Support Specialist in the Substance Treatment and Recovery (STAR) program at the Ralph H. Johnson VA Medical Center, Tyrone Jarmon works with Veterans to overcome their addictions. Jarmon offers a unique perspective on their recovery because he’s been there–multiple treatment programs, strained relationships, lost jobs and rock bottom.

“When I got out of the Army, I was successful,” said Jarmon. “I had good jobs in telecommunications and I made good money. There is never just one type of person who has substance abuse problems.”

Jarmon struggled with alcoholism and cocaine use.

“When I first went into treatment… my attitude about it wasn’t very good,” Jarmon said. “They said I needed to go to treatment for a while, so I said, ‘Oh I’ll go.’ I kind of looked at it like a joke almost.”

Jarmon recalls his alcohol and drug use started slow casual, and then spiraling out of control.

After several rounds of treatment, Jarmon ended up in a shelter in Raleigh, North Carolina, with only $5 and a tank of gas to his name. That was his rock bottom.

“When I got there, I was ready to do anything at that point. It wasn’t a joke anymore.”

Reality hit him hard, but he eventually made the decision to move forward, to ask for the help he knew he needed and to not look back. The Durham VA Medical Center referred Jarmon to treatment at the Asheville VAMC. This was his first time getting substance abuse treatment at VA.

“What I learned in that program is that there were a lot of things I hadn’t worked on before,” said Jarmon. “It wasn’t just about me and the alcohol and the drugs, it was about a lot of the underlying things that were going on in my life–my anxiety and some self-esteem issues and some things that weren’t dealt with from my military career.”

The whole-health approach was something Jarmon had never experienced in treatment before, and it helped lay the foundation for what is now a decade of sobriety.

Jarmon understands the effectiveness of treating multiple issues along with substance use, and he brings that experience and approach to the STAR program at the Charleston VAMC.

“In the STAR program, we help Veterans who have substance use issues and other underlying issues. We have a well-rounded team to help them with any mental health issues they may be having. It’s basically a one-stop shop.”

Within the STAR program, Jarmon’s main job is to model recovery for other Veterans. It seems simple, but sharing his deeply personal story and demonstrating that recovery is possible for Veterans in the program gives Veterans a face, and a friend, they can relate to. Sharing with someone who has overcome similar struggles can remove the stigma and make it less daunting to ask for help.

Jarmon works with Veterans on step-by-step goal planning, and then connects them with community resources to give them ideas about some things that work for recovery. They also discuss overall wellness and recreation activities.

The STAR program’s treatment approach has changed over the years.

“[The program’s] a little different than it was at first,” said Jarmon. “Instead of us just sitting around talking about substances, we talk about how not to get to that point. It’s not always about the substances–that’s the end symptom.”

How did the Veterans get to the point of abusing substances? That’s what the collaborative care team focuses on. Jarmon works alongside social workers, psychologists and psychiatrists–each is invested in helping the Veterans get back on their feet.

“I get just as much, or more, [out of the program] than the Veterans do with this job because I get to give back,” said Jarmon. “I get to help guys move forward in their life and get some of the things that they need out of life. I know how it is.

“There are a lot of guys who have been through this program and they are very successful. They’ll come in with their families and you’ll see them with their kids. That’s the pay off.”

Going through treatment with other Veterans, and with a team of specialists who are trained to treat Veterans, helps patients achieve success in the STAR program.

“The STAR program isn’t about giving Veterans something they didn’t have before, it’s about reconnecting Veterans with who they are,” said Jarmon.