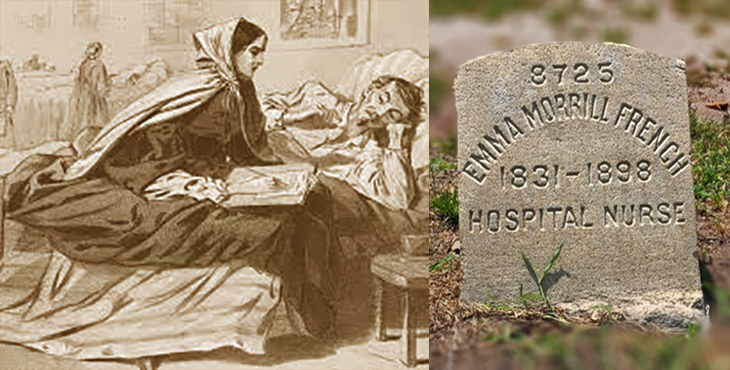 In section 42 of Beaufort National Cemetery is a modest private marker for Emma Morrill Fogg French. In addition to her name and years of birth and death—1831-1898—is the simple inscription “Hospital Nurse.”

Emma (or Emeline) M. Morrill was born in 1831 in Standstead, Canada, along the United States border in Vermont. It is likely that her family lived on both sides of the border over the next two decades. Emma was residing in Lowell, Massachusetts, when she married distiller Charles P. Fogg on March 1, 1852. There is little historical evidence of the Foggs after their marriage. Charles appears in the 1855 New York census as a boarder in Brooklyn. Emma shows up on the 1860 U.S. census without Charles, presumably having been widowed by that time. She too was living in Brooklyn.

Emma arrived in the Sea Islands of South Carolina in 1863 to serve as a nurse for the Union Army at the U.S. General Hospital in Hilton Head. While her time in service was relatively short—from March to October—she apparently made quite an impact on the soldiers under her care. A notice in the November 14, 1863, edition of The New South newspaper, noted that Mrs. Fogg received “an elegant Gold Pen and Pencil” from several of the wounded soldiers.

Newspaper clipping on her departure from the hospital.

Emma returned to New York but came back to teach in South Carolina for the National Freedman’s Relief Association in April or May 1864. The Association was formed in February 1862 at the Cooper Union Institute to “relieve the sufferings of the freedmen, their women and children, as they come within our army lines.” Rev. Mansfield French, a minister in the Methodist Episcopal Church, who had initially become interested in the education of African Americans in Ohio in the 1850s, was one of the main forces behind the organization. After the start of the Civil War, Reverend French went to Washington, D.C., and in a meeting with President Lincoln convinced him of the need to care for the enslaved African Americans who had been abandoned on the plantations of Hilton Head and Port Royal, South Carolina. The reverend was eventually commissioned as a chaplain in the U.S. Army and assigned to the U.S. hospital in Beaufort. An avid abolitionist, Reverend French continued to advocate for both the end of slavery and the recruitment of former enslaved men into the Union Army.

Emma remained in costal South Carolina after the war and continued teaching with the Bureau of Refugees, Freedmen, and Abandoned Lands (the Freedmen’s Bureau). In April 1868, she married the eldest son of Reverend French – Winchell Mansfield French, who had joined his father in Beaufort in 1864 and became involved in land and cotton speculation. The couple reportedly resided at the former Thomas Fuller House on Bay Street in Beaufort. The house—later referred to as the Tabby Manse—was purchased by Reverend French in January 1864 at public auction, having been abandoned by its owners.

The Frenches lived in Beaufort through at least June 1880 when the U.S. population census was taken. Winchell, who was engaged in numerous business pursuits during the Civil War and after, was by this time the editor of a local newspaper. Living with the couple were several boarders including two families and a single young man.

By 1885, Emma and Winchell had moved to Orlando, Florida, and were running a hotel. Within a decade, the couple had departed the Sunshine State for Chattanooga, Tennessee. This is where Emma filed her pension application related to her service in the Civil War. Nurses were finally granted the right to pensions when the U.S. Congress passed the act of August 5, 1892.

At the time of her death on July 18, 1898, Emma was receiving twelve dollars per month from the federal government—the amount allocated in the 1892 pension act. She was interred at Beaufort National Cemetery among the soldiers she served.

In addition to Emma, there are other notable Civil War nurse buried in the national cemeteries—at Annapolis National Cemetery are three nurses who died during the war: Mrs. J. Broad, Mary J. Dukeshire and Hannah Henderson; and Malinda M. Moon, who died in 1926, is interred at Springfield National Cemetery.