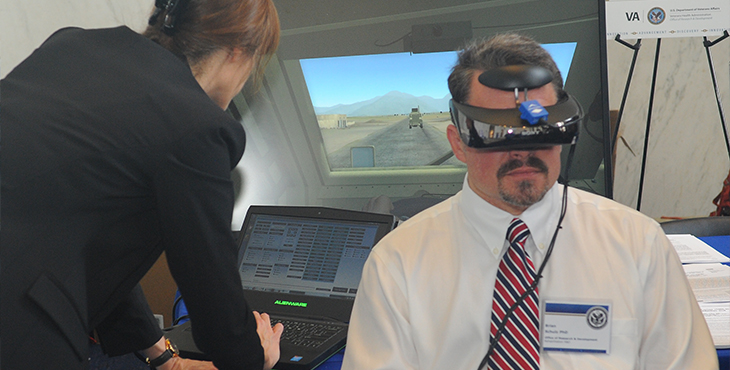 Above: One brain-stimulation study at the Providence VA is testing the effectiveness of combining transcranial direct current stimulation with virtual reality, a form of prolonged exposure therapy, as a treatment for Veterans with chronic PTSD. In the photo, taken at a VA research exhibit on Capitol Hill in June 2019, a VA staffer tries on a virtual reality headset. (Photo by Robert Williams)

A VA study found that a form of brain stimulation that can rapidly improve communication between neurons in the brain helped ease PTSD symptoms.

The findings appeared online June 24, 2019, in the American Journal of Psychiatry.

Theta-burst stimulation can be intermittent or continuous. In this case, the scientists applied it intermittently, or with breaks in the process. Doing so increases the likelihood that the neurons will be more active and will thus communicate with one another, which can potentially reduce PTSD symptoms.

The results showed that intermittent theta-burst stimulation (iTBS) “appears to be a promising new treatment for PTSD,” the researchers write. “Most clinical improvements from stimulation occurred [in the first week], which suggests a need for further investigation of optimal iTBS time course and duration.”

Dr. Noah Philip, a psychiatrist at the Providence VA Medical Center, led the study. He says this is the first time iTBS has been used on patients with PTSD. He hopes the technology will eventually replace transcranial magnetic stimulation, one of the most widely used forms of brain stimulation. A session with TMS takes about 45 minutes, compared with about 10 minutes for a theta-burst session.

A study published last year in the British journal The Lancet showed that a form of iTBS similar to the one used by Philip was just as good as standard transcranial magnetic stimulation for treating depression. The U.S. Food and Drug Administration has approved iTBS for patients with treatment-resistant depression. But the technology is only in the testing phase for treating PTSD.

“There’s some reason to think that the frequency of the theta burst stimulation may be better for people who are suffering from PTSD.”

“My interest is in Veterans with PTSD,” says Philip, who is also an associate professor at Brown University. “The Lancet study took a slightly different approach. But there’s an emerging consensus that these second-generation brain stimulation techniques like theta burst will replace what we currently have.”

In the VA study, the researchers determined after an initial 10-day treatment period that compared with sham, active iTBS “significantly improved” social and occupational function. They also found that reductions in feelings of depression and PTSD symptoms were better with active stimulation than with sham. But improvements in both categories fell short of “significant.”

“People really liked the iTBS,” Philip says. “When they got better, it was a very clear improvement. People would come to the clinic and say, `Hey, I went on a date for the first time in many years’ or `I went out with my wife or was able to go shopping.’ That occurred pretty early on near the two-week mark. Then slowly over the rest of the study we saw other positive signs. That was really nice to see.”

The researchers then offered another 10 days of unblinded iTBS treatment to all 50 participants, with the results again showing that real stimulation was better than placebo in easing depression and core PTSD symptoms and improving social and occupational function. “We had what we would call statistically significant and clinically meaningful improvement in most of the things we were looking at,” Philip says. “We also found that real stimulation reduced anger significantly in these Veterans, which we weren’t expecting.”

The side effects from iTBS, Philips notes, were consistent with those of standard transcranial magnetic stimulation. The participants felt a little bit of pain when the procedure started, sort of like a tapping or stinging sensation, and some experienced minor headaches during the stimulation period, he says. He knew of no long-term negative effects from the intermittent theta burst stimulation.

He and his team are now reviewing data to see how the Veterans are faring with their symptoms one year after receiving iTBS treatment.

Among other research, Philip’s group is also testing a combination of transcranial direct current stimulation with virtual reality, a form of prolonged exposure therapy, as a treatment for Veterans with chronic PTSD. With tDCS, a small amount of electrical current is applied to the scalp via two or more electrodes. Positive and negative currents are transmitted to the brain, making brain cells more likely or less likely to be active.