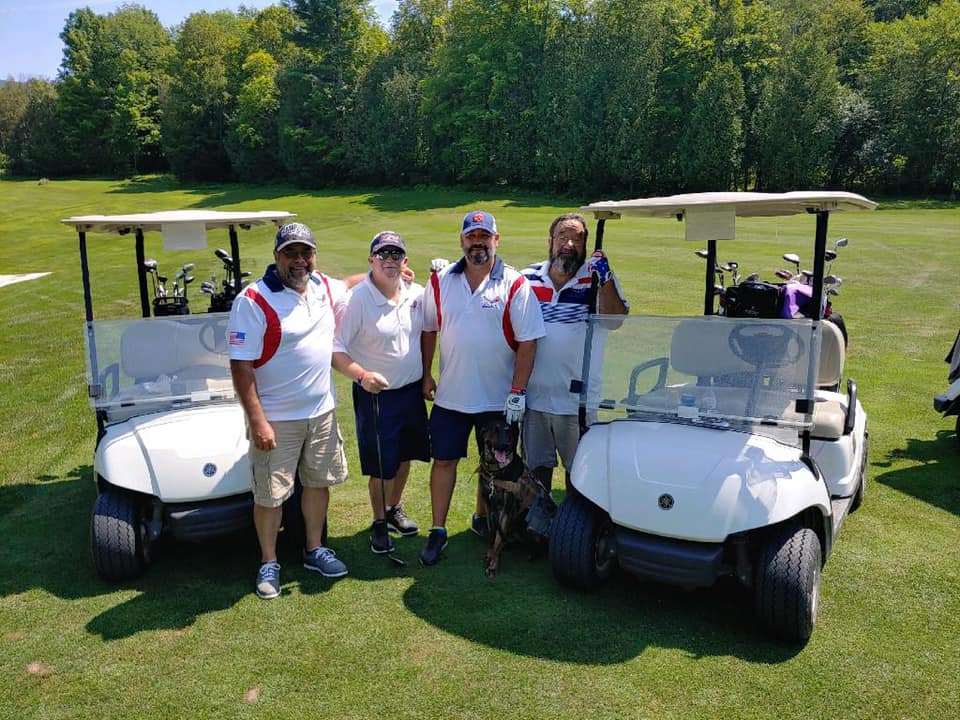 “Golf is a stupid game. The closest I came to a golf course was when we took our two boys miniature golfing.”

He’ll join about 260 other Veterans with blindness, amputations, paralysis, post-traumatic stress and other disabilities at the 26th annual event, hosted by the Iowa VA Health Care System and cosponsored by Veterans Affairs and Disabled American Veterans.

Besides taking clinics and learning how to golf, they’ll break into teams for an actual tournament, and take part in educational workshops and other outdoor recreation therapy, such as kayaking, fishing, horseback riding and more.

The goal, said DAV National Commander Stephen “Butch” Whitehead, is to change lives beyond the week in Iowa.

“One of our main goals for the TEE Tournament is for participants to be impacted by this event for a lifetime,” said Whitehead. “We want to introduce them to new opportunities and give them a chance to prove to themselves that their disabilities do not have to limit their quality of life.”

We caught up with Glynn and a couple other Army Veterans planning to attend this year’s event to find out what makes it so special, and yes, even answer that question that’s been on your mind.

No sight needed: “I just wail away”

So how does a blind guy who never golfed when he could see, actually golf now that he can’t?

“Well, that just kind of depends,” Glynn said with a chuckle. “There are some golfers who have played golf before and so they have been able to see and hit the ball and they just kind of transferred those muscle memory skills.

“Literally, I’m wailing,” he said. “For someone who has played before, they usually always hit it. For me, for as many times as I make contact, I miss. I may go over the ball or shorten my swing, but every now and then, when I make a good solid connection, you know by the sound and the feel, and I go, ‘Oh, that was good.’

Glynn said he only decided to go to his first event because he was tired of the blind rehabilitation therapist at the VA Central Iowa Health Care System from bugging him to go. Now, the guy who never golfed without a windmill in front of a hole said he was hooked after that first time. He brought home a set of donated clubs and has upgraded his drivers and irons since then.

“I actually look forward to it every year. It gives me an additional outlet. I’m meeting people, socializing with folks. You meet new people, it’s Veterans playing cards, shooting the breeze. It shows you that you aren’t alone, and you learn how to cope by talking to others going through it.”

Larry Seacat found golf to be a great new way to exercise after several health crises.

Vietnam Veteran Larry Seacat has had a score of health issues that might keep a lesser man on the couch and catching up on Judge Judy verdicts.

His family had other plans.

“I had already had open heart surgery when my youngest son was taking golf in school. He said, ‘Dad, you need to exercise. Will you get out and play with me?’ And from that second game, I was hooked. I love every minute of it now and get out and play every chance I get.”

This will be Seacat’s sixth year at TEE. His team has won the overall tournament three times in the last five years, and he’s looking to add a fourth.

“I like getting out there to meet the people and make a lot of new friends, but I’m very competitive. It’s fun and all, but I play to win.”

But for him, there’s another purpose.

“It just feels good to exercise. I meet a lot of guys who are legally blind, just like I am. Matter of fact, six of us are going from our blind rehab school. I can see right in front of me, but can’t see side to side or up and down. But you know, I feel really fortunate, because there are gentlemen and women who are worse off than I am. I just feel fortunate that I even get to play in this game. Some are worse than me, and a lot of them are much better players than me.”

Seacat said his biggest cheerleader — the one who makes him get off his butt — is the person he’s been married to for 48 years.

“I tell you what, Patty is as wonderful as they come. If I’m late on my medicine, she comes in and gives me a good chewing out. She is a really good watch dog. And when I go to Iowa, she’s my golf buddy.”

And he credits his medical team at the Louisville VA Medical Center with the opportunities.

“I love to hunt, I love to fish. I take advantage of every chance they give me. If VA comes up with something that I can be competitive in, I’m all in. I would be nowhere near where I am today if it were not for VA. VA has done wonders for me.”

“The stuff doesn’t go away, but you’re distracted in a positive way”

Shannon Blake was a Huey helicopter pilot who served 20 years in the Army. He said he went through a rough time after retirement, but found healing in golf and other recreation therapy.

It was a windy day on Malletts Bay in Lake Champlain.

In short, the perfect day for what Shannon Blake planned, taking other disabled Vets out on the water as part of his nonprofit group, Warrior’s Soar, along with his dog, “Freedom.”

Nobody has to convince this former Huey helicopter pilot that recreation therapy can help heal wounds physical and unseen. He’s experienced it himself and is paying it forward.

Blake, who gets care at White River Junction VA Medical Center, retired from the Army in 2006, and went through “three or four years of tough times,” before coming around to adaptive sports.

“I’ve lost buddies in combat and to suicide,” he said. “I found this was a good outlet to help me, that just playing golf was kind of a way to deal with my anxiety and PTSD and all the mental stuff. I enjoy being outside and being around with other Veterans. It makes it more comfortable to discuss things and it’s a way to manage life’s obstacles.

“You know, the stuff doesn’t go away, but you are distracted in a positive way and that’s healthy, and it’s something you can continue when you leave the TEE Tournament.”

Shannon Blake takes disabled Veterans on the water as part of his Warriors SOAR outreach group.

In 2017, he started Warriors SOAR — Support, Outreach, Assistance and Recovery — as a way to help his fellow Veterans heal. The Vermont-based program takes Veterans golfing, sailing, snowshoeing, kayaking and even to a Boston baseball fantasy camp in Florida.

“It’s a total lifesaver,” he said. “I knew it would work because I had already been fundraising for other Veteran groups and adaptive sports because those programs helped me get out of the shadows and off the couch.”

This will be his third year at the TEE Tournament. And even if someone doesn’t like golf, he still has advice for those still struggling.

“Find something to focus on. Find something small and just continue working on it. Take a course. Do something. There are so many programs out there. You might not like one, so try another one. As hard as it is, there are great programs and great people who can assist you.

“It takes more than three days,” he added. “You can’t go to an event then go home and go under the camo in the basement. Keep reaching out. Keep calling your buddies, or have your buddies call you. It’s hard. It’s taken us quite awhile and it’s a slow process, but when you are around other Vets, it’s a lot easier.”