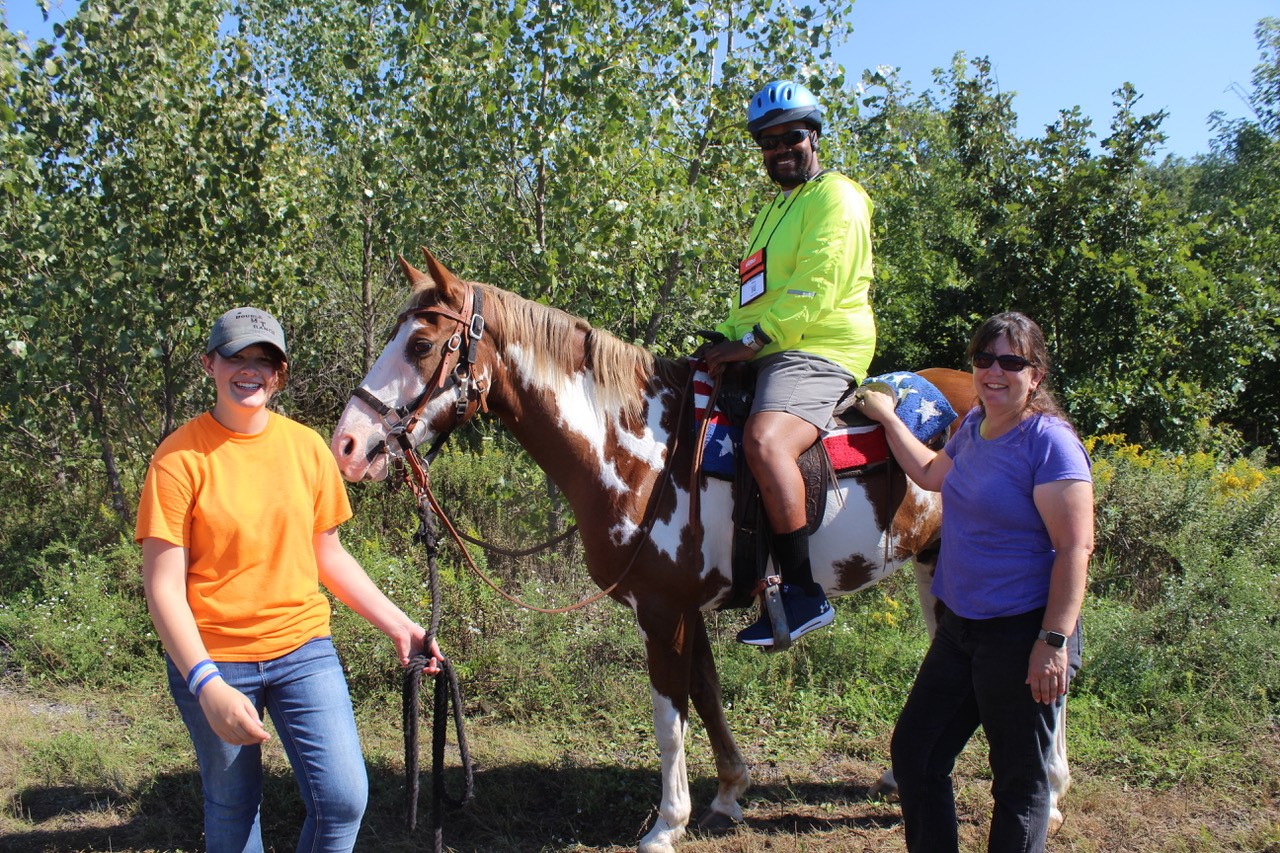 Disc golf is one of more than nine alternative activities available at the TEE Tournament, that has a goal of exposing Veterans to sports they can enjoy in their own communities.

Kristine Roberts doesn’t remember the motorcycle accident, but still deals with the after-effects — the badly damaged leg that never healed quite right, and a fear she just can’t shake.

But for one week a year – a week she looks forward to all year – she forces herself to put that fear to the side.

“Sometimes it just comes over me. I’ll be out there golfing, and I get afraid to hit that ball. Then I hit it and it goes far, and I tell myself, ‘I’ve got this,’” she said.

Roberts will be one of 260 Veterans from across the United States at the 26th annual National Disabled Veterans TEE Tournament, Sept. 8 to 13, in Iowa City. The event, which stands for Train, Exposure and Experience, takes Veterans who are blind, paralyzed or with other disabilities, and introduces them to a week of golf and other alternative sports activities.

Talk to the Vets and they’ll tell you they love it for the fun and camaraderie, but there is a deeper purpose

“Number 1 and most important, this is a rehabilitation event,” said Melissa Pierce, who oversees the alternative sports and recreation events that take place Wednesday during the TEE Tournament. “It gets people out there doing things they weren’t doing. If you sit around and feel sorry for yourself, you’ll never get better.

“I love it. I love it,” Pierce said. “I don’t know how to explain it. You see the difference and the change and growth in these Veterans, and it’s just so awesome.”

Besides golf, there will be more than nine alternative events taking place later in the week, including kayaks, disc golf and more. In the first story in the series, we looked at cycling, bowling and fishing, and now take a look at some of the other events offered to Veterans.

Blind, amputee and spinal-cord injured Veterans can all participate in rock climbing with a few adjustments at the TEE Tournament.

For the second year in a row, the Iowa Army National Guard will bring its climbing wall to the TEE Tournament, and modern prosthetic technology makes it a perfect adaptive sport.

Craig DiMartino, who lost a leg in a climbing accident, will oversee and help the climbers at the TEE Tournament.

“Oftentimes, Craig will harness up and get up, right next to them. If someone is blind, he is giving instructions — ‘You’re next hand moves four inches to the right at 2 o’clock.’ He is literally on the rope helping you figure out the next move.

“Usually when you have someone climbing, there is someone at the bottom, yelling up at you, but that’s not as good as having someone right next to you, talking you through smoothly and calmly.”

Werhane said anyone who thinks they can’t only needs to look as far as Dave Riley, a quadruple amputee and past national commander of DAV.

“Dave’s been up that wall several times,” Werhane said. “There is that ultimate feeling of accomplishment when you get to the top, and you hear someone say, ‘Holy crap! I made it!’”

“I can’t live a life of I should haves,” she said. “I just have to hold on and say, ‘I have to.’ Even coming to the TEE Tournament is scary for me at times. But I meet new people, I take a breath and I’m better.

— Kristine Roberts, on how she uses the TEE Tournament to push fear aside

Like a lot of Veterans, John Arbino thought life as he knew it was over when he ended up in a wheelchair from Multiple Sclerosis.

“You think, ‘I’m stuck. I can’t do anything I used to do.’ But you find out you can do everything.”

Arbino served on the all-Army shooting team while on active duty, and found he could still coach and shoot,

Blind Veterans have different options with air rifle, where volunteers help them zero in on their target.

despite the wheelchair. He typically teaches the air rifle at the National Veterans Wheelchair Games.

“We can adapt any sport to almost any disability. For amputees, the rifle sits in a stand and you use your good arm. Even for vision impaired, we have sensors on the target and on the gun that let you know when to fire.”

For those who prefer to shoot without sensors, volunteers can also direct shooters to the bullseye, which is Air Force Veteran’s Pamela Spisek’s preferred method. A genetic retinal disease took most of her sight at age 31. She can still make out objects and silhouettes, but can’t focus on faces or numerals on a clock.

“I’m kind of a mathy person, so when I shoot, the volunteer directs me. He tells me, ‘I’m hitting at 1 o’clock, so that tells me I’m about 2 inches off to hit the bullseye. That appeals to my more intellectual side.”

For Spisak, the week is more about the social interactions than anything else.

“I can actually see and walk around without tripping over things, but I can’t tell time, and I can’t identify people, but I can actually help people who can’t see as well as me get around. It feels good to be the one who can help people instead of needing help.

“My favorite part of the week is just hanging out with other Veterans and swapping stories.”

Veterans can ride a horse along a trail on the Riverside Casino at the TEE Tournament.

Roberts, who was in that motorcycle accident, said she’s getting too old for, “I should haves.”

She suffered a leg and traumatic brain injury in the accident which causes anxiety. But she said the TEE Tournament is the one thing she looks forward to each year to push all that to the side.

“I had never been on a horse before, and it was really scary the first time. I was scared to death,” she said. “I’m thinking, ‘Oh, my gosh, oh, my gosh, I’m going to fall off.’ But I made it through. And then I did it again!

“I found out I can even stand up, even though I have a bad leg, but it still makes me hold my breath. I told them I’m ready for barrel racing now.”

Michelle McLain-Kruse plans to bring five horses with her from Thunder Rode Therapeutic Riding to this year’s TEE Tournament. This is the eighth year her organization has worked the TEE event, providing trail rides around the resort.

“I think for sure, the horses are an empowerment piece,” she said. “Some will say they never rode before. It just does something for their confidence and spirit. We used to have some World War II Veterans come out and they would say they hadn’t been on a horse in 50 years and just wanted to do it one more time. It’s kind of nice to help them go down memory lane like that.”

McLain-Kruse said the annual trip almost feels like a pilgrimage as she sees Veterans from across generations connecting with one another.

“I see what it’s really like to be a Veteran, and it really is brothers and sisters in arms. Whichever part of the military these people served in, they’re all bonded, and you get conversations you won’t get anywhere else.

For people like Roberts, who gets her care at the Minneapolis VA Medical Center, it’s opened up a whole new life.

“I can’t live a life of I should haves,” she said. “I just have to hold on and say, ‘I have to.’ Even coming to the TEE Tournament is scary for me at times. But I meet new people, I take a breath and I’m better.

I look forward to this every year. I pull out my riding hat and my medals and I count the days 355 days until the next one. Before, it was a fear of everything. This just gives me the courage to go out and live.”